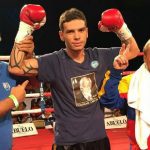 Roger Gutierrez is confident that he will get his revenge against Rene Alvarado.

In July 2014, Alvarado scored a seventh-round knockout of Gutierrez.

The pair will meet again on December 5, but this time Alvarado’s secondary junior lightweight title will be at stake when Golden Boy Promotions and DAZN return to the Fantasy Springs Resort Casino in Indio, California.

According to Gutierrez, much has changed in his game over the past three years.

“I have developed; I’m stronger; I’m bigger, and I have more experience to face Alvarado,” he told The Ring.

Gutierrez is also riding high with confidence after scoring a massive upset victory over a previously undefeated prospect last July.

The 25-year-old Gutierrez, who hails from Maracaibo, Venezuela, squared off against Rocky Hernandez, who entered the ring with a record of 28-0 with 25 knockouts, including 22 consecutive KO wins.

Gutierrez was bleeding from his mouth when he connected with a series of clubbing right hands to knockout Hernandez in the first round of their scheduled 10-round affair.

“I always have confidence in myself,” he explained. “With the Rocky fight, I went in there to win; I didn’t fight him for the money; I trained to win.

“The same goes for the rematch with Alvarado. I feel great and I will win. We’re training hard to win.”

When asked if he felt Alvarado was acting complacent about the challenges ahead, Gutierrez did not mince words.

“Based on some statements I have read, he is underestimating me and what I’m capable of doing to him on December 5.

“This is going to be a problem for him and his team. Mentally, I’m here to win and to raise that title in the air come fight night.”

Gutierrez isn’t a fan of getting ahead of himself, but he named a few fighters that he would be interested in facing following a victory over Alvarado.

“I would love to have a unification fight with (Ring No. 1 rated junior lightweight) Miguel Berchelt and (Ring No. 3 ranked contender) Jo-Jo Diaz.

“I also want to fight Oscar Valdez to show him that this division is tough. He should have stayed at featherweight.”

Gutierrez (24-3-1, 20 knockouts) has not fought since outpointing Andres Tapia over 10 rounds last December in Mexico. Alvarado (32-8, 21 KOs) knocked out former titleholder Andrew Cancio in the seventh round last November to snag the secondary 130-pound belt.

Will inactivity pose a threat to either fighter?

We will find out on December 5, but one thing is for sure, someone’s winning streak has got to go.

Alvarado is on an eight-bout tear, and Gutierrez is on a five-fight run.

“Like I said, I feel big and I feel strong, I believe I will be victorious,” Gutierrez concluded.

The post Roger Gutierrez is out to settle a six-year score against Rene Alvarado appeared first on The Ring.