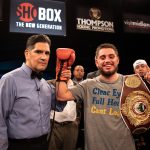 As he sat there, Ruben Villa thought it was a bad dream. But, someone in a surreal state of mind doesn’t feel throbbing pain. Why did he?

Villa still remembers it. He was seven, when his mother, Jessica, took him to the dentist. He was supposed to have a routine cleaning, but the dentist felt Villa’s two front teeth were loose, so he yanked them out.

With a wad of rosy gauze on his face, Ruben was being carted out into the dentist’s office lobby in a wheelchair. When Jessica saw this, she went nuts, yelling and screaming at the dentist about how this could happen.

Ruben, being seven, had bigger problems. How would kids react to him in school on Monday? More so, how would his boxing buddies at the gym respond?

He had a hole in the middle of his face framed by his two cuspids, which looked like fangs. Trainer Rudy Puga had a nickname for all of his young fighters. That day, Villa became “Dracula,” or “Drac.”

Every time Villa would go to a tournament, that’s how he was referred. Some kids didn’t even know his real name. They only identified Villa as “Drac.”

The 23-year-old southpaw featherweight from Salinas, California, is looking to ensure more know his name when he takes on Emanuel Navarrete for the vacant World Boxing Organization featherweight title this Friday (10 p.m. ET/7 p.m. PT) on ESPN from the MGM Grand Las Vegas Conference Center.

Villa (18-0, 5 knockouts) got the chance at Navarrete (32-1, 28 KOs) when Jessie Magdaleno opted not to sign the contract to fight the former WBO junior featherweight titlist. That enabled Villa to move up to the WBO’s No. 2 contender.

“Drac” has been waiting his whole life for this opportunity.

“I’m Ruben or ‘Boy’ at home (because he has four sisters); I’m ‘Drac’ everywhere else,” Villa said, laughing. “I remember when they started calling me ‘Drac,’ and remember I was embarrassed to go into the gym, because of my teeth.

“I may have been 10 when those teeth grew back. It took those teeth forever to come back.”

Unlike Villa’s rapid growth from prospect to contender in the last few years. He’s broken the shackles of being a “prospect,” even though his most recent victory, an easy 10-round decision over Alexei Collado in January, came on Showtime’s vaunted prospect series, ShoBox.

There’s been questions as to whether or not he could withstand the power of a former titlist like Navarrete.

Villa shrugs at the thought. He says this is the strongest he’s ever been entering a fight.

“I was able to work on just strength during the COVID-19 layoff, and I think this fight will bring out the best in me,” Villa said. “Right now, I’m super strong. I’ve been working on the things that I’ve been criticized about. I’m going to be the best Ruben Villa I can be.

“I know I’m fighting a champion and he’s someone coming to fight. I think I’m the bigger fighter. He’s not a natural featherweight. I am. He’s coming up to 126. It’s better for me. It’s only a four-pound difference, but at this weight, it’s a lot. Navarrete is known to be an aggressor.

“But I think he’s been through more wars than me. I feel like I’m the better fighter and I have the better team. I have to make it real and do what I’m capable of doing. I know what’s at stake here. I know what it would mean to win and look good doing it. I have a job to do right now, and millions may see it, but no one will be there.

“What hurts me is I get my chance to win my first major title and my family can’t be there with me.”

Max Garcia, who’s been training Villa since he was kid, says that Villa’s movement, southpaw stance and ability to control distance will make problems for Navarrete.

“We know we’re going to win,” Garcia said. “We are in a position where we have nothing to lose. Navarrete has something to prove at 126. He’s never fought anyone in his past who moves like Ruben and controls distance like Ruben.

“Navarrete has title fight experience and his extreme reach could cause problems, but he’s slow. I don’t see Navarrete being able to hit Ruben clean at all.”

“Navarrete’s skill set doesn’t even come close to Ruben’s,” Mirigian said. “Navarrete is a big puncher, but Ruben will put on a boxing display.”

That’s what Team Villa is counting on. Villa posted a 166-17 amateur record and was 2-2 against Shakur Stevenson, who vacated the WBO featherweight title that Navarrete and Villa are fighting for. As early as 7, Villa would pummel opponents, leaving them bloody.

“I call Ruben ‘Draccy,’ and even his hairdo made him look like Dracula. Ruben was always a good kid, who liked to laugh,” Garcia said. “But when you put in that ring, he became someone different. When Ruben was young, he could chop you up even then. Ruben came from a hard background in the fields, and I did, too. You appreciate hard work.

“It inspires you. Ruben is ready for this fight.”

Artie Pelullo, president of Banner Promotions, which co-promotes Villa with Thompson Boxing, feels Villa’s upward climb is right where it should be. Pelullo has been with Ruben since his pro debut and he knows the reality of Villa’s fight with Navarrete. He feels Villa can win. He knows many do not.

“Navarrete may think he can run right through Ruben, but this kid has a shot at being a star,” Pelullo said. “A long time ago, when I was in London, Mickey Dunn (the British heavyweight contender who challenged Muhammad Ali) told me something.

The post Ruben ‘Drac’ Villa will be looking for blood Friday night against Emanuel Navarrete appeared first on The Ring.