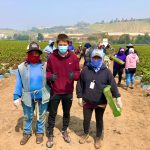 Ruben Villa’s morning runs through Salinas, California, were like running through hell. They came with an apocalyptic aura, because off in the distance were the fires lighting up a dawn sky barren of birds.

The air quality was horrendous. The skies were mushroomed dust clouds.

Villa had to take a few days off from running outside, opting to run inside on a treadmill with the doors and windows of the gym closed.

He has the added motivation of fighting for the Salinas farmers, whose livelihoods have been affected by the raging ‘gigafira,’ the first in recorded history that “burns at least a million acres of land and a level above a ‘megafire.’” Villa comes from the fields of California. It’s where his paternal grandparents, Ruben and Sylvia, met after arriving from Mexico. Compounding the farmer’s plight was working through the COVID-19 pandemic.

“Between the fires and COVID, I know how it affects farmers every day, and these farmers have to work in these poor conditions,” said Villa, who will be accompanied during his ring walk by Tom Alejo, one of 15 Vietnam vets who survived a rare bone marrow cancer. “I’m living through these fires, but these farmers, they have to work in it. I remember every day I run, everywhere in Salinas is covered by fields.

“I would run and see the workers covered up every day in the hot sun. That motivates me, seeing them out there day and night. I see their hard work. I look at the temperature on my iPhone and it says ‘poor air quality.’

“I have to do my job to help them do their job. That’s helping them in any way I can.” Rick Mirigian, Villa’s manager, came to Villa about ways that they could support out the farmers. It’s the same thing Mirigian did with Jose Ramirez, the WBC/WBO junior welterweight titlist who has aided farmers in the Central Valley region with their “Fight for Water” campaigns.

“I want to feel how they feel, to get it from the mud.”

“Jose and Ruben have a lot in common,” Mirigian said. “They’re both star fighters who know their roots. It’s why I got involved with Ruben. He has a big heart. He’s a caring individual. He’s connected to his community. Salinas is battling a major fire there, complicating the farm workers who are already at risk from COVID. We had to do something.”

Villa spent time in the fields recently handing out N95 masks and sanitizers to farmers. He’ll be auctioning off his gloves to help raise money for the agricultural workers and fire victims. It’s also why Villa will be wearing the Salinas city crest logo on his trunks, to bring awareness to what they are all fighting.

If not for the fields, Villa realizes, he might not even be here. Max Garcia, Villa’s trainer, once worked in the fields, too, getting a grand sum of 15-cents per box of strawberries.

“My grandparents worked in that heat and at two, or three in the morning, you’ll see these bright lights, and it doesn’t matter the conditions, and you’ll see them out there picking,” Villa said. “I had to do something to help them. I do feel a connection with the farmers. It makes my grateful that my grandparents made sacrifices for me to live, and it motivates the hell of me to do more.

“I want to feel how they feel, to get it from the mud.”

Villa then recounted a story while he was handing out the masks. He saw a mother and her teenaged son working in the field together. The son was backing his mother up as they collected heads of lettuce and strawberries.

“I always knew parents took their kids out there to work with them, but actually seeing it was a little different,” Villa said. “It’s makes me grateful, because that easily could be me. I can’t lose track of that.”

The post Ruben Villa is fighting Emanuel Navarrete with a special purpose this Friday night appeared first on The Ring.