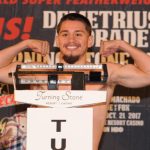 Unbeaten Ruben Villa is on the cusp of becoming another featherweight to be reckoned with in a very talented division. An impressive performance on Friday night could go a long way to making that a reality.

Villa will face his most difficult challenge to date against Luis Alberto Lopez at Omega Products International in Corona, California. The 10-round bout will headline a three-bout ‘ShoBox’ telecast that will air live on Showtime (10:30 p.m. ET/PT).

The 22-year-old Villa will face a stiff challenge in Lopez (17-1, 8 KOs), who resides in Mexicali, Mexico. In his most recent bout on February 28, Lopez defeated fringe contender Ray Ximenez by eighth round technical decision.

Lopez hopes to continue the momentum from the Ximenez fight but Villa is ready for what Lopez brings to the table.

“We had an excellent camp and had great sparring,” Villa told RingTV.com on Wednesday afternoon. “We trained at Robert Garcia’s gym in (nearby) Riverside. As far as Lopez, he is aggressive and likes to stick his chin up. We’re going to make necessary adjustments and take the fight to him.”

Villa, who is co-promoted by Thompson Boxing Promotions and Banner Promotions, was an amateur standout before making his pro debut in July of 2016. Villa has faced and easily defeated modest opposition thus far but is not looking past Lopez.

“I know he’s going to come to fight. I can’t overlook him,” he said.

Villa has not received as much fanfare as other unbeaten featherweights and prospects, such as Shakur Stevenson and Teofimo Lopez, to name a few. Villa believes he will receive more of a push later this year, especially on a platform like Showtime. Villa is also confident that a showdown against Stevenson, against whom he split four bouts in the amateurs, is inevitable.

“I’m very grateful thus far with where my career has gone,” said Villa, who is trained by Sam Garcia. “I’m glad to get the opportunities on Showtime. I was a little nervous fighting on (my) first ShoBox but once the first few rounds were behind me, I became more relaxed. I know a lot more is expected of me against Lopez. I’m going to be at my best for Friday night.

“I’ve known Shakur for a long time. We talk on social media. I pull for him when he fights and I know he pulls for me. We support each other and that’s what matters. We fought each other four times in the amateurs and I hope we can have the tiebreaker in the pros. I’d love to fight him. I think it would be a great fight.”

Villa has fought twice in his hometown of Salinas, California, and there have been discussions regarding a possible fight there later this year. Salinas is known as “The Salad Bowl of the World,” with miles and miles of vast farmland full of vegetables and fruit.

Always promoting his hometown, Villa has been recorded running down the dirt roads that cut through the farm fields, as a reflection of who he is and what he represents.

“I always enjoy running in the fields. It keeps me humble and I enjoy saying hello to all the farmworkers. They have a story and I know they have it very hard, working in all sorts of weather and conditions out there. I appreciate all the support from them.”

Villa adds, “Salinas is always special to me. It’s my home and I always want to see it do well. I want to continue representing my hometown well. It means a lot to me that so many people watch my fights and root for me. That’s why I always want to give back, especially to the kids.” The post Ruben Villa to step up against Luis Alberto Lopez on Friday appeared first on The Ring.