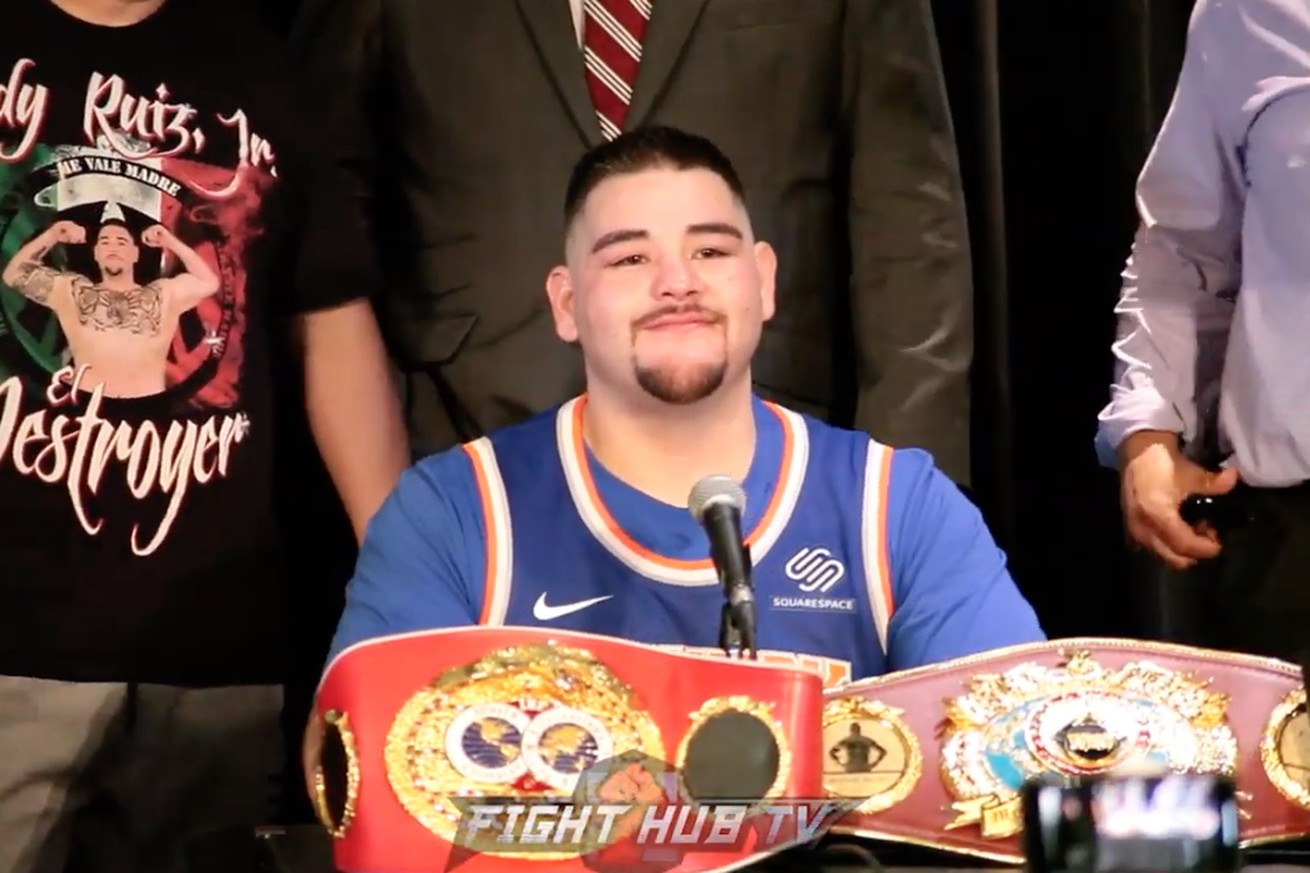 Andy Ruiz Jr made jaws drop the world over last night at MSG, stopping Anthony Joshua to lift the WBA, IBF, and WBO heavyweight titles in the main event, doing exactly what he said he’d do: prove everyone wrong and become world champion.

Ruiz spoke at the post-fight presser about what is by far the biggest win of his career.

“We’ve been working really hard, man, really hard. I wanted to prove everybody wrong, all the doubters thinking I was going to lose in the third round, first round. I was looking at comments, as well. But what do you know, man? I’m the first Mexican heavyweight champion of the world. It’s a blessing. … I’m still pinching myself to see if this is real, man! Wow. It’s amazing.”

On being knocked down in the third round

“When I was on the canvas I was, like, ‘Whoa, what the hell just happened?’ But I had to get him back. I think that’s the Mexican blood in me, the Mexican warrior that I have, I had to return the favor.”

“That’s the referee’s job. The referee knows what he’s doing. If he would’ve just let it go, I think I would’ve stopped the fight in more dramatic fashion, but he did what he had to do. The job was for him.”

On finding the openings

“I was waiting for him to open up. I wanted to break him down a little bit more, work the body. He hits really hard, man. He hits pretty hard. I just needed to be smart in there. I thought he opened up too much to where I could counter him. The speed, I think, got to him, and we got this victory.”

On his conversation with Anthony Joshua

On extra motivation being a big underdog

“Everyone’s been doubting me since the beginning, especially in this fight. Nobody wanted to know that I was gonna win. Nobody did. Everybody that bet on me is gonna make some serious money.”

On when he knew he could win

“Before this fight even happened, I called him out and said I’d rather fight AJ than any other heavyweight that had a belt. I knew that I could beat him. I knew my abilities were going to give him trouble, the speed, I knew that he opened up too much. And what do you know? … The speed, the movement. I feel I could’ve moved the head a little more and been more aggressive, but I just wanted to take my time each round and let my hands go when he let his hands go. That’s when I connected really well.”

On what he feels he exposed of Joshua

“The body shots. But he’s a warrior. He got up every single time I put him down. I got up when he put me down. I think we’re both warriors in there. I respect him and every boxer that gets in the ring, risking their lives to make history and to take care of their family. I respect every fighter.”

“(Joshua is) a warrior. He got up every single time I put him down. I got up when he put me down. I think we’re both warriors in there.”

On whether he was underestimated

“Everybody in this room underestimated me.”

On Manny Robles’ influence on his career

“Manny Robles has been on me since fuckin’ day one, man, calling me, like, ‘Where are you at? You need to come to the gym!’ But you know what? All that paid off. He told me I was gonna thank him this time, and thank you, man. My dad, as well.”

“I didn’t want to leave it to the judges for this fight. I knew if it would’ve come out a decision, I don’t think I would’ve got the victory. I had to fight hard, let everything out in that ring. What do you know, we got the victory.”

On what his plans are now

“I just want to keep fighting. Keep making legacy, you know, and become like a Canelo Mexican heavyweight. That’s what I’m trying to do, make a legacy and a big name for myself, and I just proved that.”

On Joseph Parker, Ruiz’s only loss

“I don’t really care. When I fought him, I trained myself. A lot of people don’t know I trained myself for that fight. I feel I won, and now I have the WBO championship, so I’m just happy. I just wanna take this moment with my family, my kids, and just enjoy it.”

On Joshua looking past him

“I think they looked over me. I feel they should have paid attention to me first instead of thinking about plans for Wilder or Tyson Fury. I’m a dangerous fighter, as well. I feel they underestimated me and started planning to fight other fighters instead of focusing on me.”

On why he was underestimated

“I think just the way I look. The extra flab that I carry, but we’ve been working on it since we fought Dimitrenko. After we got this fight right away, we didn’t want to lose much weight. I wanted to be strong. I actually gained five more pounds just to be a little stronger because Anthony’s a big guy. But now that I have this time, I just want to get in really good shape and look like a Mexican Anthony.”

“I just want to get in really good shape and look like a Mexican Anthony.”

On his first knockdown

“I’d never been on the canvas until today, and I got up. That’s the real warrior that I am. A lot of fighters they go down and they get back up, and they keep fighting and fighting until they win, and that’s exactly what we did.”

On his final words for everyone

“We did it, baby. All the people that believed in me, we did it. Everything that I said came true. All the doubters, too bad, man.”