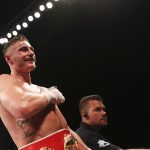 Bantamweight contender and former unified titleholder Ryan Burnett returned to the ring Friday night, stopping Jelbirt Gomera in the sixth round at Ulster Hall in his hometown of Belfast, Northern Ireland.

Burnett was fighting for the first time since losing by technical knockout in a freak accident at the hands of Nonito Donaire on Nov. 3. During the fourth round of the quarterfinal bout of the World Boxing Super Series (WBSS) bantamweight tournament, Burnett sustained a back injury while throwing a punch, causing him to take a knee. After the conclusion of the round, Burnett was not able to continue and had to be carried out of the ring on a stretcher.

The 26-year-old Burnett, who is currently ranked No. 6 by The Ring, would lose the WBA title.

With Donaire at ringside, along with Carl Frampton and Michael Conlan, Burnett boxed effectively from the opening bell. Despite mostly having his hands down, Burnett moved in and out of Gomera’s range, enticing the southpaw Gomera to throw in an attempt to counter with straight right hands to the head.

Gomera would connect with lead left hands to the head after walking Burnett down. Gomera would let his hands go whenever he had Burnett trapped in a corner, but of his punches landed on Burnett’s arms or he would miss.

Burnett, who recently signed a co-promotional deal with Top Rank, finally took initiative in round three, connecting with several lead right hands to Gomera’s head. Gomera was forced to fight defensively as Burnett began to land with more frequency with each passing round.

Early in round six, referee John Latham deducted a point from Burnett for landing a low blow on Gomera. Latham had warned Burnett at least twice earlier in the fight.

The point deduction did not deter Burnett as he continued his attack to the body of Gomera. After Burnett landed two left hooks to the body, Gomera turned away and walked back to his corner, forcing referee Latham to halt the bout at 2:01.

“It felt great to be back,” said Burnett after the fight. “I felt a little bit rusty, but I recovered quick. I (am glad I) got the win.”

Burnett stated he would fight at junior featherweight and is open to a rematch with Nonito Donaire, who will face the winner of Saturday’s fight between Naoya Inoue and Emmanuel Rodriguez in the final of the WBSS tournament.

Gomera, who resides in La Trinidad in the Philippines, drops to 14-6 (7 KOs).

In round three, McCullough (22-4, 12 KOs) landed a straight right hand to the chin of Geraghty, dropping him flat onto his back. Geraghty (18-4, 4 KOs) struggled to get up, prompting Steve Gray to wave the fight off at 2:23.

Junior welterweight Sean McComb (7-0, 4 KOs) remained unbeaten by stopping Miroslav Serban (11-3, 8 KOs) at 1:24 of the opening round. McComb trapped Serban in a corner and battered Serban before referee Hugh Russell, Jr. stepped in and stopped the bout.

Middleweight prospect Steven Donnelly (5-0, 1 KO) knocked out Nicaragua’s Edwin Palacios in round four with a left hook to the body. Referee Paul McCullagh counted Palacios (12-8-1, 8 KOs) out at 1:18.

The post Ryan Burnett returns from injury with sixth round stoppage of Jelbirt Gomera appeared first on The Ring.