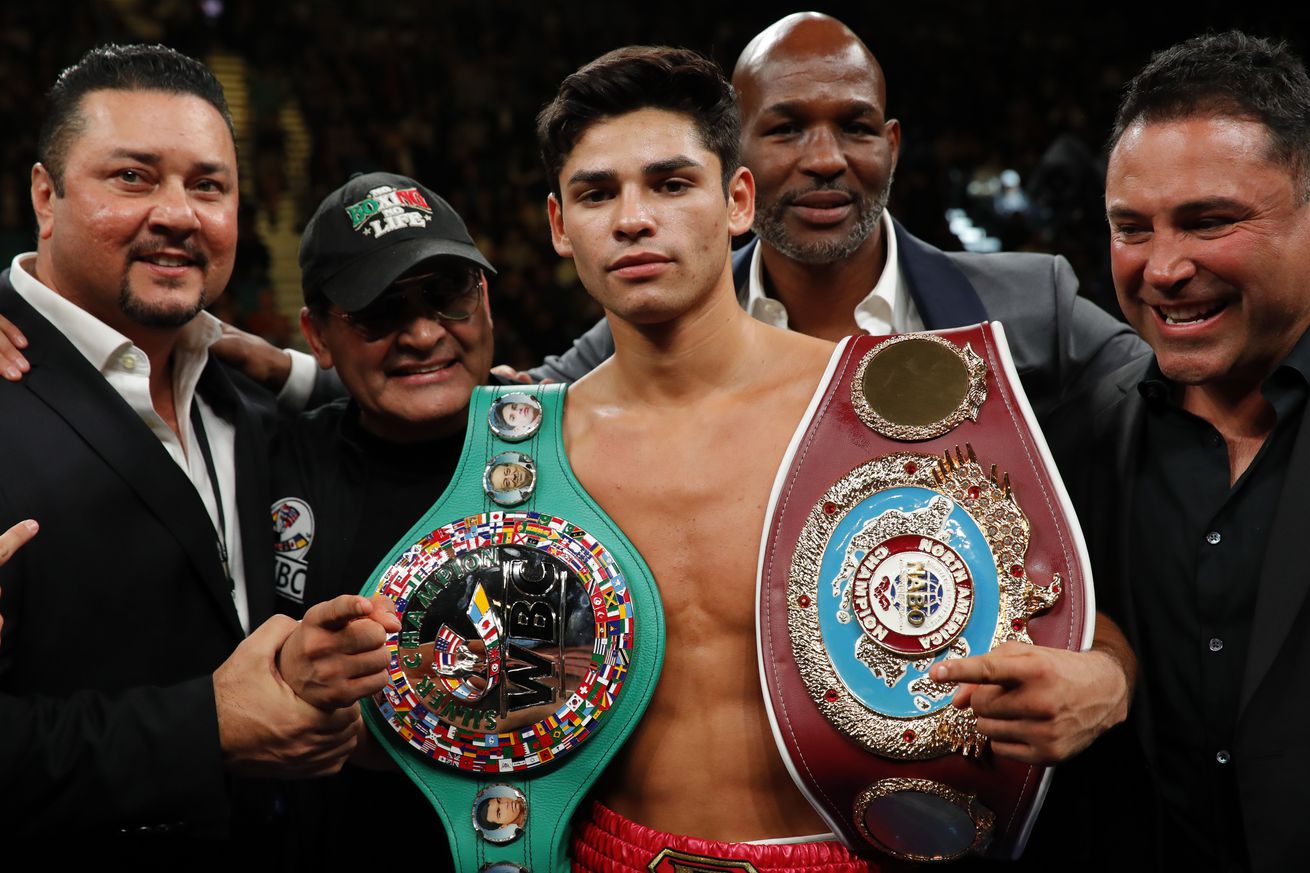 Garcia gave his thoughts on his lightweight rivals, and says he has no respect for world titles in boxing today.

Top lightweight prospect Ryan Garcia was a guest on The Ak & Barak Show and gave his thoughts on various topics, from his potential 135-pound rivals to what he sees as a bunch of “gifted” world titles in the boxing world.

The 21-year-old Garcia (20-0, 17 KO) last fought on Feb. 14 in Anaheim, knocking out Francisco Fonseca in 80 seconds. It was another quick win for the California fighter, trained by Eddy Reynoso, his third straight in two rounds or less.

The hosts posed a question about his confidence when facing potential rivals in WBC titleholder Devin Haney (24-0, 15 KO) or Gervonta Davis (23-0, 22 KO), and he warned both that he’ll only be getting better.

“I’m just looking at the facts. The facts are, you see Devin Haney’s last fight, you see Gervonta’s last fight, then you look at my last fight, and you tell me who’s gonna win,” Garcia said, talking about Davis’ win over Yuriorkis Gamboa in December and Haney’s win over Alfredo Santiago in November.

“Gervonta nor Devin Haney didn’t fight no top-level dude. Devin didn’t fight a top-level dude and didn’t look good, and Gervonta looked horrible. I’m still training harder and even better than I was before, so I’m only gonna get better. Do not underestimate me, and even if you do, just don’t bet money against me, because I promise you, you’ll probably be losing that money.”

Garcia was possibly going to be facing Jorge Linares this spring — that was Golden Boy’s plan, and both fighters wanted it, even if Garcia’s trainer Reynoso seemed reluctant — but that fight is off the table for now, as Linares is in Japan, where he lives, and can’t travel due to COVID-19 restrictions.

That leaves Garcia’s next move up in the air. He’s said he is looking to return on July 4, but given the travel issues, his opponent wouldn’t likely be anyone to get excited about. He also doesn’t think he’d have silenced many doubters even if he’d fought and beaten Linares.

“I’m in a very tricky situation. Obviously I can’t get that Linares fight because of travel restrictions or whatnot, so I’m looking elsewhere,” he said. “But I’m definitely not gonna get any type of credit for any victory I’m gonna get if it’s not Linares.

“And even if it was Linares, let’s be honest, people have already got those excuses lined up. They’re gonna Linares was old and they’re gonna say that he has no chin when I catch him. I’m already ready for it, but I do know that no matter who I fight, I’m gonna keep moving forward. As long as I’m in the ring, fighting, it’s gonna be good for me.”

With his time on the sidelines with everyone else, Garcia has had several social media beefs, one including former three-division titleholder Abner Mares, who has never fought north of featherweight, hasn’t fought in two years, and has an eye issue that could severely hamper him going forward.

“Hopefully I can get Abner Mares in the ring, but he might price himself out — which is OK, but he called me out,” Garcia said. “I wasn’t worried about him. He’s a little guy, little dude, little man. So I definitely would not want to hurt him. I don’t wanna hurt nobody, but I will hurt him. He’s a very little, little man. But he called me out, he really went for it. So I’m, like, ‘OK, if you really want that work, I’m gonna knock you out. I’m not gonna get credit, but I don’t care. I’m just gonna knock you out.’ If we could get that fight going, but probably not.”

Another name on the Garcia radar has been IBF titleholder Teofimo Lopez (15-0, 12 KO), the 22-year-old Top Rank star who is looking, at some point, to unify against WBA/WBO titlist Vasiliy Lomachenko. That fight was supposed to be happening this weekend — tonight, in fact, but has been pushed back like everything else. The latest word is it could happen in September.

Lopez has been another guy beefing with Garcia in the meantime.

“I literally was, like, ‘Man, he’s definitely desperate.’ But I don’t know. I have to pick and choose who I respond to, because at the end of the day — he’s a good fighter, don’t get me wrong, he’s a great fighter and I have respect for his skills. But I just think he’s as desperate as they come,” Garcia said, before launching into a rant against “world champions” in boxing, specifically those who have called him out or criticized him.

Being honest, Garcia’s thoughts on world titles in boxing are shared by many fans and pundits out there, and sometimes even fighters in specific cases. Haney, for instance, has been ripped by Lopez for being an “email champion,” having never actually won his full WBC title in the ring, as he was elevated from interim to full status only after the WBC also “promoted” Lomachenko to their made-up “franchise” designation.

And speaking of Lomachenko (14-1, 10 KO), Garcia admits he does see the 32-year-old Ukrainian star as the best in the division right now, but he thinks his old amateur rival Haney may overtake him soon.

“Right now, it’s Lomachenko, but in the future, it’s gonna be Devin Haney,” Garcia said. “He’s the toughest one out of them. Teofimo’s got little arms, and Gervonta Davis is too short. That’s just my experience in combat. I know how to fight. I’ve been boxing since I was seven years old. I know these guys, they’ve got a lot of good attributes, but they will not be able to keep up with me. I promise you that. It would actually be easier than you think.

“But Devin Haney and Lomachenko, those are two guys who are just at a different level, in my opinion.”