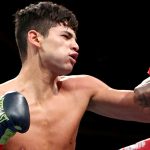 The lightweight clash between Luke Campbell and unbeaten Ryan Garcia has been rescheduled for Saturday, January 2, it was announced Friday.

The fight will stream live on DAZN.

The 12-round bout was originally scheduled to take place at the Fantasy Springs Resort Casino in Indio, California but was postponed last Tuesday after Campbell announced he tested positive for COVID-19.

There was talk of Garcia (20-0, 17 knockouts) facing a handful of opponents as replacements on the same date and on December 19, including former WBA titleholder Jorge Linares. Both Garcia and Linares fought on the same card on February 14 in Anaheim, California and were penciled to fight in July before the pandemic worsened, postponing or canceling fight cards worldwide.

Garcia, who was born and raised in Victorville, California, is eager to face the upper echelon of a talented 135-pound division with a decisive win over Campbell.

“My mindset going into this fight hasn’t changed, and my training hasn’t stopped,” said Garcia. “I’m excited we have a new date and can finally bring this to the fans. I’m here, and I’m ready to ring in the new year with a victory.”

Campbell (20-3, 16 KOs) completed his 14-day quarantine and “was feeling good” in a message he posted on social media. The 33-year-old, who resides in Hessle, England, has not fought since August 31 of last year, losing by unanimous decision to Vasiliy Lomachenko.

Despite also losing by split decision to Linares in September 2017, Campbell is confident his amateur pedigree as an Olympic Gold medalist and having faced the more-polished opposition between the two will lead him to victory.

“New date, new year, same result,” said Campbell, who is promoted by Eddie Hearn. “I’m fully back in training and have never felt better. What a way to start 2021. This is going to be a clinical Luke Campbell win.”

Garcia and Campbell are ranked No. 4 and 5 by The Ring, respectively.

The post Ryan Garcia vs. Luke Campbell rescheduled for January 2 appeared first on The Ring.