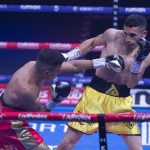 Ziani (32-3-1, 7 knockouts) stunned the Englishman in the 11th and the follow up in Round 12 was breathtaking. In what had been an all-action, high-contact fight, the champion incredibly summoned the strength to release prolonged two-fisted bursts from which there was no escape. Referee Giusseppe Quartarone did Dilmaghani more than one favor as Ziani sought the finish, but he waved the bout off following two official knockdowns in the closing seconds.

The pace was fast from the start and the 29-year-old Dilmaghani looked very sharp. However, it didn’t take long for the champion to find his groove and the left hand began landing with ominous regularity. The action took place at mid-to-close range almost exclusively and it was of a very high standard.

There wasn’t much to separate the pair in the first half, but while Ziani was putting more punches together, the Englishman was more accurate and his variety was eye-catching.

A cut opened up under the eye of Dilmaghani at the end of the sixth, and the visitor, as had become a habit, closed that session very well. This was the beginning of a huge drive from Ziani, who utilized his advantage in experience to pressure the Englishman when his energy began to decrease.

Dilmaghani (19-2-1, 8 KOs) fought back gallantly, though, and the cuts were evened up when a clash of heads opened up a wound over Ziani’s right eye in the ninth. The challenger also showed smarts by attacking the body, but he could never dissuade his opponent’s relentless forward march.

A withering attack from Ziani hurt the challenger in the 11th and the challenger’s legs buckled. That was the turning point in the fight and Dilmaghani was unable to regain his composure.