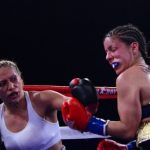 After fighting across the border in Mexico in her most recent bouts, junior flyweight contender Seniesa Estrada will finally fight at home.

Estrada returns to the ring on June 13, when she will square off against Gretchen Abaniel at The Avalon in Hollywood, California.

The 10-round bout will headline a ‘Golden Boy DAZN Thursday Night Fights’ card that will be streamed live on RingTV or on Facebook Watch via the Golden Boy Fight Night Page (10 p.m. ET/ 7 p.m. PT).

Estrada (16-0, 6 knockouts), who resides in East Los Angeles, last fought on Feb. 22 in Tijuana, stopping Venezuela’s Yenifer Leon after the fifth round. The 26-year-old Estrada has garnered a modest following in and around the Los Angeles-area, which Golden Boy Promotions, which promotes her, attributes more to her fan-friendly style.

“We chose Seniesa to headline the (June 13) card,” Golden Boy Promotions matchmaker Roberto Diaz told RingTV. “She’s progressed really well. I’m very impressed. You can see the hard work she puts in the gym. People will say she has no punch, (but) she has four knockouts in her last five fights. I think she’s convincing people that not only can she box, but she can punch as well.”

“There are some big plans for her by the end of the year.”

Estrada will defend her regional title belt against Abaniel. Estrada has won her last four bouts after notching three consecutive victories by decision.

Abaniel (18-10, 6 KOs), who is originally from Puerto Princesa City in the Philippines, was stopped in her last bout by WBO female junior flyweight titleholder Tenkai Tsunami on July 29. Abaniel has lost her last two bouts after winning her previous three.

Including the loss to Tsunami, the 33-year-old Abaniel has fought for a world title belt six times, losing all six times.