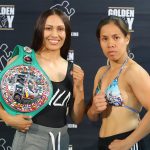 With the victory, Estrada improved to 17-0 (7 knockouts).

In her last bout on Feb. 23, the 26-year-old Estrada stopped Venezuela’s Yenifel Leon after the fifth round in Tijuana, Mexico. She has displayed more aggression and power in recent fights, having stopped her previous four opponents entering Thursday’s fight.

Estrada, who resides in nearby East Los Angeles, was on the attack from the opening bell against Abaniel, initiating exchanges and landing often with counter or lead left hooks to the head. Abaniel, who was stopped by WBO junior flyweight titleholder Naoka Fujiola in her previous fight on July 29, attempted to fight in the pocket, but was not able to keep Estrada off of her.

A cut from an accidental head-butt open along the left scalp of Estrada early in round three, which might have prompted Estrada to go on the attack for fear the fight would get stopped and be declared a no-decision.

Estrada’s best round was the fourth, where she connected with several combinations to the head and body. After the fourth round, Abaniel, whose face was bruised from the amount of punches she received from Estrada, did not answer the bell for round five.

With the win, Estrada could be in line for a world title fight. There is also the possibility she could face fellow junior flyweight contender and unbeaten Marlen Espinoza, who won a bronze medal at the 2012 Olympic Games.

Estrada is open to fighting Esparza, with whom she has exchanged hostilities on social media, or for a world title belt.

“Everyone knows about the rivalry between me and Marlen Esparza,” said Estrada after the fight. “Eventually, this fight is going to happen. She can get it any time. For now, I want a title shot. I want to face (WBC titleholder) Yesenia Gomez. Let’s make it happen in September.”

Abaniel (18-11, 6 KOs), who is originally from the Philippines and now resides Roselands, Australia, has now lost her last three fights.

Hovahannisyan, who is originally from Armenia and now resides in the Los Angeles suburb of Glendale, battered the outgunned Porras from the opening bell. Despite Porras’ grit and toughness, Hovhannisyan landed at will, bruising Porras’ face from the number of punches landed.

The 30-year-old Hovhannisyan continued to land at will, and after pinning Porras in a corner and battering him repeatedly, referee Sharon Sands stepped in and stopped the bout at 2:08.

Hovhannisyan has now won his last three bouts since his unanimous decision loss to WBC junior featherweight titleholder Rey Vargas on May 12 of last year.

Porras (32-9, 20 KOs), who resides in Cotabato in the Philippines, has now lost four of his last seven bouts.

In the opening bout of the Golden Boy-DAZN ‘Thursday Night Fights’ telecast, bantamweight prospect Carlos Caraballo (12-0, 12 KOs) knocked out Esteban Aquino of the Dominican Republic in the second round. A counter left cross from Caraballo dropped Aquino (12-7, 7 KOs) to the canvas, where referee Zac Young counted Aquino out at 1:52.

All three judges scored the bout 79-73 for Valenzuela, who improves 15-6-1, 5 KOs. Gonzalez, who resides in nearby Buena Park, has now lost three of his last four bouts.

In light heavyweight action, Bektemir Melikuziev knocked out veteran Martin Rios (23-20-4, 13 KOs) with a body punch at 1:39 of the opening round. Melikuziev won a silver medal at the 2016 Olympic Games in Rio de Janeiro.