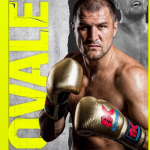 When you make TMZ, sometimes it’s a positive, sometimes it means negative news, for those in the boxing sphere.

Sergey Kovalev, the 37 year old light heavyweight ex titlist, got some coverage on the gossip/news site, and no, it’s not for a high-profile comeback to the ring for the Russian hitter.

On Friday, Kovalev pled guilty to charges stemming from a June 2018 incident involving a California woman. The 34-4-1 boxer, last seen in a ring on Nov. 2, 2019, against Canelo Alvarez, got charged with assault, after the complainant said that the athlete got rough with her after they began to canoodle.

After kicking her dog, Jamie Frontz asserted, Kovalev then struck.

But the charges were reduced, to a misdemeanor, so, TMZ reported, the Cali resident Kovalev will have to do three years probation misdemeanor for fighting/noise/using offensive word. A mandated two-day jail stint, also part of the sentence, got satisfied, as time served.

Kovalev is promoted by Main Events and managed by Egis Klimas, who also handles the Ukrainian technician Vasiliy Lomachenko, a lightweight master who fights Oct. 17 against Teofimo Lopez. Klimas offered a “no comment” when contacted by RING and we haven’t heard back with a statement from Main Events at the time of posting.

The fighter as yet hasn’t updated his fans on his Instagram, regarding the legal matters reaching this juncture, either.

It has been an “interesting” run for Kovalev, of late. He had some luck in that outing against Canelo, normally a middleweight, but the power element of his offense wasn’t on message.

In round 11, Canelo reeled off some power shots–a right cross started it, a left hook hurt him, and a right hand landed nastily–and stopped out the Russian, for the third time. He’d been stopped by Andre Ward, in their 2017 rematch. Then, after gaining two wins against lesser level foes, he got finished by Eleider Alvarez in a 2018 collision.

Kovalev won back some people who thought he was at the end of the line when he beat Alvarez in a February 2019 rematch, however. But then he shed followers, again. After the Canelo loss, Kovalev explained that he came back to the ring quicker than he’d have liked, after beating Anthony Yarde Aug. 26, 2019, and that rendered him ineffective. Canelo called him a “bad loser.” It is possible that Kovalev’s mind drifted, to the legal scrums, with a criminal as well as a civil suit in play for the June 2018 Big Bear incident.

In January 2019 an attorney for the woman who called the cops on Kovalev, and has take to social media to state her case since the, said she was suing the boxer, who lives in Cali, for $8 million dollars. Frontz, above in screen-grab from TMZ hit, has been aggressive in sharing details of the altercation with Kovalev. The website has chronicled most every step of the June 2018 incident.

On Feb. 24, 2020, a report dropped that Kovalev got snagged for DUI, late night in California. His backers, however, hoped he’d get back on the right track, with a fight versus Barrera, on April 25. COVID messed up plans everywhere, though. Barrera looked to unnerve the Russian, in June telling the press he hoped Kovalev “wasn’t back on the vodka.”

I reached out to Golden Boy Promotions, to get a sense of whether this Barrera v Kovalev tango is still in the cards. GBP matchmaker Robert Diaz said yes, GBP still wants to do that fight.

And, we’d imagine, pending where Kovalev’s head is at.

People sometimes forget or don’t know that boxers are people too. Their emotional state can and does affect their prep for a fight and sometimes their level of efficacy on fight night. Sergey Kovalev has had to contend with a myriad of out of the ring battles–maybe you recall in November 2017 he admitted a near fatal car crash and meeting with monks in Greece had made him see the light–so it does remain to be seen if and when he decides to lace up the gloves for in-ring combat.

The post Sergey Kovalev receives probation for 2018 altercation with woman in California appeared first on The Ring.