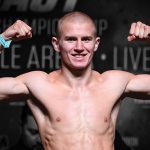 Both 10-round bouts, which were announced on Monday, will take place at the Wild Card Gym in Hollywood, California and will air live on NBC Sports Network (9 p.m. ET/ 6 p.m. PT).

November 19 will mark the premier of Ring City USA, which is a new boxing television series. The main event will feature a junior lightweight clash between O’Shaquie Foster and Miguel ‘Mickey’ Roman.

“We are excited about the quality of the fights Ring City is delivering to fight fans,” said Ring City USA’s Head of Boxing Evan Rutkowski. “As a developmental platform, our mission is to put together the most competitive matches that challenge our fighters and entertain viewers. Bohachuk-Adams and Conwell-Ashkeyev are two matchups that we are confident will meet those goals.” Bohachuk has won all of his bouts by stoppage. Photo by German Villasenor

Bohachuk (18-0, 18 knockouts), who is originally from the Ukraine and is now being trained by Manny Robles in the Los Angeles area, has continued to demonstrate power and an improving skill-set while facing better opposition. In his last bout on September 25, the 25-year-old Bohachuk won by technical knockout after Alejandro Davila remained on his stool after the sixth round.

Bohachuk understands Adams will be a significant step-up in opposition, one he believes he is ready for.

“I’m looking forward to fighting Brandon Adams,” said Bohachuk, who is co-promoted by Tom Loeffler (360 Promotions) and Ural Boxing. “He’s an experienced challenger who has already fought for a world title and I am up for this challenge.”

Adams (21-3, 13 KOs), who resides in the Los Angeles suburb of Norwalk, lost by unanimous decision to WBC middleweight titleholder Jermall Charlo in his last bout on June 29 of last year. Adams had won his previous four bouts, all on ‘The Contender’ series, since his previous loss to John Thompson in May 2015. Jermall Charlo hit Brandon Adams with his hardest shots but could not stop the fringe contender. (Photo by Tim Warner/Getty Images)

The 31-year-old believes his experience and fighting better opposition will be enough to lead him to victory.

“I appreciate this challenge,” said Adams. “Bohachuk’s team thinks he is ready to fight at the top level and my team is confident that I am already fighting at that level with the top fighters in the sport.”

Conwell (13-0, 10 KOs), who resides in Cleveland, Ohio, last fought on October 7 in the main event of a ‘ShoBox’ telecast, knocking out Wendy Toussant in Round 9. Conwell has now stopped five of his last six opponents.

The 23-year-old Conwell is promoted by Lou DiBella and managed by David McWater.

Ashkeyev (14-0, 7 KOs), who is originally from Kazakhstan and now lives and trains in the boxing hotbed of Oxnard, California, has not fought since stopping Rodolfo Ezekiel Martinez of Argentina on November 9 of last year.

The 32-year-old Ashkeyev is managed by Egis Klimas.