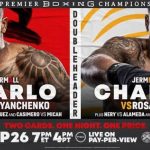 The SHOWTIME PPV® event, titled “Charlo Doubleheader,” will be available for purchase at a suggested retail price (SRP) of $74.95.

It includes six fights, five of which are defined as world title bouts.

The Charlo Doubleheader is scheduled to begin at a special time of 7 p.m. ET/4 p.m. PT, can be purchased for live streaming and via cable and satellite pay-per-view providers.

The announce team will be comprised of veteran sportscaster Brian Custer as the studio host. Mauro Ranallo will handle the blow-by-blow action alongside Hall of Fame analyst Al Bernstein and four-time world champion Abner Mares.