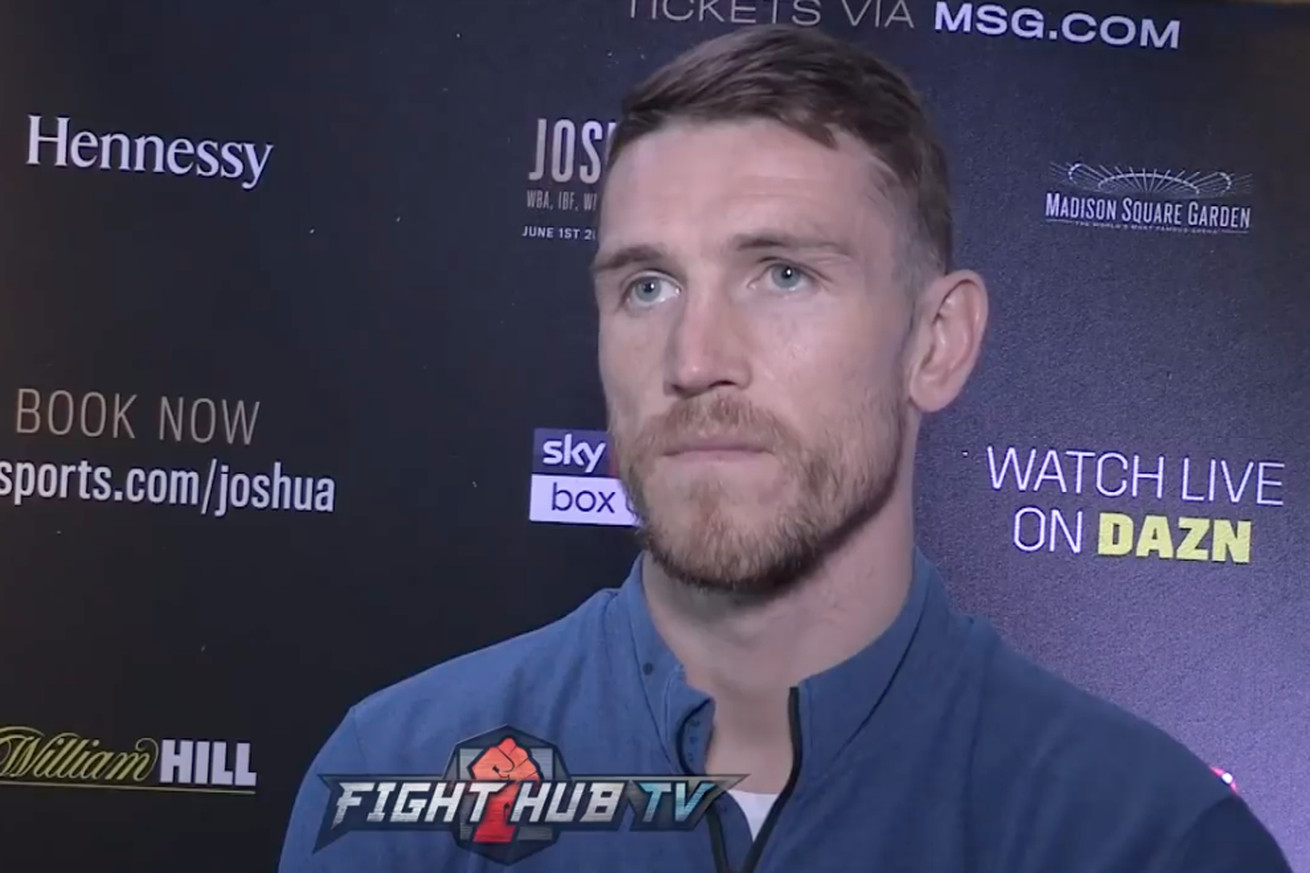 Callum Smith sees himself as one of the biggest threats to Canelo Alvarez, and more.

Smith talked about that fight, returning to the ring after a break, his thoughts on Billy Joe Saunders at 168, and his chances against Canelo Alvarez.

On getting back after the birth of his first child

“I had a bit of time out to enjoy it, but then — it sounds terrible, but it’s been good to be back in camp and give myself a bit of a routine again, get out the house for a few hours, then I go back and it’s back to being a dad again. I wouldn’t change it for anything. I’ve had a very good camp, I’m in good shape. I’m here to do a job and there’s still a lot of things I want to achieve in boxing before I finish and become a full-time dad. I’m only young. There’s a lot of big fights out there for me and a lot of winnable fights for me to achieve before I’m done.”

On fighting at Madison Square Garden

“I’m very excited. I was offered a few different dates and a few different locations, and this one appealed to me most. Madison Square Garden, it’s a massive box to tick for any fighter. I don’t stand alone saying it’s a venue I’d love to fight at. People have asked why am I not headlining my own show, and rightly so, I do believe I could headline, but an Anthony Joshua gets more eyes watching it than probably any other show in the world. It’s a massive platform and a platform I plan on taking advantage of.”

On sparring history with Hassan N’Dam

“We sparred before the Groves fight, he helped get me prepared for that one. He’s a good mover, he moves quite a bit. I think he’ll plan on making it as hard as possible for me to attack him. He’s awkward and experienced, a former champion at middleweight. He’s been in with some top fighters and always held his own. It could be a tricky night for me, but I’ve always said in the past and now, if I turn up and perform the way I know I can, I’ll beat any fighter at (168) and Hassan N’Dam is no different.”

On N’Dam making it awkward

“On paper, it’s not a fan-friendly style to look good against, but if I perform the way I know I can and we get the tactics spot-on, then I believe I can win in a fan-friendly style and I can take him out. I think his goal will be the exact opposite, to make it as hard for me as possible, spoil it and take me into the later rounds. I’m prepared for whatever he brings, I believe I’ve got better.”

“He’s stepped up, he’s won a belt, he’s put himself in the mix. As long as you’ve got a belt in any division, you’re always in the mix for the big fights. I want to look to unify, whether it’s Billy Joe Saunders, Caleb Plant, Anthony Dirrell, I believe David Benavidez is going to fight (Dirrell) for the WBC. They’re the fights that excite me, they’re the fights that motivate me. We’ll take care of business June 1st, then we’ll sit down with the team and see what fight works best for me. I’ll get in and I still believe I can beat any fighter at (168), regardless of who moves into the division, who moves down, I’m the best super middleweight in the world.”

On Saunders maybe being better at middleweight

“Most definitely. He won, he won well, but I don’t believe the opponent was the best. He felt a shot in the middle rounds, he took a shot and his legs went a little bit. I think that shows he’s not a genuine super middleweight. He’s a very good fighter, he’s got bags of talent, but I think his best performances and best wins will be down at middleweight. I understand the opportunities weren’t there for him at middle and that’s maybe why he moved to super middle. I don’t know what the future holds for him, whether he stays or moves back down. But if he stays at super middle, then he’s definitely a possible opponent in the future.”

“People are looking for potential opponents and styles to beat Canelo Alvarez, and I think my odds are probably one of the best chances.”

On Canelo Alvarez maybe moving up

“I don’t know. I know the fighter he is, he’s all about setting goals and achievements, he wants to become the best Mexican fighter ever. I think there’s still fights for him at middleweight, I don’t think he moves up any time soon. But once he’s cleared out the middleweight division and there’s no big fights for him, I do believe he’ll move up. But I can’t base my career on chasing the Canelo Alvarez fight. I’ve got to just keep winning, keep doing what I’m doing, and put myself in the position that if he does move up, or when he does move up, the only fight that makes sense is to fight me.”

On how a fight with Canelo would go

“I’d smash him. (laughing) No, he’s a very good fighter, he’s a special fighter, but similar to Billy Joe Saunders, I believe he’s a better middleweight than he is a super middleweight. People don’t realize the jump to super middleweight, we’re a lot bigger. As good as his boxing ability is, it can only make up for so much size. I believe I’ve got a little ability myself to match my size. I think it makes that fight a little bit more interesting. People are looking for potential opponents and styles to beat Canelo Alvarez, and I think my odds are probably one of the best chances.”

One thought on “Smith: I have one of the best chances of beating Canelo”