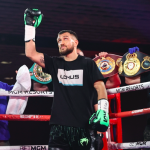 Word dropped today (Tuesday) that Vasiliy Lomachenko had surgery on his right shoulder, which had previously needed surgical work, days after he got taken over by a brash rival with an NYC edge who talked a good game and fought an even better one.

The Ukrainian ace came in to his Saturday, Oct. 17 clash with Teofimo Lopez seemingly in a zone, and not even a hint of a leak dribbled out that he was less than 100% entering the fight with ‘The Takeover’ specialist.

But a Tuesday story from Kevin Iole, on the Yahoo platform, told readers that Lomachenko had been bothered by pain some six weeks before the event.

Physician Dr. Neal S. ElAttrache performed a procedure Monday on Loma, and Top Rank’ bossman told Iole that Loma hadn’t mentioned anything about the shoulder in the lead-up to the titles defense. Lopez’ manager, David McWater, learned that Team Loma told Iole he experienced pain throwing his right hook during the fight.

McWaters’ response, to RING? “One thing is for sure if he injured it early it wasn’t from throwing punches,” McWater said.

Teofimo, too, entered the ring in Vegas at less than one hundred percent, McWater noted. “He had PT and treatment for an injured wrist as late as the day of the fight and an injured ankle and shoulder in camp.” In an interview with Iole that posted late Tuesday, Lopez said that he came in to the fight with injuries too, and it feels like Loma is now looking for excuses. (Photos by Mikey Williams/Top Rank)

And here is something the fighters themselves and deeper insiders know to be true. “Every fighter comes in after a tough camp with some injuries,” said McWater, who runs Split-T management.

The surgeon said in the Yahoo story that about six weeks before the lightweight showdown, he determined Loma had a bruised rotator cuff and some of his cartilage was chipped, but he was okayed to train.The surgery found that Loma was dealing with “bursitis,” the doctor told Iole. He also told the writer that Loma received an injection before the fight, interestingly.

It brought to mind the after-the-fight-fallout boxing fans took in when Manny Pacquiao got handled with ease by Floyd Mayweather, in 2015. Right after the fight, Manny announced that he’d come to the ring with a bum shoulder, and he too got surgery from ElAttrache.

Monday probably had Loma recalling a similar hurdle; on May 12, 2018, Loma fought Jorge Linares, and the veteran of more than 400 amateur fights said he hurt his shoulder in round two. He had surgery May 30 after that victory, and put out photos of himself in a hospital bed, to help paint a picture. Against Linares, Lomachenko was able to gut it out, and he scored a stoppage on Linares, in round ten.

Older people know, coming down with various strains and sprains can accompany the aging process; Loma turns 33 in February, but the doctor said the fighter, promoted by Top Rank, same as Teofimo, should heal and be as good as can be after rehab.

You may have had a mini flashback when you learned of the latest Loma surgery. Pacquiao went into the May 2, 2015 Mayweather fight with a damaged right shoulder, and he didn’t give even a hint of it to the public. He did ask the Nevada State Athletic Commission if he could take an anti-inflammatory shot before colliding with Floyd, but the commission said no. ElAttrache diagnosed Pacquiao with a “significant tear” in his rotator cuff after the May 6 surgery on the Filipino legend.

Who knows what direction the young gun will go in, stay at 135, head to 140, challenge Conor McGregor to a bout, maybe?….but it sure looks and feels like this rivalry, with him and Loma, will keep simmering as that gets sorted.

—-Touch base with Woods via LinkedIn, if you like.

The post So word is Lomachenko came in to the Lopez fight with a bad shoulder appeared first on The Ring.