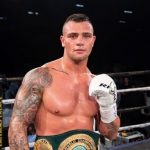 By day, Kevin Lerena is a talented boxer with aspirations of becoming a world champion. By night, the proud South African is a qualified paramedic.

Lerena, who is ranked No. 5 by The Ring at cruiserweight, has worked as an AEA (ambulance emergency assistant) helping trauma victims in and around Johannesburg, South Africa, for the past four years, as well as working his way up the 200-pound rankings.

“I really enjoy it, it’s something I’m really passionate about and it’s a good way to give back to the community,” Lerena told The Ring. “I went to college and studied and got a qualification.

“When I have some spare time, I’ll do it. It’s very ad hoc. The shift systems are different. You can work in the mornings, in the evening. I do it between fights. I don’t really say it’s a job. It’s something that I do that makes me happy.” South Africa has been on lockdown since March 26, but Lerena (25-1, 12 knockouts) has maintained a busy schedule.

“I have worked through the whole pandemic,” said the 28-year-old southpaw. “There’s COVID-19 cases in Africa, but there’s less trauma because of the lockdown and curfew. There’s been moments of it being very quiet and then very busy.

“We’ve been in lockdown a very long time. It’s definitely affected the economy and a lot of people’s daily lives. I haven’t had anyone close to me directly affected, but the country itself is in a lot of trouble.”

Rodney Berman of Golden Gloves has nurtured Lerena since turning him professional in November 2011. Berman is happy with how the current jewel of his stable is developing and expects big things in 2021.

“We’re sitting patiently waiting for our chance with the sanctioning bodies but we’ve got to wait until the lockdown ends,” said the veteran promoter. “A big fight looms for him next year.

“The (Kai Robin) Havnaa fight is definite, which I’m hoping will be before the end of the year. That will be his next fight.

“My ambition is, and I’m sticking my neck out, but I don’t think (Aleksandr) Usyk is going to make it in the heavyweight division. I don’t doubt his fighting ability, it’s just that size matters. He might beat the more average heavyweights, but when it comes to the Tyson Furys, at that level, I think he’s just too small. I’m hoping he’s going to go back to cruiserweight. Our aim is hopefully an Usyk fight at some stage.”

The post South African cruiserweight Kevin Lerena’s other passion is about saving lives appeared first on The Ring.