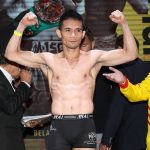 Earlier today, Team Sor Rungvisai reached out to our contributor Anson Wainwright and offered an open letter to the reigning Ring Magazine 115-pound champion and WBC titleholder, Juan Francisco Estrada. The letter has been presented verbatim.

I have heard people saying that Juan Francisco Estrada still wants to fight Roman “Chocolatito” Gonzalez next and it is extremely frustrating for me.

I have been following all the rules and orders very closely throughout my career. I know I cannot do whatever I want  because I must play by the rules. Just like inside the ring, we must do the right thing outside the ring too.

Estrada has been the world champion for almost two years now, and he has not done any mandatory defenses until now. Zero!

It is now time for him to do it!

I have been the mandatory challenger for this title for over a year now. It has been ordered for a long time by the WBC’s Board of Governors that Estrada could have one more voluntary defense, which he had against Carlos Cuadras, then he had to fight me for his mandatory defense.

If Estrada and “Chocolatito” wanted to fight each other so much, they could have just done it in their last fight, but they chose not to. Now it is my right and my turn to fight for the title. I won’t understand if they want to dodge the rules. It is not fair and not respectful for me and the Thai people who support me.

One thing the fans might not be aware of is that the WBC has ordered this mandatory fight for me a long time ago. They did not just order it after the Estrada vs. Cuadras fight. It has been there all along, and Estrada and his team knew it. I truly respect the WBC for doing the right thing by ordering this mandatory. It is such an honorable action to stand behind those who earned the spot. I have to thank the WBC and the President Mauricio Sulaiman so much for being so accountable and honorable.

I have given both Chocolatito and Estrada the opportunities at my title whenever it was ordered for me to do so. I expect them to do the same thing for me. I respect both Estrada and Chocolatito as great fighters in the ring.

However, they need to do the right thing outside the ring to earn the full respect. To have Estrada vs Chocolatito next is not right. It is not fair! I know Estrada is a great human being, and I trust that he will do the right thing. Chocolatito as well, he can wait now and his turn will come.

I guarantee all the fans around the world that my third fight with Estrada will be a war. If they want a war, I will give them a war. Then, if I win and “Chocolatito” wants to fight me, let’s do it!

If Estrada wants to fight “Chocolatito” so much, he should vacate his WBC title. I have earned my spot. I have the right to fight for the WBC world title next. If he does not want to follow the rules, just vacate the title. I will get back my WBC world title, and either or both of them can fight me later if they want.

I hope DAZN and Matchroom hear me, too. I can guarantee them the best and most incredible fight possible. All-out war from me. The fans will love it. Unless Estrada runs for the whole fight, I will give you a Fight of the Year candidate. It will be great for the fans.

I hope all the fans who believe in the right thing will stand behind me and support me. I am just trying to ask for what I have earned. I have been waiting patiently for over a year, and it is now my time. I don’t want to wait anymore. I am ready for the world title fight now, and I cannot wait to show the world my power again.

The post Srisaket Sor Rungvisai unwilling to wait on Juan Francisco Estrada: Fight me or vacate your title appeared first on The Ring.