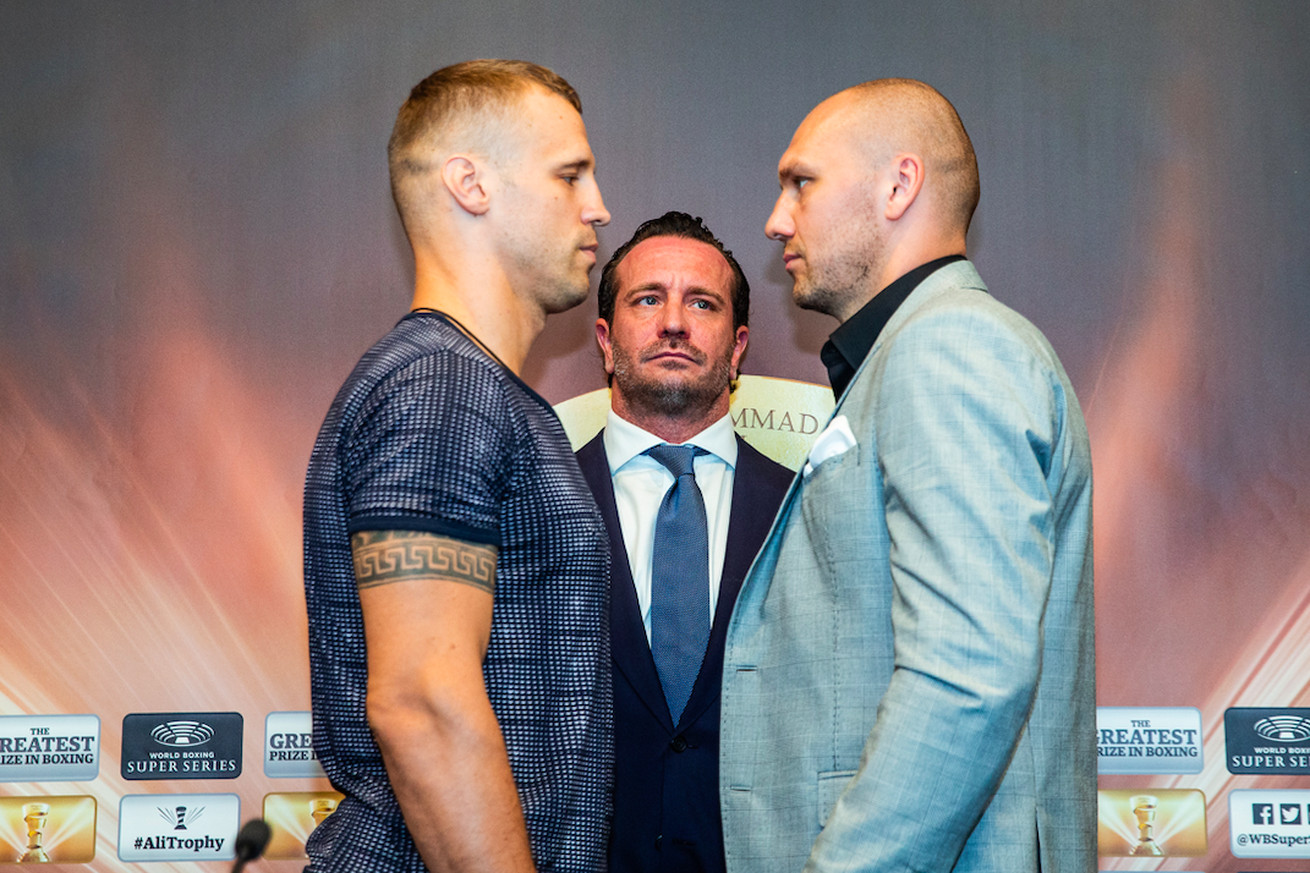 The World Boxing Super Series is back on Saturday.

This Saturday on DAZN from Riga, Latvia, the World Boxing Super Series is back with a pair of cruiserweight semifinal bouts, featuring Mairis Briedis vs Krzysztof Glowacki for a pair of world titles, and Yunier Dorticos vs Andrew Tabiti.

Our staff make their picks.

So probably as a scout I know fuck all, is my point. I mean, once, back in around 2006 I — oh God, listen, it was a long time ago, I was young and enthusiastic about being contrarian — I thought Siarhei Liakhovich was better than Wladimir Klitschko. Look, man, Wlad’s chin was still very suspect, he’d been beaten by Lamon Brewster two years earlier, and barely survived Samuel Peter in 2005. IT WAS A DIFFERENT TIME.

I’m picking Dorticos here, as I think his power will see him through, but I will be only lightly surprised if I’m dead ass wrong and Tabiti pops-and-grabs his way to a decision win. Tabiti has the right ingredients to be the sort of guy I continually underrate like a dumbass. Dorticos TKO-10

In my estimation this fight could become the best of the bunch this weekend. Tabiti has some promise, but I just don’t think he’s faced anyone the quality of Dorticos yet. That in and of itself will present some challenge, but I think Tabiti has the better hand speed and will be coming in with a point to prove. And because Dorticos has a tendency to put the earmuffs of for defense, I think Tabiti will get more than a few chances to detonate on him. There are also plenty of good reasons to like Dorticos in this fight — with experience probably the biggest factor favoring him — but every fighter’s got to mature at some at some point, and I’m going with Tabiti to pull off the minor upset. Tabiti SD-12

I respect Andrew Tabiti’s abilities, even if the clinch is every bit as integral to his offense as the jab, but there’s just not a lot going his way here. He’s giving up three inches of height and 3.5 inches of reach to a far scarier puncher, one who’s made his style work against far stronger opposition than Tabiti has. Unless Dorticos’ wars all catch up to him at once, Tabiti will struggle to stay out of the line of fire while implementing his preferred punch-and-clutch gameplan.

Tabiti needs favorable refereeing and a willingness to make the fight unwatchably ugly to win this. There’s only so long you can stay in the phone booth against Dorticos, though. I can see Tabiti frustrating the Cuban for a few rounds before trying one too many infighting flurries and getting lamped. Dorticos TKO-5

From what I have seen of Tabiti, he’s got enough to go all the way in the World Boxing Super Series. Slick, stylish, flicking the jab from the hip in a relaxed fashion, the unbeaten 29-year-old may be peaking at the perfect time. Dorticos isn’t your typical Cuban; this could play into the hands of the bookie’s underdog. “The KO Doctor” lives up to his name: a headhunting slugger than has ferocious power. Dorticos was doing well in his semi-final in Season 1 until Briedis cleaned him out in the 12th. I’m expecting similar heartbreak for the Cuban, as Tabiti launches his name worldwide at 200 pounds. Tabiti UD-12

In a sense, I feel like I should be sure Briedis will win. He’s at home, he’s a rugged sort, and he gave Oleksandr Usyk by far the toughest test of Usyk’s career when they fought in Riga back in Jan. 2018. Hell, I had that fight even. Briedis was a major problem for Usyk.

But in his two fights since then, Briedis really hasn’t been very impressive. He won wide scores over Brandon Deslaurier last July in Moscow, but his performance felt really flat. And in November, Noel Mikaelian gave Briedis more than he could handle, only for Briedis to get highly suspect scores in his favor.

Glowacki is a good fighter, his only loss also to Usyk back in 2016. He’s got wins over Marco Huck (a dramatic rally knockout in the 11th round of a terrific fight in 2015) and Steve Cunningham. He’s a southpaw, he can bang a little, and he looked fine beating Maksim Vlasov in November on the same card where Briedis probably should’ve lost to Mikaelian. But it’s a whole different matchup, and maybe Briedis will feel like himself in this one. Home field could help, but I’m going with the upset. There’s just something about Briedis’ last two outings I do not like at all, I think we’ve seen his peak. Glowacki SD-12

To be honest, I think this is a fight Briedis should probably win on paper, which is not to take much away too from Glowacki. In fact, if anything, I should probably be taking a bit away from Briedis as I thought Noel Mikaelian clearly beat him last November in the quarterfinal round. That decision somehow went to Briedis, though, so he moves on to this semifinal match. Actually, just thinking back on the Briedis-Mikaelian fight, I just talked myself into picking Glowacki purely based on the fact that I don’t think Briedis even deserves to be here…

Too bad this fight is in Briedis’ hometown of Riga, Latvia, though, where he’ll surely benefit from the scorecards if Glowacki can’t knock him out. Briedis UD-12

Outside of Usyk, who’s just unreasonably good, Glowacki’s greatest struggle came against Marco Huck, a master of what I like to think of as “bastard fighting.” Tricky bastard, dirty bastard, however you want to spin it, Huck at his best could turn any fight into a dirty, razor-close slog. Briedis may be known for his power and proved against Usyk that he can put on a great fight even without getting the finish, but he possesses a similar talent that I believe will be his key to victory.

The knockout possibility is there for Briedis, of course; Glowacki’s hit the deck before. Ideally, we’ll get another highly entertaining back-and-forth at range, where I slightly favor Briedis. If things go south, though, Briedis has his bastardry to fall back on, and as the hometown fighter, a clinch-heavy, difficult-to-judge fight seems likely to turn out in his favor as well. No clue how fun it’ll be, but Briedis makes it to the finals. Briedis UD-12

I love this fight. The World Boxing Super Series continues to deliver the goods, with a semi-final which could easily end up in a war. Briedis is going to have to improve on his quarter-final win over Gevor; the Latvian slept walked through to a points win without displaying the arsenal we are used to seeing. Glowacki is a dangerous customer in the division but should struggle to pin down a close-to-his-best Briedis. “Glowka” loads up that left hand far too often looking for a one-punch beheading, but Briedis will be able to punish the Pole when he falls in. Briedis UD-12

Bad Left Hook will have live coverage of Briedis vs Glowacki and Dorticos vs Tabiti on Saturday, June 15, starting at 2 pm ET on DAZN

One thought on “Staff picks: Briedis vs Glowacki | Dorticos vs Tabiti”