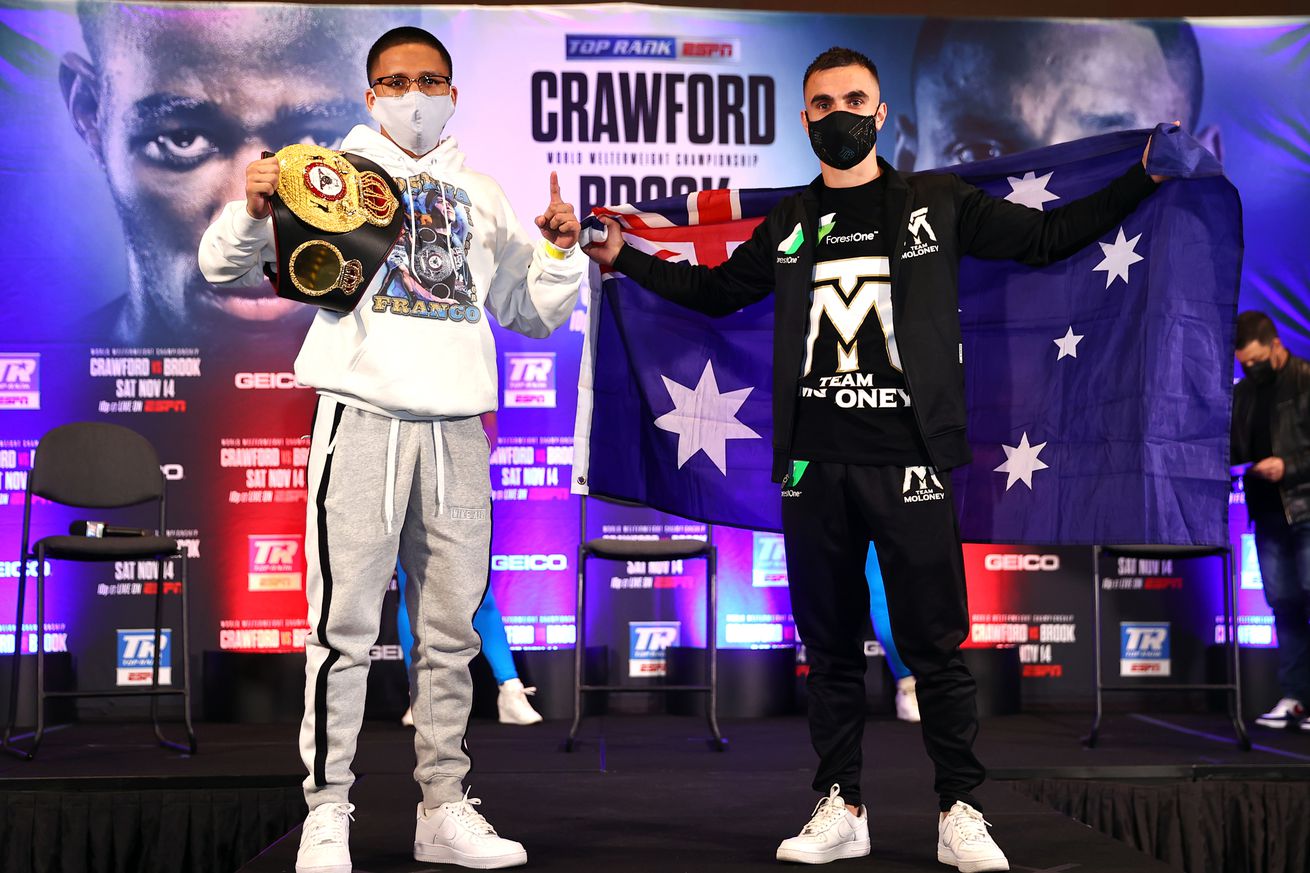 Will Joshua Franco take down Andrew Moloney again, or can the Aussie get some revenge?

This Saturday on ESPN (Nov. 14, 10 pm ET), we’ve got a nice co-feature for the Crawford-Brook main event from Las Vegas, as Joshua Franco and Andrew Moloney glove up for a rematch from a very good fight in June, where Franco scored a solid upset to claim a secondary WBA belt at 115 pounds.

Last time, I was the only one to pick Franco. Moloney’s effort in the first fight wasn’t unusual for him, he was just beaten by a guy who fought better and took advantages of some of his flaws. We’d seen similar things in Moloney’s previous fight with Elton Dharry. Dharry had Moloney hurt and in a bad spot, despite Moloney getting the stoppage and being up comfortably on the cards. Franco and his team did better than Dharry did, but not with an abnormal attack or anything, not doing anything we hadn’t seen Moloney struggle with a bit before.

Moloney’s approach has been largely successful, and he’s a good fighter, but unless he’s made some legitimate changes, he’s going to have problems again. But he also did some good work in the first half of the first fight before Franco took over. I’m going with Moloney to take this one; the judges wanted to give him the first fight, I think, not out of a sense of bias but favoring his style, and if he can avoid being really beaten up this time, he might edge a close, controversial decision. But there’s every chance Franco just has his number, too. Moloney MD-12

I guess I sort of underestimated how much trainer Robert Garcia could benefit a fighter like Joshua Franco, but it certainly showed in his last meeting with Andrew Moloney. Moloney says he wasn’t firing on all cylinders in the first fight and is confident he’ll be able to right some of those wrongs in order to turn the tide against Franco, but I think this could be a style problem for Moloney.

Moloney likes to fight at his own pace but I think Franco is going to push him again and make it difficult for Moloney to maintain his form over the duration, which proved to be an issue the first time around. I think Franco starts coming on in the second half of the fight once again and does enough to take another tough but clear decision over Moloney. Franco UD-12

The thing about Franco-Moloney 1 is that it was an entirely typical Moloney effort. He marched forward behind his jab, looked for combinations in the pocket, and targeted the body with delightful fervor. It just didn’t work this time; Franco figured out the timing on his entries, overpowered him in the close-range firefights Moloney prefers, and ultimately cowed him in the final rounds. Moloney executed about as well as he possibly could and it wasn’t enough.

It would take a seismic shift in Moloney’s gameplan to make this immediate rematch a good idea, and between the limited amount of time he’s had to make those adjustments and the fact that the Elton Dharry war didn’t produce similar improvement, this stays right in the “mistake” pile. Now that Franco knows Moloney can’t hurt him, expect an even more one-sided effort with the potential for a late stoppage. Franco UD-12

I was surprised how big and strong Franco was at the weight in the original bout between these two in the summer. Moloney was solid in the opening rounds putting together some beautiful flurries, looking at his best coming forward as a pressure fighter. The thing is, it all got a bit predictable from the champion and Franco was able to counter with really impressive volume, scoring a knockdown late in the fight. Moloney has admitted he struggled with perforated eardrums during the fight and if he can get behind his jab more return to his amateur schooling he should fair better over the distance. Moloney is terrific on the inside, but so is Franco – he’d be wise to stay out of the pocket in which the fight becomes a coin toss. I fancy Moloney to fight smarter and take this on the cards. Moloney UD-12