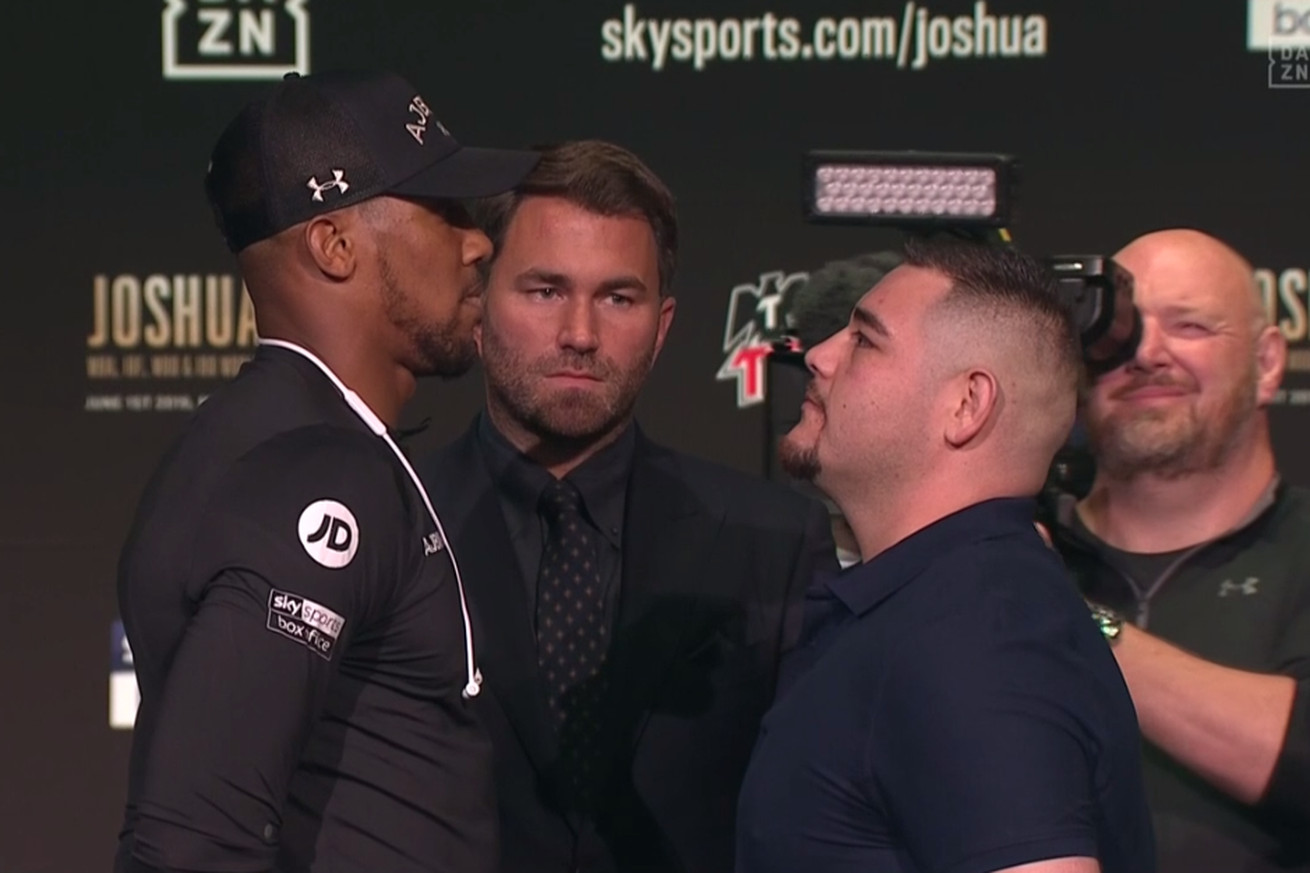 We’ve got three world title fights coming your way Saturday night on DAZN, led by Anthony Joshua vs Andy Ruiz Jr for Joshua’s WBA, IBF, and WBO heavyweight titles. Our staff make their picks for that one, plus Smith-N’Dam and Taylor-Persoon.

Also, as an aside, I looked at one of Persoon’s recent opponents and found out that said opponent is in the middle of a 1-11 slump yet still ranked No. 5 in the division by BoxRec. Weird. Taylor UD-10

A year ago, this wasn’t the #RoadToUndisputed fight we were probably expecting to land in New York this weekend. What the heavyweights have failed to do, Katie Taylor is on the verge of managing: sweeping the lightweight division of it’s four recognised belts. Persoon — part-time boxer, part-time police officer — hasn’t lost in nine years, but also hasn’t ventured away from Belgium small halls having taken up the sport 12 years ago. Granted, I haven’t spent days trawling through Persoon’s pro career, but Katie Taylor’s style looks enough to overwhelm any contender under 135-pounds. Fast hands, fast attacks and a relentless work rate have allowed Taylor to glide to the top of the tree in just 13 pro fights; Persoon’s admission to Taylor having that edge in speed doesn’t bode well for the challenger who has modest 41% KO record. Taylor has the ability to wear Persoon down over 10 gruelling rounds of constant pressure. Taylor UD-10

While Andy Ruiz Jr has decided to act like this is his first and long overdue chance to become the first Mexican heavyweight champion, thank you so much Al Haymon and the PBC, it’s not. Ruiz got a shot to become the first Mexican heavyweight champion back in 2016, when Top Rank got him into a fight with Joseph Parker for the vacant WBO belt. Parker edged a majority decision in New Zealand to win the belt. I had it 114-114, for whatever that’s worth. I’m just saying, he’s had the chance before, but you’d never know it listening to him the last few weeks.

Anyway, I like Andy Ruiz Jr. I think he’s a good fighter. I don’t give a tuppenny fuck that he’s fat, I’m not looking for boxers to be trying to sell blue jeans. Ruiz can fight. Fast hands, decent power, solid skills. But he’s going to lose to Anthony Joshua. Height and reach-wise, Ruiz is about exactly the same as Alexander Povetkin. Povetkin was a very good amateur who never quite got over the the last hump as a pro because it’s the era of the giant heavyweights. The Klitschkos have given way to Fury, Joshua, and Wilder, three giants with very different body types. I honestly think Ruiz will do a little bit better than the super doubters expect, but he’s not going to come close to winning. Joshua TKO-8

I’m not going to overthink this one. Anthony Joshua is a huge star over in the UK and is looking to crash the gates in the US market, while Andy Ruiz steps in as a late replacement for Jarrell Miller. Ruiz was essentially hand-picked by Joshua’s promoter Eddie Hearn, and whatever you make think of Hearn, he’s no idiot. So despite how much he talks-up Ruiz as a “dangerous opponent,” he certainly wouldn’t throw his cash cow in with a fighter he honestly believes could upset him in a short-notice matchup — particularly with a mega-fight against Deontay Wilder still looming somewhere in the background. Andy Ruiz will come to fight but he’s overmatched in the talent department, which is exactly what Joshua needs to look good in this showcase outing. I’ve got Joshua stopping him early. Joshua TKO-4

I don’t think this will be quite as viscerally entertaining as Joshua-Miller would have been, but it’s definitely more interesting from a stylistic standpoint. I’d like to see more of Joshua’s infighting outside of his killer uppercut, and provided we don’t get the referee from the Joseph Parker fight, whom I believe had a deep-seated phobia of male intimacy due to toxic masculinity and/or a strained relationship with his father, we should see at least some of that against the squat Ruiz.

Possibly not all that much, though. Ruiz has an 8” reach disparity to deal with, and though he boasts fast hands, I’m not sure the rest of him is sufficiently agile to weave his way inside without taking heavy fire. I expect a few fun rounds before Joshua catches Ruiz coming in and plants a seed of doubt that neuters Ruiz’s willingness to put himself at risk, leaving Joshua to rack up the rounds at range. Joshua UD-12

Joshua will be looking to make a statement in his first outing on American soil this weekend; Ruiz looks like the perfect opponent — albeit at late notice — to do so against. The fast hands of the Mexican have focused the narrative of a “potential slip up” for AJ, but without that concussive one-punch power, Ruiz will find himself working overtime in trying to land attacks on the champion. He’s likely to fall short and fall in on occasions, leading to a Joshua onslaught. For all his faults, AJ is one of the most clinical finishers in the game — he’ll smell blood within the first three rounds. Joshua should be able to back up Ruiz fairly easily, with the stoppage coming after a barrage on the ropes. Joshua TKO-3

Bad Left Hook will have live coverage for Joshua vs Ruiz on Saturday, June 1, live at 5:30 pm ET streaming on DAZN