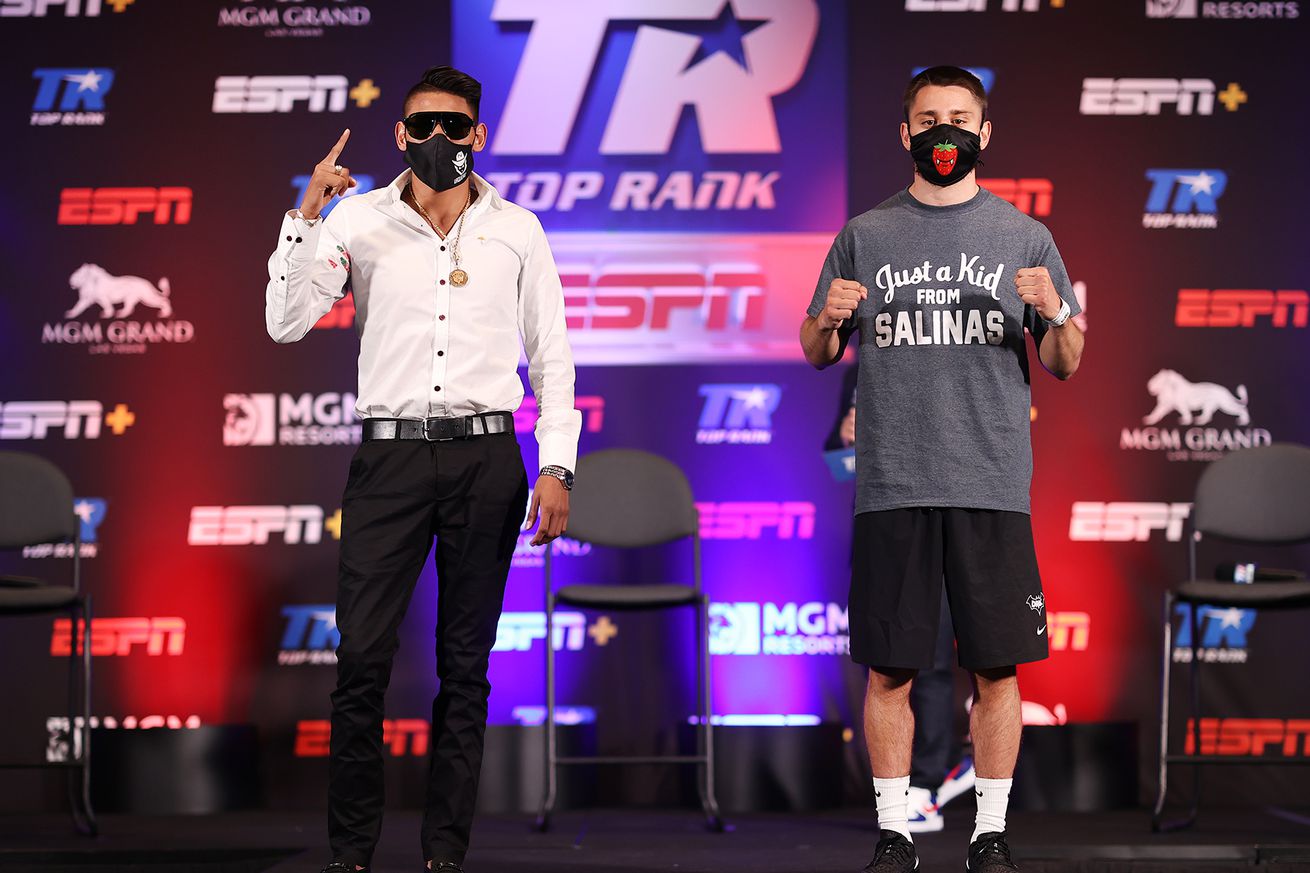 Will Emanuel Navarrete become a two-weight champ, or does Ruben Villa break through?

Friday night on ESPN (10 pm ET, prelims on ESPN+ at 7:30 pm ET), Emanuel Navarrete and Ruben Villa meet in a 12-round Top Rank Boxing main event for the vacant WBO featherweight title, with Navarrete coming up from 122 pounds and looking to become a two-weight titleholder, while Villa aims to break through after some impressive performances on ShoBox in particular.

It’s a style clash of a pressure fighter against a southpaw technician. Will Villa trip up one of Top Rank’s rising stars, or will “Vaquero” continue his run in a new weight class?

I’ve liked this matchup since it got made, and I’m glad Villa is getting the shot to graduate from the ShoBox level. He’s a really good boxer, has some slickness, some skills, puts shots together OK, but in all honesty I’m having a really hard time seeing him getting the duke here.

Navarrete’s style and approach can definitely be out-boxed, and Villa has better skills than anyone Navarrete has fought since Isaac Dogboe, and also isn’t 5’2” like Dogboe. That said, Navarrete is still a bigger guy in the dimensions, and I don’t expect him to look small moving up from 122, where he often looked huge in the ring, but even at the presser you can see that Villa’s much closer in natural size to Navarrete than a lot of guys have been, even looks a bit thicker.

I think Villa will win some rounds and make this a little more interesting than Navarrete’s recent fights have been, but I see Navarrete doing the more eye-catching work, probably will be busier, and his pressure could get to Villa late. I think it’s going the distance, but there won’t be controversy, something like a solid 8-4 win for Navarrete. Navarrete UD-12

Emanuel Navarrete has been about as active a champion as you’ll come across, and while that’s something I’d usually never complain about he hasn’t exactly been in against the stiffest of competition. This outing is certainly a step up from some of his previous opponents of late, and that makes this matchup much more intriguing, but I think Navarrete is still brimming with confidence from the tear he’s been on.

So while Ruben Villa is a good fighter himself, I think his dimensions won’t give him the sort of edge he’d hope for in this type of fight, and considering he’s not much of a knockout puncher this fight will likely be going to the cards. I see Navarette and Villa having a pretty fun fight to watch but one in which Navarette is busy enough to rack up more points on the scorecards, taking the fight over the distance. Navarette UD-12

How to Watch Navarrete vs Villa

It’s always interesting when both fighters are entering uncharted territory. Navarrete hasn’t faced a real challenge since Isaac Dogboe, who presented an immensely favorable physical and stylistic matchup. By the same token, for all of his amateur success, Villa’s best professional win came over Luis Alberto Lopez. Navarrete’s never had to deal with a primo technician and Villa has never had to deal with a relentless, top-shelf slugger.

This may be the “unga bunga” part of me that loves watching bruisers beat down boxers talking, but I favor “Vaquero.” His 5.5” reach advantage, motor, power, and offbeat punching angles all look like problems for Villa, who lacks the stopping power to get Navarrete’s respect or blunt his offense. As praiseworthy as Villa’s movement and rock-solid fundamentals are, I just don’t see him surviving the tornado of offense Navarrete brings to the table. Unless those extra four pounds prove game-changing, Navarrete snowballs to a late stoppage. Navarrete TKO-10

Navarrete has been going along like a steam train the last couple of years, clearing everything and everyone in his path. He’s a real throwback fighter, willing to take two to land three and often overwhelms an opponent with his output and ferocity. RV4 was a terrific amateur splitting wins against Shakur Stevenson and has looked the real deal as a pro. He’s got a stinging jab, great feet and is patient from the southpaw stance with real defensive attributes that could cause Navarrete problems from the opening bell. He’s better acclimatised to this weight class and I’ve just got a feeling that his ceiling is higher than Navarrete’s. I’ve really enjoyed “Vaquero” over the last couple of years, but have a nagging suspicion that he may become unstuck this weekend. I think Villa’s control of the distance will negate a lot of the pressure Navarrete will try to impose, with his power stifled. Villa UD-12