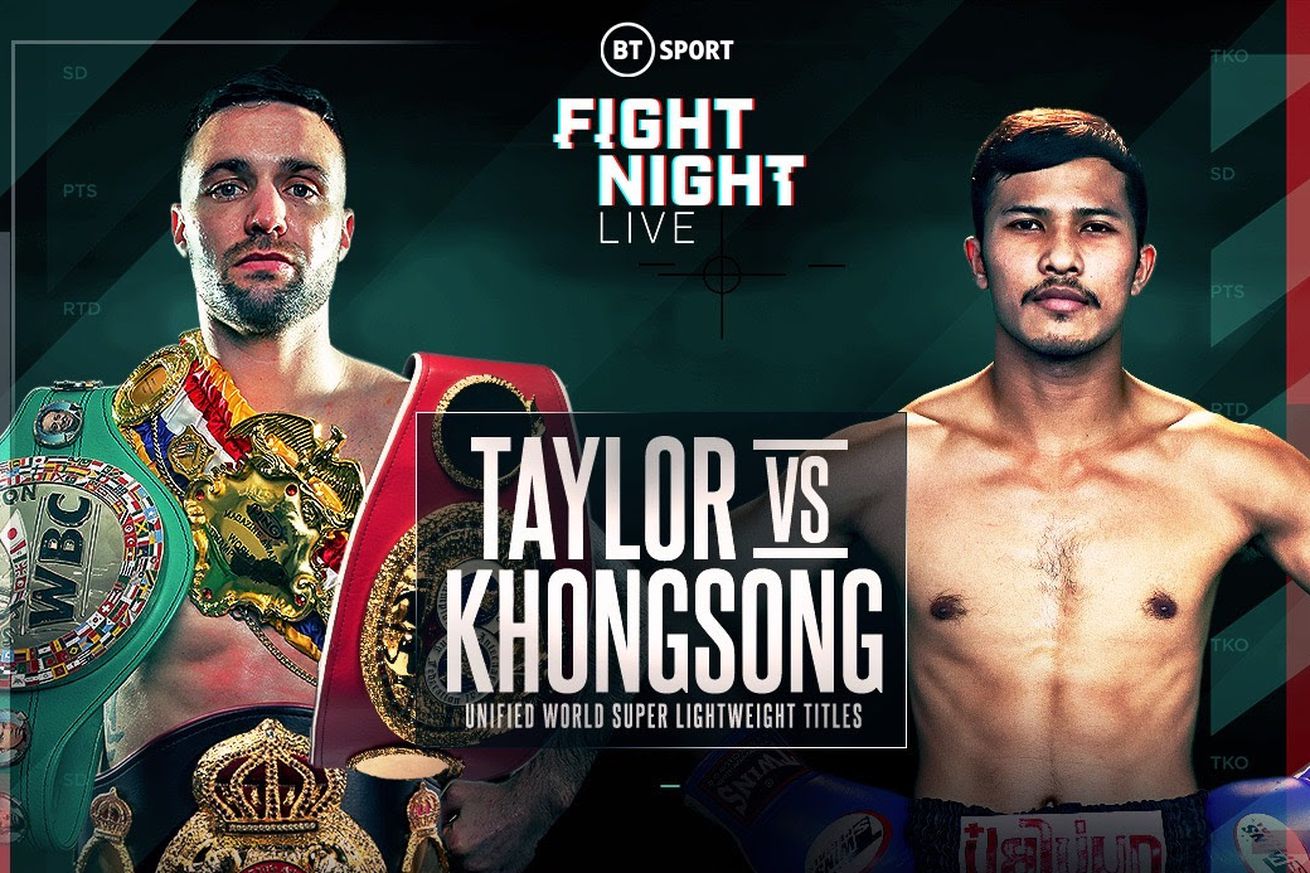 Will Josh Taylor roll on, or can Apinun Khongsong provide some magic?

Unified 140-pound titleholder Josh Taylor is set to return on Saturday (ESPN+, 2 pm ET), defending his WBA and IBF belts against a mandatory challenger, Thailand’s Apinun Khongsong, who will be taking an enormous step up in competition.

Can the Thai fighter shock the world, or will Taylor roll on toward an undisputed meeting with Jose Ramirez?

Our staffers pick the fight.

sometimes when I do. Not this time, though. In the minimal footage of Khongsong that’s available, there’s nothing there that beats Josh Taylor. Yes, he can punch, so yes he has a puncher’s chance, but a punch alone is not going to beat Josh Taylor. Period. Taylor takes him apart and the referee or corner mercy stop this before it gets any uglier. Taylor TKO-6

Let’s just be honest here, I’ve been high on Josh Taylor for awhile, maybe since Ohara Davies. I’ve been singing his praises and have had him on my shortlist of fighters whom I deem ‘legit.’ I even picked him over Regis Prograis, who is another fighter I really like. Khongsong, unfortunately, I’m not so high on. I mean, yeah, he’s tough and whatnot but I don’t think his skills match up. And when you get to a level where a fighter is just as tough as you, but just better, it’s usually pretty tough sledding.

I think Taylor puts on a bit of a show here, where he can showcase both his boxing ability and fighting ability after he starts breaking Khongsong down. Eventually I think that’ll lead to a stoppage win for Taylor, setting up an undisputed title unification against Jose Ramirez. So all in all, not really a tough pick for me. Taylor TKO-8

How to Watch Taylor vs Khongsong

Apinun Khongsong has had one relevant fight so far in his career, a 2019 knockout of Akihiro Kondo, and his performance there doesn’t exactly inspire hope of a monumental upset. Though he showed his power by poleaxing the durable veteran with an uppercut, he ate practically every jab that came his way beforehand and a decent number of the follow-up right hands. Taylor should have no trouble finding a home for his straight left or any other punch, and between “The Tartan Tornado’s” durability and stopping power, Khongsong will break before he does.

If sheer power were enough to stop Taylor, he wouldn’t have survived half an hour with Regis Prograis. I fully expect Khongsong to fight his heart out, but he’s outgunned pretty much everywhere. Taylor breaks him down in a fast-paced battle for a middle-round mercy stoppage. Taylor TKO-5

Josh Taylor has a legitimate argument for a place in the sport’s top ten pound-for-pound. His FOTY candidate against Prograis last year underlined his tenacity, bravery and incredible skill level at such a high output against a top operator. Khongsong is merely a slight detour en route to the undisputed bout with Ramirez, but it’s one that the Scot can’t afford to take lightly.

Khongsong looks like a legitimate puncher, and with the “Tartan Tornado” enjoying the fruits of success over the last year outside the ring it’s a concern whether we’ll see a 100% Taylor on Saturday. But what percentage does Taylor realistically need to be at to get through this mandatory? I can see a Fury-Wallin-esque scare in this one. Not specifically with a cut, but with the champion needing to dig deeper than expected. Taylor is big and strong at 140 pounds and could get the challenger out of there late. Taylor TKO-9