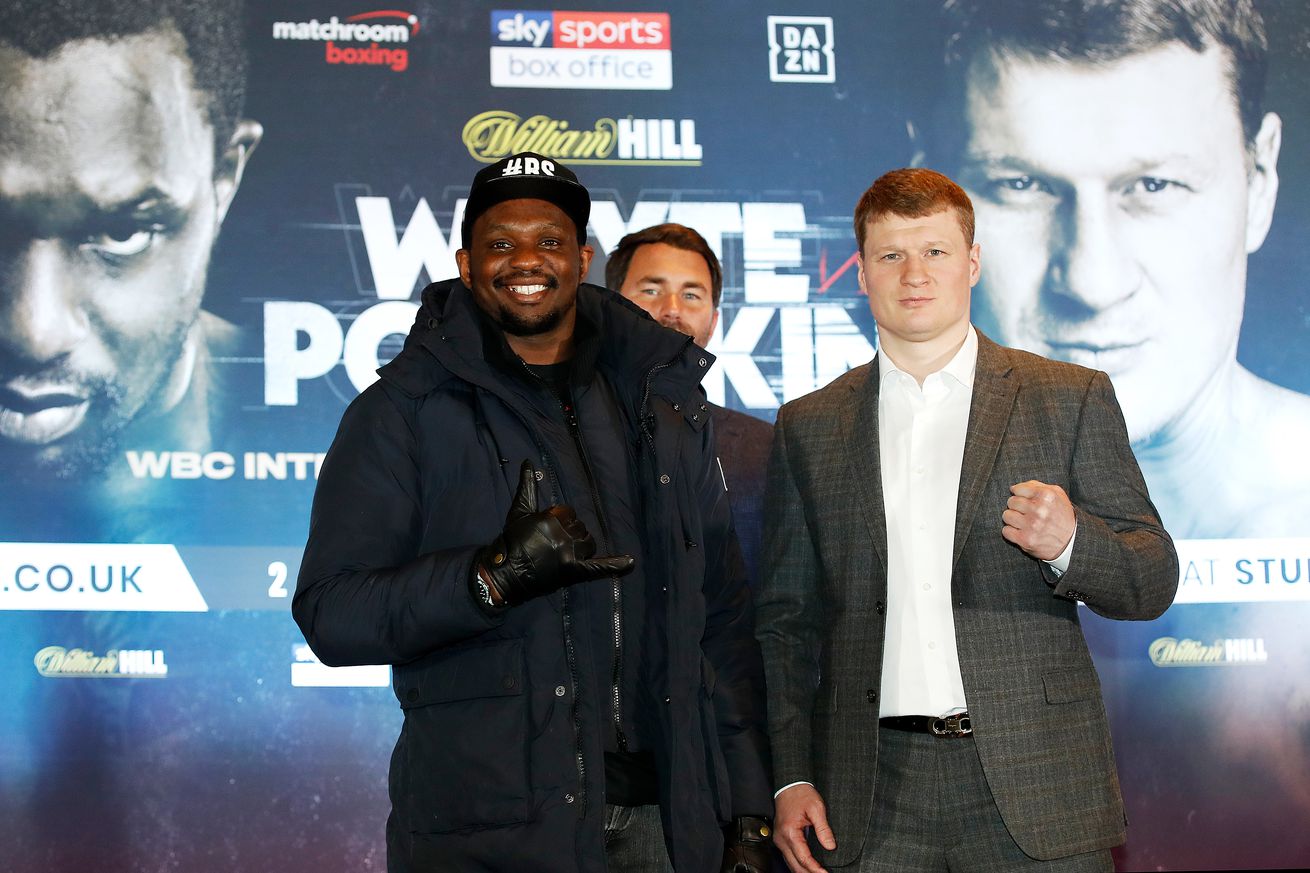 Saturday on DAZN (2 pm ET), we’ve got a major league heavyweight main event from Matchroom’s garden, as the Fight Camp series concludes (for now) with Dillian Whyte putting his WBC mandatory challenger status on the line against veteran Alexander Povetkin.

Will Whyte keep his place in line, or can the 40-year-old Russian throw himself into the title picture? Our staffers pick the winner.

I’ll give Whyte credit that he hasn’t just sat on a mandatory or No. 1 ranking (the two are not the same thing, but I’m trying to keep it brief here) by either not fighting or fighting a series of no-hopers. He’s taken some risks against Joseph Parker, Derek Chisora, and Oscar Rivas, and now he’s doing it again with Povetkin, who is aging but can still fight.

Povetkin is past his best days and he was no superstar even in those best days, but he’s still dangerous, because he’s technically sound and a smart fighter with a good left hook. But his fight with Michael Hunter last year, which went to a draw, worries me about his chances in this one. Hunter’s a small heavyweight, which Povetkin is, too. Whyte’s not one of the giants, but he’s a big, hard-hitting, legit heavyweight. That said, I don’t know that he has the speed to connect on Povetkin the way Hunter did, either.

I’m throwing a shot in the dark here and taking the upset. There’s something to the story of Dillian Whyte waiting 1,000+ days (by his estimation, which isn’t really accurate) as mandatory challenger only to be knocked off when he’s right on the doorstep finally, with a guarantee in place. Boxing is cruel. I’m also somewhat concerned about Whyte’s conditioning and preparation here, he looks in pretty good shape visually, but going 12 hard could be a tough ask. I have no way of knowing for sure about that, of course, but that’s the fun of making a pick. Povetkin TKO-11

Dillian Whyte is presumably risking a lot here by taking this tough fight against Povetkin while he’s due a mandatory WBC title shot. For as much as Whyte has complained about the length of time he’s had to wait to get that title shot, he’s clearly not just taking another tune-up before he can cash in. But the thing here for me in this fight is the age factor.

Povetkin has some skills and can thump a bit, but he’s 40 years old and was far from spectacular the last time we saw him in the ring against Michael Hunter. Really, I just think the difference maker will be that Povektin is too long in the tooth at this point and while he might be dangerous for the first few rounds, I think Whyte starts to take over and get a good handle on the fight later. I’m going to take Whyte to win a clear decision. Whyte UD-12

Alexander Povetkin is 40 years old and still puts together slicker combinations than most of his contemporaries. He’s definitely got the edge in crispness against “The Body Snatcher,” but there’s a worrying amount going the Brit’s way; Whyte is younger, taller, rangier, 20-30 pounds heavier, and potentially boasts the heavier hands. At this stage in his career, fighting in hostile territory against a man who tends to sway judges in close bouts, I’m not sure Povetkin’s slickness is enough to close the gap.

As flawed as Whyte still is, he utilizes his size and power well enough for me to give him the edge against Povetkin, who ate some heavy blows against Michael Hunter that could have easily spelled curtains if delivered by Whyte. “Sasha” keeps it competitive and may even require a smidge of home cooking to overcome, but Whyte lands the more telling blows to claim a narrow decision. Whyte MD-12

It feels to me like there are more variables surrounding Whyte than there are Povetkin in this fight. Whyte looks in tremendous shape after his elongated camp in Portugal, but in separating from Mark Tibbs may be tempted to fight with his heart rather than his head in Brentwood. He’s traded his way out of trouble in previous high-calibre wins, but with an opponent as experienced and wiley as Sasha, a more controlled, level-headed approach is surely advisable.

Whyte’s addition of Dave Coldwell to his corner this week to combine with Xavier Miller is a curious move. Would a team unanimously confident of their chances be looking to make changes at such a late stage? Who knows.

If we see a thoughtful Whyte this Saturday he should be able to outwork Povetkin leading off his richly improved jab. If he decides to go to war, burnout may become an issue as he looks to manage this new physique.

My prediction? A combination of the two. Whyte dictates the early stages of the fight and goes for the kill late on. That’s where this one could come to life – a left hook trade-off anyone? Despite there being so much at stake for Whyte, he’s a born fighter and loves a tear up. Whyte KO-11