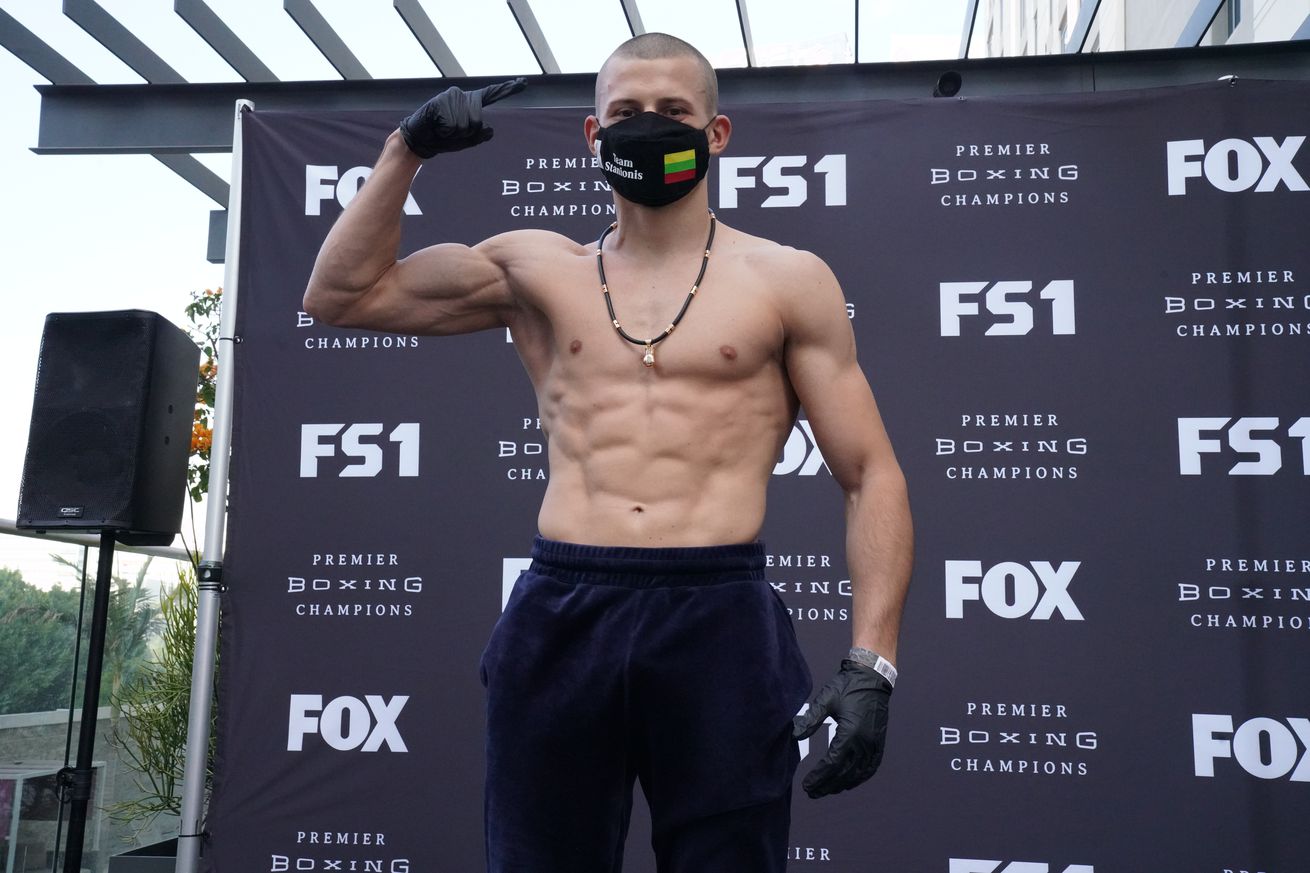 Eimantas Stanionis had too much firepower for Justin DeLoach in tonight’s PBC main event.

It was a rare weeknight fight card from PBC tonight on FS1, and welterweight prospect Eimantas Stanionis impressed with a stoppage victory over Justin DeLoach in the main event.

Stanionis (11-0, 8 KO) was without usual trainer Marvin Somodio this evening in Los Angeles, as Somodio tested positive for COVID-19 a few days back entering the PBC bubble, but the 26-year-old Lithuanian — a former Olympian — was in capable hands as Freddie Roach took Somodio’s spot in the corner.

DeLoach (19-5, 10 KO) had a pretty good start, winning the first two rounds on our card, but once Stanionis got his left hook going, he was able to tag the 26-year-old from Augusta, Ga., pretty routinely with clean, hard shots, and despite being the shorter man and giving up reach, Stanionis worked effectively off a job, mixed in a good right hand, and did good body work.

Eventually, it broke DeLoach down, as Stanionis dropped DeLoach twice in the ninth round, then finished off a fight that probably should have been stopped after the second knockdown. Official time was 2:53 of the ninth round for the TKO.

It’s a good win for experience level for sure, and this is a nice step up statement victory for Stanionis, who should probably look to move up another step from here, though he might have to settle for something of a sideways step unless his team feel he’s ready to hop in with someone like Sergey Lipinets, which could be a terrific fight and style clash, just to throw that into the world. Otherwise, I wouldn’t be surprised to see him out next against someone like John Molina Jr or Antonio DeMarco, which probably won’t excite anyone, but let’s be real, most fights that come along don’t really excite anyone.

Cruz, a 27-year-old Puerto Rican from St. Louis, now training with Ronnie Shields in Houston, had it pretty easy here. He caught Castillo (9-3, 3 KO) with a left hook right off the bat, and while he didn’t drop or, like, dominate in a hugely show-y manner, it was all Cruz (16-0-1, 10 KO) from there.

Cruz is a little old for where his career’s at, which happens, it just means he’s not some blue chip, hyped prospect. But he’s got skills, and he’s got good size and looks to have some speed and power at 140. That’s a really good division right now, but also could open up big time within the next 12 months, as guys like Josh Taylor, Jose Ramirez, and Regis Prograis figure to go up to 147 at some point, which will leave potential title vacancies and chances for a changing of the guard. Cruz will hope to be ready to join that in 12-to-18 months.

The stoppage here came because Castillo complained of feeling dizzy after a shot behind the head, which the California commission said was his own fault for turning the way he had. But however it happened, we do hope the 21-year-old Castillo is alright, and wish him well.

Flat-out, I think two of the judges got this fight dead wrong. I scored it 78-74 for Duversonne, I think you could have had a round more Booker’s way for a 77-75 Duversonne card, and I think if you worked hard you could wind up with a 76-76 even card. But Booker took two cards of 77-75 here for the split decision win, the third going to Duversonne by the same tally.

Duversonne (11-2-2, 8 KO) landed the better shots, the more telling shots, the more damaging shots, and that was the theme through the majority of the fight. Punch stat-wise, it was a very even fight, with Booker landing 132 of 411 (32%) and Duversonne landing 131 of 498 (26%), but to me it was plainly obvious whose work was the better quality. Booker did some OK body work, but Duversonne had him rocked and hurt a few times. I think the 30-year-old from Florida, who has now lost two straight, got the shaft here, and the 29-year-old Booker gets a bit of a gift.

It has to be said that Booker (16-0, 8 KO) was coming off of a major Achilles injury, hadn’t fought since May 2019 and it would have been a year off for him even without the issues 2020 has brought everyone, and wasn’t able to get much proper training in, reportedly, including a lack of good sparring. And Duversonne is long, tall, and can punch a little, which made it tough.

But Booker also just looked stiff, a little slow, had trouble defensively just in getting out of the direct line for Duversonne to work. I mean, we just saw Duversonne on Oct. 9, when he lost to Lorenzo “Truck” Simpson on a Top Rank card. He dropped Simpson but he lost that fight clearly. He’s not some out of nowhere top-level talent. Booker struggled here, and that’s just what it is. Maybe he can do better having shaken some rust here. Maybe he can’t. He’s old for a prospect and he definitely didn’t look like a serious contender this evening. You’d hate to see a guy’s window — which was small to begin with — get shut due to a combination of a terrible break injury at the exact wrong time and then a pandemic that throws the entire world off the rails, but it’s possible it could happen, too. He’ll have chances to do better, of course, not writing him off, but this was a performance that comes with concerns.