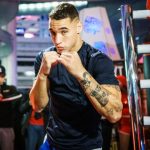 Last December, big punching middleweight Steven Butler traveled to Japan to face local superstar Ryota Murata and despite putting up a good effort, he was stopped in five rounds.

It was a valuable learning experience for the 24-year-old from Montreal.

“It wasn’t a bad performance, it just wasn’t the result we wanted,” Butler (28-2-1, 24 knockouts) told The Ring on Tuesday at the public workout. “I hit him and he hit me, it was a war. I think I won the first and second rounds, lost three and four and he stopped me in five.

“I didn’t give him an easy fight. We punched together, and after the fight I didn’t have a mark on my face – he did.”

Now the likable Canadian intends to bounce back from the loss when he faces grizzled Mexican veteran Marcos Reyes at the Montreal Casino in Montreal on Thursday.

Butler was understandably disappointed after losing to Murata and decided to change a few things.

“The first month after I lost was terrible,” Butler admitted. “But for two months, I have worked with a new trainer, Mike Moffa. I like what I learned. Now I am ready to come back and be back on top soon.

“I’m going to learn from that fight and next time I’m going to win. We need to use the experience I gained.”

After a returning from Japan he went on a family holiday to Playa Del Carmen, Mexico. That helped get the loss out of his system.

“I took time for myself,” he explained. “I came back Thursday and trained with Mike Moffa on the Friday.”

Promoter Camille Estephan felt a change of direction was necessary and Butler going with his old amateur coach was a logical fit.

“We needed someone who was going to respect the style of Steven, an offensive style, and add some defense,” explained Estephan.

“We needed to keep him motivated, we needed to make sure he’s going to be against competition that will keep him awake. Subconsciously, some guys say, ‘Yeah it’s a comeback fight.’ We didn’t want that, we wanted to really work on his boxing skills, bring back his offensive spirit and have some defense around that.

“If he gets the win and looks good we’re right back on top and looking for big fights.”

Butler intends to make a statement against Reyes in a 164-pound catchweight contest and move himself toward another world title opportunity.

“It’s a real fight,” said Butler. “He’s a good boxer, a good athlete, a good ‘B’ level fighter. For myself, I need to beat guys like that. I need to be back with the ‘A’ level guys, like Murata and every champion at 160.

“I’m going to beat him and we’re going to see where we are after that. I’m coming back and going to be world champion one day.”

Reyes turned professional in 2007. The 32-year-old Mexican won his first 13 bouts before tasting defeat for the first time against Amilcar Melian in January 2010. He rebounded to win 19 consecutive fights, including a revenge win over Melian, but dropped a majority decision to Abraham Han in October 2014. Subsequent losses to Julio Cesar Chavez (L UD 10), Elvin Ayala (L TKO 7) and David Lemieux (L UD 10) saw him relegated to gatekeeper status.

Although Reyes has lost his last three and seen his record dip to 37-8 (28 KOs), this fight should tell us where Butler is at this stage of his career.

The post Steven Butler: ‘Marcos Reyes is a good boxer, a good athlete, I need to beat guys like that’ appeared first on The Ring.