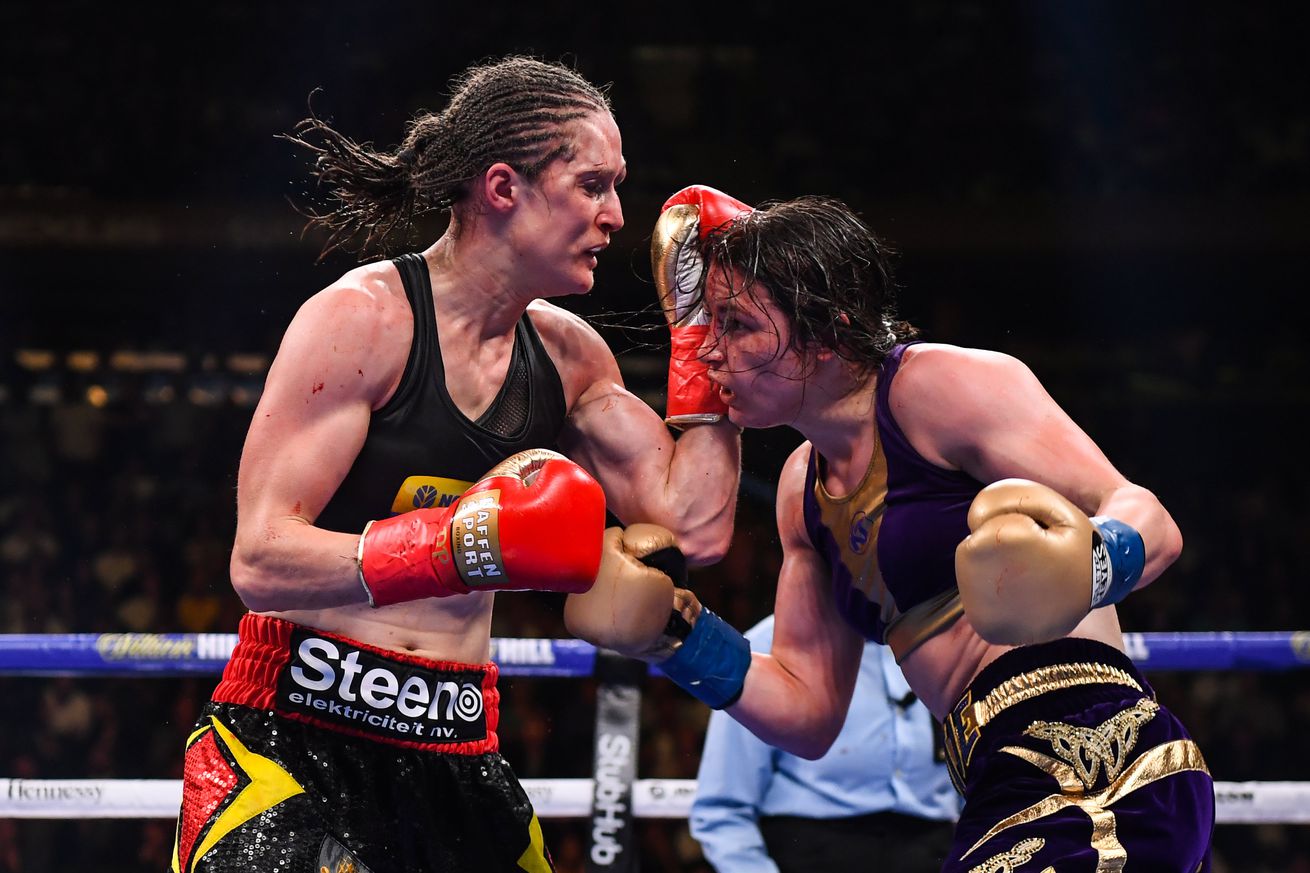 Delfine Persoon may get a second shot at Katie Taylor on the Whyte-Povetkin card.

With Amanda Serrano seemingly fully out of a planned fight with Katie Taylor, Matchroom Boxing are working on getting Taylor a suitable fight for Aug. 22, and the focus is on a rematch with Delfine Persoon, which Eddie Hearn says Taylor has requested:

“We are working hard on the Taylor versus Persoon rematch for August. Katie wants the biggest fights out there and when Serrano pulled out, Katie immediately asked about the Persoon rematch. The first fight was one of the best I’ve ever seen live and as a fan I would love to see it again.”

Taylor (15-0, 6 KO) and Persoon (44-2, 18 KO) met on June 1 of last year, as the co-feature on the first Joshua-Ruiz card at Madison Square Garden. Common predictions were that Taylor would win fairly handily and fully unify the lightweight division, but it wound up by far the toughest fight of her career, and a controversial majority decision going her way. Persoon had more than a few observers who felt she’d done enough to win.

The 35-year-old Persoon has fought just once since then, returning in her native Belgium last November to beat Helen Joseph. It’s notable that Persoon weighed in just over 127 for that fight, closer to featherweight than junior lightweight, let alone lightweight. But she’s also had a recent habit of coming in well under 135 for lightweight fights, too; in her last three bouts as a lightweight, she weighed in at 129¾, 131, and 130, the last one for her fight with Taylor.

Ireland’s Taylor, 34, moved up to 140 in November for her last bout, beating Christina Linardatou for the WBO title via decision, another fight that wasn’t exactly easy, but Taylor has admitted she’s really pushing herself to fight at 140 and makes 135 very easily still.

Hearn is a promoter so he’s using some promoter speak, but Taylor-Persoon really was a great fight, one of the better fights of 2019, and I don’t just mean “in women’s boxing” but boxing as a whole. It was physical, hard-hitting, and took a lot out of both women by the end.

If you haven’t seen the fight, you can watch it in full here.

Taylor-Person 2 would be the co-feature for the Aug. 22 Matchroom Fight Camp show headlined by Dillian Whyte vs Alexander Povetkin, and would make for easily the biggest boxing event since Wilder-Fury 2 in February. (It probably will be anyway, but still.)