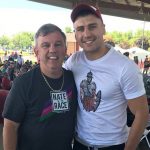 Teddy Atlas has to be in your top-10 list of boxing “characters,” and I’m thinking he’s high on your top five, even.

The analyst/trainer, right now proceeding as a trainer/analyst, being that he corners WBC beltholder Oleksandr “The Nail” Gvozdyk (17-0, 14 knockouts) on an ESPN/ESPN Deportes show on Friday, Oct. 18 (10 p.m. ET/7 p.m. PT) in a light heavyweight title consolidation bout against Artur Beterbiev, is a compelling communicator.

His intensity level is unsurpassed within the fight game sphere, as he blends alpha male confidence, and he blends it with a philanthropic drive that sees his Atlas Foundation having dispensed millions of funds raised to aid families who’ve fallen in between the cracks in the social safety net. Oldsters will get the reference when Atlas is described as neo Knute Rockne, what with his rich history of impassioned corner speeches at his charges, when they need a motivational surge.

His delivery and phrasing and colorful linguistic stylings make him, among trainers, at the top of the must-see TV totem pole.

He has a sly sense of humor, and displayed it when I asked him how his 32-year-old Ukrainian ace, Gvozdyk, will best the 34-year-old IBF champ Beterbiev (14-0, 14 KOs) from Philly’s Liacouras Center?

“By hitting him more than Beterbiev hits him,” Atlas said, with the thinnest of lip curls to indicate mirth.

In his last outing, against Radivoje “Hot Rod” Kalajdzic, we saw Beterbiev edge forward, look to impose his will and break down his foe. He’s undeniably strong, a bit brutish, he generally keeps it tight, and keeps pressure on. He will take a backward step, and then get right back to pushing his rival backwards.

Beterbiev can be counter-punched, but he isn’t a statue. He moves enough to not ever be a punching bag. Both hands have pop in them, so it’s not like The Nail has to be on the lookout for just one power source.

“A mauling bruiser of a light heavyweight,” said ESPN’s Joe Tessitore as he watched Beterbiev grind down Kalajdzic.

Beterbiev is not an impregnable fortress. Callum Johnson had some success being the aggressor, edging forward, his right hand snuck over the guard, and we wonder if Beterbiev has lost a notch in the reflexes department. We wondered harder when in round two versus Johnson, during trading, a left hook by Johnson dropped Beterbiev for the first time as a pro.

He climbed back up, shook off the sensation, and won via fourth-round TKO. So no, he’s not impregnable.

One perhaps pertinent side note … the two have fought before. In 2009, Beterbiev stopped Gvozdyk. “I went into that fight with a broken nose,” Gvozdyk told Boxingscene.com.”

He admitted he was too green, and quite ill prepared. Now, not so.

Atlas has marveled at the intelligence level of Gvozdyk.

Promoter Bob Arum has, too.

“You have to understand, Oleksandr is the smartest fighter, intellectually, I have ever promoted,” Arum told ESPN.

And he is smart enough to cut through Teddy’s rhetoric and glean the gems from Teddy’s instructions. A regular fighter might have difficulty with that, because he can’t get through Teddy’s emotional rhetoric.”

Note: Tim Bradley was the last fighter client Atlas worked with. They bonded hard and fast and Bradley responded seemingly well to Atlas’ sometimes tough-love approach, and taskmaster sternness, as well as his admittedly high expectations for his charges’ character level.

I asked Atlas about IQ in a fighter, asked if maybe sometimes a top tier intelligence level can be a deficiency? He didn’t bite. “We did our thinking already, now we have to go in there and react,” he said.

The post Teddy Atlas has “The Nail” Oleksandr Gvozdyk pointed in the right direction appeared first on The Ring.