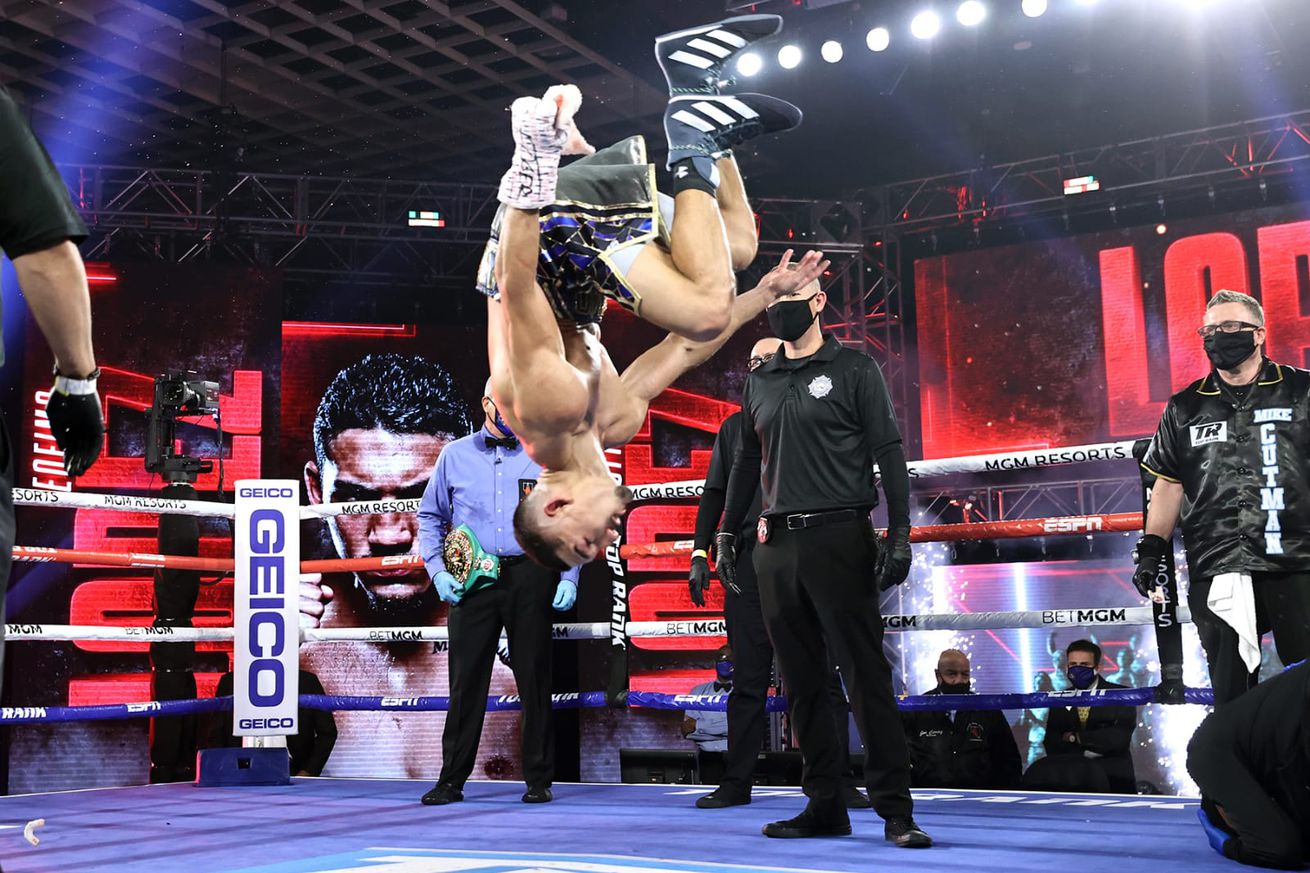 Lopez, his father, and the rest of his team are the reasons Teofimo won on Saturday.

You know it was a good one when you are still discussing it one, two days later, right?

The buzz concerning the Teofimo Lopez triumph — that’s the right word, it wasn’t a mere “win” — over Vasiliy Lomachenko is staying at that certain level as of Monday afternoon.

Sure, too much attention is paid to that scorecard from Julie Lederman. Part of that stems from the fact that this an era of excessive focus on self. I mean, really, who gives a shit end of day how much you hated Julie’s card, and what you scored Loma-Lopez. You care in the same way you care about who is on your fantasy football team, but in actuality, no one else gives a flying fuck.

I see people paying “zero doubt, Loma won round eight.” Bullshit. The first third of the round was close, I think Loma edged it. The second third Loma I think edged it by a greater margin. But that last third, Teofimo worked harder, threw more, was the better ring general, and landed the harder cleaner shots. And know what? The last third of the round is sometimes fresher in the mind of the human being watching, so it is totally plausible to give Teofimo that round.

No one out there, not me, not you, any of us, should be so married to our cards that we become boring in the manner we defend them. Unless you score the round, mark down the winner as soon as it ended, like Lederman, Cheatham, and Weisfeld did, then you cannot act as if your methodology is so pristine and your skills as an arbiter are superior to theirs. You cannot. But many of you still will.

This Dec. 12, 2019 story by Kriegel is one you probably should save as a bookmark, because it will still be pertinent and potent years from now. How he documented Teofimo having a panic attack because his heart and his head were telling him that being homeward bound, after a vacation with his missus in Greece, should provoke a “fight or flight” reaction shouldn’t be dismissed or glossed over. Kriegel, now an ESPN analyst, sees human beings in the ring, and figured out before most all people that Teofimo and his pop had a relationship dynamic that deserved extra attention and respect. Re-read that 2019 story now, or give it a look for the first time, it’s worth your investment.

I asked Kriegel for a top takeaway on Sunday, from that Lopez triumph. That round 11, when Loma started landing some flurries, Kriegel and many of us started thinking maybe this thing could change direction real quick.

“My girlfriend had the take: you could see, or feel, everything from the past pulling him back,” Kriegel told me Sunday. “It would have been no shame in giving in. He had already done more than most people thought. But instead, he shed that past, all the generational baggage that was pulling at him, and willed himself forward. Then, in the 12th round, he did something few of us ever do: he became the man he was supposed to be.”

— The post-fight press conference proved a worthy use of time, even though it was hellaciously late. Teofimo the elder mixed serenity, humility and shit-talking to good effect. He didn’t do a coffin dance on the Lomachenkos, not overly. But yes, he did tell Papachenko to go back to Ukraine, and give his son more dancing lessons. No, the father/trainer didn’t get all soft and gooey, and let all the bygones be bygones, but neither did he go overboard and fling verbal napalm. I told him I liked his session, giving a nod to his hat, which read “Nostradamus” on it.

For the record, Nostradamus was a French dude who we are told lived in the 1500s. He predicted things, and supposedly, had a good track record about foreseeing some shit others didn’t. Like, I guess, how the father told people when his son was 5-0 that this kid would be the pound-for-pound best really soon. And how he’d beat the tail off Lomachenko, when Loma was tagged the top pound-for-pounder by most analysts. “Crazy MFer,” that’s what plenty of people said about the dad, under their breath. “Give this cat a breathalyzer, please,” they muttered. But at that presser, the father earned the right to rub our noses in it with that hat.

Me, I think what the father/trainer did with his son is more impressive than a shitload of Nostradamus’ predictions, which typically need molding and shaping to fit modern day scenarios in order to seem eerily prescient.

— The fighter offered what is now seen as his customary mix of confidence, cockiness, humility and decency. He humbled himself by thanking God, but also didn’t pretend to be the humble dude when asked to assess what in fact Loma ended up bringing to the table.

“I expected more (from Lomachenko),” Lopez said at the post-fight, which he ended abruptly, taking issue with nitpickers who wanted to know what he’d do next, and looked to focus on what Loma did wrong, rather than what Lopez did well.

“He was pretty basic. I fought the guy who everyone said was the pound-for-pound (best). He’s going to the Hall of Fame for being a three-time (division) winner. Facing someone like him and doing what I did, you haven’t seen anything yet. I don’t fear no man. I’m in there to fight. He thought he could take me to the later rounds. He failed. I noticed with him starting to huff and puff. I was two steps ahead of him.”

Lopez is one to watch because of that mix. Athletes and celebs so often play it safe now, and look to kiss ass and not make waves. They don’t keep it real, because they fear blowback when being honest. But Lopez will go there, and yes, he deserves applause for that.

— You detect a theme in this column? Hope you do. More props for the Lopez crew. That includes the fella who wrapped the hands of Lopez before the fight. That man is boxing lifer Joe Quiambao, a New York guy, ex-New York Golden Glove champ, and a true gent, for the record. I reached out to the Split-T employee after the Lopez win to get a sliver of insight.

“Teofimo has a lot of heart, as he didn’t fold when he got to the big stage,” Joe told me. “He earned his way to the top by defeating real top fighters. He defeated a talented and tough fighter in Masayoshi Nakatani and a real champion and one of the best in the division Richard Commey to get to fight Loma, and then topped it off as he beat the man who was the man!

“Not only can he punch, he can box. He fought a disciplined fight as he kept his composure for 12 rounds, and showed his grit as he closed the show strong in the 12th round. He didn’t fold, he stepped up his game when he fought better competition. He can adjust in the middle of the fight. Last but not least, Teofimo proved to all the doubters that his dad was right! He has been telling me and the whole boxing world for years that his son will beat Loma, and he did. Easily!”

OK, and while we are at it, how did he become the designated wrapper?

“I learned from Gary Stark Sr, who trained Commey, John David Jackson, and Russ Anber, who works with Loma, and some others,” Joe said. “Then I put my own twist to it.

“When I first wrapped Lopez’s hands after he broke one versus William Silva, Teofimo goes, ‘Joe, no pressure, OK? But the future of Split-T and my boxing career is in your hands. But no pressure, OK?’”

— Rightfully so, Edgar Berlanga, the 168 pounder, saw a buzz uptick when he took out Lanell Bellows in round one at the Bubble. I thought that Bellows would make it out of round two, for sure, but no.

The New York boxer landed hard and clean on the Vegas-based Bellows and had him in trouble right quick. Some folks thought the stoppage by ref Robert Hoyle was quick, I didn’t. After all, it is always better to be a tick too early than a tick too late, because too late can mean death. I

Bellows told me he thought the stoppage was “premature,” but he “can’t complain.”

“This is boxing, people get hit. I didn’t go down so they should have let it go on,” he said. “I was good, he was strong and I expected it, but I’d rather go out on my back than my feet if I had to choose. Congrats to him, though!”