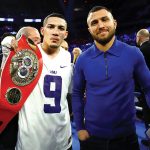 A relaxed, confident Teofimo Lopez addressed the media on Monday during a conference call and he obviously has not backed off on his intentions on what he plans to do to Vasiliy Lomachenko on October 17 in a lightweight blockbuster on ESPN from the MGM Grand in Las Vegas.

Lopez, the IBF lightweight titlist, looked considerably slimmer than he was a month ago, when The Ring paid him a visit at his New Jersey training camp. He said he’s very content entering the fight with Lomachenko, the Ring Magazine, WBA and WBO lightweight titleholder.

Lopez has been very adamant that he holds a simmering anger towards his Ukrainian counterpart.

When asked where the hatred stems from, “I have my reasons,” Lopez said. “When they’re in the spotlight, let them enjoy it, let them have it, I’ve never been the type to hate on someone or be jealous. But moving forward, I have my reasons and I’ve seen the way Vasiliy Lomachenko may carry himself outside of the sport, and I got to witness that personally.

“As a professional athlete I’m able to see behind the scenes and I just never liked it. I don’t like the way things have carried upon with him and how he approaches things.

“That’s why come October 17th,  I can’t wait to put hands on this man. I’m sorry, Bob (in reference to Bob Arum), I know that’s your guy, but he isn’t going to be your guy after this.”

Lopez conceded Lomachenko does have the experience factor over him. But so, did Richard Commey, who Lopez demolished in two rounds last December at Madison Square Garden in New York.

“I truly believe that I’m built different, and I’m one of those fighters that what can I not do,” Lopez said. “You people have only seen me for three, three-and-a-half years. Some people look into Teofimo now, or maybe only a year-and-a-half ago, maybe two years ago.

“If anything, my father (Teofimo Lopez Sr.) may be one of those guys (to get under Lomachenko’s skin), because they had their own altercation in person. Honestly, this is who I am. I look at it as a personal thing, and I’m looking forward to that night.”

Lopez did admit that this fight will define his career.

“This is the takeover,” Lopez said. “Come October 17, I’m looking to take more things. The fight will go in my favor. I see this fight only one way—and that’s by knockout.”