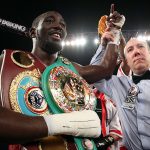 American star Terence Crawford will put his WBO welterweight title on the line for the fourth time when he meets former IBF titleholder Kell Brook at the MGM Grand in Las Vegas on Saturday.

Crawford, who is rated No. 2 by The Ring at 147 pounds, is looking forward to his return to action following an 11-month hiatus.

“I’ve seen a few of his fights. He’s a good counterpuncher, he’s a good boxer, he’s strong, he’s fast and intelligent. I don’t take nothing away from him.

“Camp is going great. I’m just counting down the days until it’s time to go to work. I’m prepared and I’m ready.”

The 33-year-old switch-hitter feels that his versatility and intelligence will trouble the British challenger.

“Just me being me,” Crawford explained. “My fighting style is different than other styles he has faced in the past. I feel like I’m smarter than him and an all-round better boxer than him.”

The fight takes place inside The Bubble at the MGM Grand with no live crowd. Crawford feels that it would have been best served in another location where a limited number of fans could have attended.

“We’re here now and there’s nothing else we can do but go in there and do what we’ve got to do and be professional.” As usual, Crawford has trained in Colorado Springs with his team, making the occasional drive home to see his family.

Fans and media regularly talk about the fighting pride of Nebraska facing the other big names at welterweight. However, Crawford wouldn’t be drawn into discussing it.

“Just keep performing at a high level,” he said of his future plans. “There’s always other opportunities to become a world champion in different weight classes.

“Everybody knows which fights I want and what fighters I want to share the ring with. It’s just a matter of getting those fighters in the ring with me. I don’t feel like I need to keep saying the same thing over and over, that gets old to me.

“Tune in and watch me and Kell Brook live on ESPN. I want to put on a show for everybody.”

Brook turned professional in 2004. He won the British title and claimed the Lonsdale belt outright before moving on to collect a cache of regional titles. In August 2014, he stunned Shawn Porter (MD 12) to claim the IBF welterweight title.

Three defenses followed, but when Brook was unable to secure the big 147-pound fights that he craved, he made the surprising decision to challenge then-unified middleweight titleholder Gennadiy Golovkin in September 2016. Although he had some moments early in the fight, Brook shipped a lot of punishment and was stopped in the fifth round.

After heeling up he dropped back to 147 pounds to face rising American star Errol Spence Jr. in his home city of Sheffield. The fight was evenly poised at the halfway point, but Spence stepped on the gas and broke down the proud Englishman in 11 rounds. The 34-year-old Brook (39-2, 27 KOs) moved up to junior middleweight and has fought sporadically since, winning three straight bouts.

KELL BROOK VOWS TO SILENCE DOUBTERS, CLAIMS TO BE AT HIS BEST FOR CRAWFORD SHOWDOWNTERENCE CRAWFORD: THE GREATEST HITS

Crawford vs. Brook, plus undercard action, will be broadcast live on ESPN in the US and is available via pay-per-view on Premier Sports in the UK. Premier Sports 1 is available in HD via Sky (412 & 429), Virgin TV (551 & 552) and online via the Premier Player, available on app and desktop. New subscribers to Premier Sports can easily sign up via the website – www.premiersports.com.

The post Terence Crawford gives challenger Kell Brook respect, promises to put on a show appeared first on The Ring.