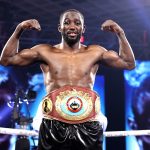 In boxing though, it only takes one punch. And for Crawford, it started with a jab.

A right jab out of the southpaw stance caught Brook lunging in, rocking Brook to his boots, and sending his head through the ropes. Referee Tony Weeks ruled it a knockdown, saying that the ropes had kept Brook on his feet, but the outcome had already been decided. Crawford jumped right on Brook right after, landing three overhand lefts that convinced Weeks to stop the fight at the 1:14 mark.

@terencecrawford stuns Kell Brook with a big right hand and wastes no time closing the show in Round 4. Goodness … #CrawfordBrook pic.twitter.com/pvD56GdSdL

With the win, Crawford (37-0, 28 knockouts) of Omaha, Nebraska retains the WBO welterweight title for the fourth time, while Brook (39-3, 27 KOs) of Sheffield, England sees his three-fight winning streak snapped.

“I was just trying to gauge the distance, he had good distance and I was trying to find my rhythm in between getting my distance together,” said Crawford, 33. “That’s why it was so competitive at first, I couldn’t get my shots off.”

This is a breaking news report. Please refresh for updates.