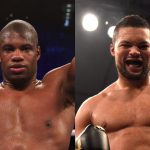 Last month the eyes of the boxing world were on the Andy Ruiz Jr.-Anthony Joshua heavyweight title fight in Diriyah, Saudi Arabia.

Would Joshua become one of only a handful of men to regain the title in a direct rematch, or would Ruiz repeat his sensational upset performance? We had an inkling it would be the former when Ruiz came in at a hefty 283 pounds, some 15 pounds heavier than the first go around, while a svelte Joshua was 10 pounds lighter at 237. Joshua soundly out boxed Ruiz over 12 rounds to regain IBF, WBA and WBO titles.

Joshua, who is rated No. 3 by The Ring at heavyweight, will be back in action soon, but the opponent is still to be confirmed. Rumors abound that the hard-hitting Englishman may vacate the WBO title and face IBF mandatory challenger Kubrat Pulev, which would clear the way for former undisputed cruiserweight champion Aleksandr Usyk to meet Joseph Parker for the vacant strap. Outside of the Joshua sweepstakes, there’s the massive heavyweight rematch on February 22 between WBC titleholder Deontay Wilder and Tyson Fury, which will also decide a new Ring Magazine champion.

However, it’s worth noting that there are several up-and-coming heavyweights that are looking to crash the party. Some will rise and some will fall, but it’ll be fun watching things unfold. Here, in alphabetical order, we look at 10 glamour division prospects that are worth keeping an eye on:

Efe Ajagba (12-0, 10 knockouts): Ajagba caught the eye with a highlight reel knockout at the 2016 Olympics. Even though the 6-foot-6-inch Nigerian didn’t medal, he was courted and signed by Richard Schaefer’s Ringstar. Ajagba, who doesn’t have particularly strong amateur credentials, moved to Texas and hooked up with acclaimed trainer Ronnie Shields. He has been kept active, fighting regularly on PBC cards and in August 2018 he gained unique attention when opponent Curtis Harper stepped out of the ring as soon as the bell rang. Ajagba, 25, has beaten some solid opponents, including battle-harden veteran Amir Mansour (RTD 2), Michael Wallisch (TKO 2), and he survived a gut-check, getting off the canvas against Iago Kiladze (KO 5). With PBC behind him, he should make the transition from prospect to contender this year.

Daniel Dubois (14-0, 13 KOs): Dubois went 69-6 as an amateur. As a teenager, he signed professional forms with Hall of Fame promoter Frank Warren, who expertly maneuvered the now 22-year-old to British and Commonwealth titles. Massive at 6-foot-5 and 240 pounds, “Dynamite” lived up to his billing by impressively taking out Nathan Gorman (KO 5) in an all-British dust up last summer, and in his most recent outing he scored a one-punch knockout of Japanese heavyweight Kyotaro Fujimoto (KO 2). Dubois could potentially be heading toward a huge domestic showdown with Joe Joyce in the spring, which will give us a good indication of how far both men can progress.

Junior Fa (19-0, 10 KOs): Fa took bronze at the 2010 Commonwealth games and also scored two wins over countryman Joseph Parker in the unpaid ranks. The New Zealander turned professional in February 2016 after failing to make the Olympics and won his first nine fights at home before making his U.S debut on the undercard of Deontay Wilder’s title defense against Gerald Washington. He is promoted in the U.S by Lou DiBella and has fought on PBC and Top Rank shows. The 30-year-old isn’t the biggest puncher or a blue-chip prospect, but he’ll likely secure a fight-changing opportunity as the B-side – the rest is up to him.

Jermaine Franklin (20-0, 13 KOs): Franklin is a solid if unspectacular heavyweight. He lost in the final of the 2013 Golden Gloves to the more experienced Cam F. Awesome, however, showed grit by returning the following year to beat Awesome in the final. He turned professional in April 2015 and has quietly gone about his business. The 26-year-old Michigan native won three times in 2019, all on ShoBox, with mixed reviews. He labored against Rydell Booker (UD 10), struggled with Jerry Forrest (SD 10) but looked better dropping and widely out-boxing Pavel Sour (UD 10). Franklin’s lack of power and frequent inability to finish off dazed opponents suggest he’s not a top-drawer heavyweight. But he’s a solid enough addition and, like Fa, will probably get his chance against a more fancied opponent.

Filip Hrgovic 10-0 (8 KOs): The big Croatian was a top amateur for several years, winning gold at the 2010 World Youth Championships by defeating future WBO heavyweight titleholder Joseph Parker and Tony Yoka in the final. He also competed in three World Championships and received bronze at the 2016 Olympics. Aligning himself with Sauerland Event as a professional, Hrgovic is coached by well-respected trainer Pedro Diaz in Florida. The 27-year-old made his DAZN/ U.S debut in May, stopping Gregory Corbin (TKO 1) and earned a spot on the Ruiz-Joshua II undercard where he blitzed one-time fringe contender Eric Molina (KO 3). The Sauerland’s are bullish about Hrgovic and keen for him to face the best. Expect Hrgovic to face improving opposition and be a bona-fide top 10 contender by the end of the year.

Bakhodir Jalalov (6-0, 6 KOs): The 6-foot-7 Uzbekistani southpaw is only 25 and has competed in three World Championships. In a highly controversial maneuver, his 2019 gold medal victory was tarnished by the fact that he’s already turned professional by that point. Jalalov turned over in May 2018 and has won all six fights inside four rounds. With his size, southpaw stance, power and amateur pedigree, he should have a bright future. This year should be big for the Lou DiBella promoted boxer.

Joe Joyce (10-0, 9 KOs): Joyce enjoyed a very impressive amateur career, winning Commonwealth and European gold, World Championship bronze and Olympic silver. He also earned wins over Hrgovic, Jalalov and Tony Yoka in the unpaid ranks. Joyce turned professional in his 30s but has moved quickly, posting more notable wins than anyone else on the list: Kiladze (KO 5), one-time prospect Joe Hanks (KO 1), Bermane Stiverne (TKO 6), Alexander Ustinov (TKO 3) and Bryant Jennings (UD 12). “The Juggernaut” is 6-foot-6′ and approximately 250 pounds. He often looks slow and has been caught, but his chin has passed every test. The 34-year-old was set to face Marco Huck for the vacant European title, but the former cruiserweight titleholder suffered an injury. Next up could be a mouth-watering fight with domestic rival Dubois.

Mahammadrasul Majidov (2-0, 2 KOs): Majidov was a fixture of the amateur scene for much of the 2010s. The burly Russian represented Azerbaijan as an amateur and won gold at the 2011 and 2013 World Championships. He also fought at the 2012 and 2016 Olympics, taking bronze at the former. Majidov boasts amateur wins over likes of Joshua, Ivan Dychko and Tony Yoka. It looked like he would miss the boat as a professional but finally turned over last September, just weeks before his 33rd birthday. He has won both fights to date with considerable ease. With his background and advancing age, look for him to take calculated risks and move quickly.

Arslanbek Makhmudov (10-0, 10 KOs): The formidable Russian was a top amateur and regularly competed in the World Series of Boxing. During that time the 30-year-old caught the attention of Eye of the Tiger management, who moved him into the paid ranks in December 2017 under the tutelage of Marc Ramsay. At 6-foot-5 and roughly 260 pounds, he is an imposing physical specimen. Although not the quickest, he is immensely strong and powerful. Recently, Makhmudov demonstrated his power by blowing through a faded Samuel Peter in one round. His team are extremely high on him and looking to put him in big fights this year. All 10 of his bouts have taken place in Canada.

Tony Yoka (7-0, 6 KOs): The poster boy of French boxing was a top amateur. He fought at the 2012 and 2016 Olympics, winning gold at the latter, and also took a gold at the World Championships in 2015. As an amateur, Yoka posted wins over Hrgovic and Joyce. At 6-foot-7 and around 235 pounds, he possesses size advantages over most of his opposition and is more athletic than most. But it remains to be seen if Yoka, who was banned for 12 months after “missing” three drugs tests, can deal with the physicality of the sport or if he’s just a pretty boy.

The post The Heavyweight debate: Which fledgling prospect holds the keys to the future? appeared first on The Ring.