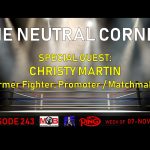 On episode 243 of The Neutral Corner boxing podcast, host Michael Montero was joined by Christy Martin, a pioneer in women’s boxing. The former champion, known as “The Coalminer’s Daughter,” started a promotional company in 2016.

“For almost all of my life, I’ve been in the world of boxing,” she told The Ring. “After retiring, I felt the way I could stay attached to the sport was to be a promoter. To be able to take a fighter and help them get to Madison Square Garden, the MGM Grand – all those cool places I got to fight – that would give me almost as much satisfaction as having that world title around my waist.”

Christy Martin Promotions is putting on a card this Saturday in Rock Hill, South Carolina. Fans are permitted and may purchase tickets online at Event Brite or at the venue box office. The card will be broadcast/streamed on TyC Sports.

Most of Martin’s shows have been in North and South Carolina, where she is trying to build a market. “I started here in the Carolinas because as a new promoter, I need to cut my teeth,” she said. “At the same time, I’m trying to change the thought process of the trainers and fighters here, to be more than a fighter for someone else to build a record off of. We’ve recently expanded into the Florida market and, should the COVID thing finally slow down, in 2021 we plan to go to Texas.” Christy Martin (right) lands a blow on Deidre Gogarty during a bout in Las Vegas, Nevada. Martin won the fight with a decision in the sixth round. Mandatory Credit: Al Bello /Allsport

It wasn’t until very recently that all the major sanctioning organizations offered women’s world title belts. In fact, when Martin defeated Ireland native Deirdre Gogarty in 1996, the WBC recognized her as “nominal female champion”. It was female fighters like Martin who paved the way for Mia St. John, Laila Ali, Holly Holm and others in the following generation.

Today women’s boxing is bigger and better than ever; all of the promoters, networks and sanctioning groups are involved. But Martin doesn’t think of herself as a pioneer.

“I never really wanted to have that moniker of the pioneer,” she said. “I just wanted to be a fighter, I just wanted to fit in. I felt that every time I fought, I helped women’s boxing, but not by waving a flag and saying ‘look at me I’m a female fighter.’ But I think there are some really great female fighters out there right now. (Former amateur national champion) Tika Hemmingway, who I see as the possible future of women’s boxing, will be making her pro debut on my show this Saturday.”

There was plenty of action around the world last weekend. On Friday in California, Jaime Munguia opened a nasty cut on Tureano Johnson’s lip during the sixth round of their middleweight bout. The fight was stopped and Munguia claimed a KO 6 win. Tough break for Johnson, who fought well in spots. In the co-main, welterweight up-and-comer Rashidi Ellis scored a unanimous decision victory over fellow prospect Alexis Rocha.

There were three high-profile cards on Saturday. Aleksandr Usyk scored a point’s win over Derek Chisora in London. The heavyweight fight headlined a card on DAZN. In the co-main George Kambosos won a controversial split decision over Lee Selby in a lightweight bout. In Las Vegas, Naoya “Monster” Inoue dominated, dropped and stopped Jason Maloney to defend his unified bantamweight titles. In Texas, Gervonta “Tank” Davis and Leo Santa Cruz let it all hang out in their junior lightweight fight, before Davis landed a beautiful left uppercut that KO’d Cruz toward the end of the sixth round. The Showtime PPV main event, which took place in front of fans at the Alamodome, was fought on even terms up until the stoppage. Both men landed and ate plenty of leather.

This week’s schedule features a PBC on FS1 card on Wednesday night and a women’s junior welterweight fight on Friday (Impact Network).

On Saturday, Luis Ortiz fights Alexander Flores in a PBC on Fox headliner from Los Angles, while Devin Haney fights Yuriorkis Gamboa in a Matchroom on DAZN headliner from Florida.

Quotes from the Callers:

One caller didn’t like Floyd Mayweather’s recent comments about the sport having too many championship belts. “He’s a hypocrite because he fought Zab Judah after he lost his belts against Carlos Baldomir. Floyd’s own guy, Tank Davis, has a paper title that means nothing. It’s the same old same old with Floyd, he loves to manipulate uneducated fans.”

Another caller doesn’t feel Gervonta Davis is getting enough credit for his win over Leo Santa Cruz. “The same people that were saying the better man won between Lomachenko and Lopez, that size had nothing to do with it, are now saying Davis beat up on a smaller guy (Santa Cruz). It’s just another day in boxing with more fan hypocrisy.”

@31:31 Review and Preview (Munguia, Usyk, Inoue and Davis win, previews of PBC on Fox and Matchroom on DAZN cards)