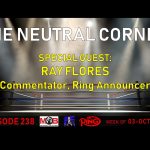 On episode 238 of The Neutral Corner boxing podcast, host Michael Montero was joined by fight commentator and ring announcer Ray Flores. He not only called the PBC on FS1 card last Wednesday, but did the international broadcast of the Charlo Doubleheader card on Showtime PPV Saturday night.

“I’m still recovering from the weekend,” he told The Ring. “What a fantastic night of boxing Saturday. It was a fun week for me, being in two different “bubbles” in Los Angeles and Connecticut as well. And I’ll be back in the LA bubble for the PBC on FS1 coming up this weekend.”

Ray has been vocal about some people in the boxing community being overly critical of the sport, while talking up – if not outright promoting – the UFC. One such name is famed boxing trainer and commentator Teddy Atlas, whom he had some very strong words for.

“I hope that by the time my career is over, I’m able to build a quarter of the reputation that Teddy Atlas has been able to accomplish. He’s a legend, made no mistake about it. But what Teddy has been doing recently, it would be like covering the NFL for 30 years, and then two years later when you’re no longer working in the NFL, you start saying, ‘The NFL sucks, don’t watch the NFL anymore, watch baseball instead.’ That’s crazy. You made a wonderful living in boxing and now you turn your back on it? You try to make it seem like UFC is the Holy Grail. Look, there are problems in all sports.”

Flores continued. “Let’s not act like one sport is doing everything correctly and the other isn’t, because that’s the furthest thing from the truth. When you start dumping all over the sport that you made a great living with, get out of here with that nonsense! Get off your high horse. Instead of us focusing on the younger fighters, the young champions, we’re all focused on the stupidity that came out of your mouth.”

“I want everyone to do well. Not just MMA, not just one particular outfit in boxing, I want every major combat sports promotion to do well.”

If only everyone in the fight sports community felt the same.

Jermall Charlo (31-0 22 KOs) busted up Derevyanchenko in a competitive fight that went the distance. The undefeated Charlo has proven himself as an elite middleweight but still has more to prove before topping Canelo Alvarez and Gennady Golovkin in the divisional ratings.

Jermell Charlo (34-1, 18 KOs) dropped Rosario three times, stopping him with a hard jab to the body in the eighth round to unify three junior middleweight titles. He also claimed The Ring championship and solidified himself as the best 154-pound fighter in the world.

Mairis Briedis (27-1, 19 KOs) fought a controlled, intelligent fight against Dorticos, scoring a majority decision win in the season two final of the World Boxing Super Series cruiserweight tournament. It should have been a unanimous decision if not for judge Joerg Milke’s erroneous 114-114 scorecard. Briedis picked up The Ring championship, the Ali Trophy and the IBF title.

Jack Alter from Indiana does not believe Jermell Charlo has done enough to be considered “pound for pound” just yet. “I think junior middleweight is a trash division,” he said. “I rate Dmitry Bivol higher than Jermell Charlo because he has defeated the better fighters. And I think Jermall is better than Jermell.”

Mark from Ireland had some interesting notes regarding the pound-for-pound debate. “I think Jermell is in the discussion,” he said, “but another fighter who is going unrecognized for what he accomplished last weekend is Mairis Briedis. He just became a three-time cruiserweight champion. The only fighter to beat him is Aleksandr Usyk, one of the best fighters pound for pound. It wasn’t a guy like Tony Harrison (who defeated Charlo in 2018), who has been knocked out multiple times.”

@9:41 are the Charlo Brothers pound for pound top ten?