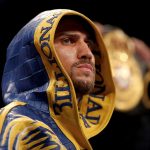 The Ring Magazine first introduced its divisional ratings in 1925 and 95 years later they’re still going strong. It is no exaggeration to claim that these independent rankings are the most respected and accurate in world boxing today.

The ratings panel is made up of a dozen experts from around the world. Opinions are shared, debate takes place, and the final decision on who should be ranked where is decided democratically. It sounds easy but it can be an arduous and time-consuming process.

During the past few weeks, the sport of boxing, like the rest of us, has been on lockdown due to the COVID-19 pandemic. It therefore makes sense for The Ring to use this time to revisit each and every division, analyze the fighters who are ranked and predict what they’re likely to do in the future.

Up next is lightweight. As always, please enjoy the debate and respect other people’s opinions.

THE PAST: The supremely talented former amateur standout took to professional boxing like a duck to water. After losing to Orlando Salido (SD 12) in his second professional bout, he rebounded to pick up the vacant WBO featherweight title at the expense of Gary Russell Jr. (MD 12). He has since beaten the likes of Roman Martinez (KO 5), Nicholas Walters (RTD 7), Guillermo Rigondeaux (RTD 6) and Jorge Linares (TKO 10). Lomachenko has won world titles at 126, 130 and is the current Ring Magazine, WBA and WBO 135-pound champion.

THE FUTURE: Was heading toward a unification matchup with charismatic IBF titleholder Teofimo Lopez. Due to travel restrictions, an interim bout for both may be necessary before this bout can be rescheduled. THE PAST: Lopez represented Honduras at the 2016 Olympics. Since turning professional, the big punching 22-year-old has gone about his business in devastating fashion, scoring highlight reel knockouts against Mason Menard (KO 1), Diego Magdaleno (KO 7) and Edis Tatli (KO 5). After a learning experience win over Masayoshi Nakatani (UD 12), Lopez was back to his brilliant best, demolishing IBF titleholder Richard Commey (TKO 2).

THE FUTURE: Staying sharp in the gym. May take a fight in the U.S. before tangling with Lomachenko.

THE PAST: Haney turned professional at 17 in Mexico. This super talent has scored wins over Menard (RTD 9), Juan Carlos Burgos (UD 10) and Antonio Moran (TKO 7). After being upgraded to full WBC titleholder, following his dominant win over Zaur Abdullaev (RTD 4), he outboxed Alfredo Santiago (UD 12) in his maiden defense. Unfortunately, Haney, now 21, suffered a shoulder injury against Santiago that required surgery, but he is now fit and ready to return.

THE FUTURE: Will make a voluntary defense before facing the winner of Luke Campbell-Javier Fortuna.

THE PAST: The big-punching Ghanaian worked his way up the ranks before suffering debatable defeats on the road to Robert Easter Jr. (SD 12) in an IBF title fight and Denis Shafikov (SD 12). Rebounded with three wins before stopping Isa Chaniev (TKO 2) for the vacant IBF title. Commey made one defense against iron-jawed veteran Ray Beltran (KO 8) before losing to Lopez.

THE FUTURE: Licking his wounds after the devasting loss to Lopez. Will make another title run, but has also spoken about moving up to junior welterweight in the future.

THE PAST: Campbell, a tall and quick-handed lefty, claimed gold at the 2012 London Olympics. In the professional ranks, the popular Englishman has beaten former world titleholder Argenis Mendez (UD 12) and perennial contender Darleys Perez (TKO 9). Suffered a close loss to Jorge Linares (SD 12) in a Ring Magazine/ WBA title shot, but was well beaten by Lomachenko (UD 12) in his second world title attempt.

THE FUTURE: Had been due to face Fortuna on April 17, however, that was postponed and will take place at a later date. The winner will be in line to face Haney for the WBC title. THE PAST: Garcia is every bit the new-age fighter; a social media phenom, with millions of followers. Initially there was a question mark as to whether Garcia’s achievements would live up to his outside the ring persona, and hppeared to plateau in 2018 before teaming up with Eddy Reynoso. Since then “Kingry” has kicked things up a notch and showed his vaunted power, knocking out solid contenders Romero Duno (KO 1) and Francisco Fonseca (KO 1).

THE FUTURE: A mooted summer showdown with Jorge Linares looks like an exciting proposition that could push the youngster closer to stardom.

THE PAST: The Toledo, Ohio native stopped Argenis Mendez (TKO 5) to earn a shot at the IBF title, which he claimed by edging Commey (SD 12). That win earned him the key to his hometown. The tall boxer-puncher then turned back the challenges of Luis Cruz (UD 12), Shafikov (UD 12) and Javier Fortuna (SD 12) before losing his title in a unification with then WBC titleholder Mikey Garcia (UD 12). Has since fought Rances Barthelemy to a draw and outboxed Adrian Granados (UD 10).

THE FUTURE: Looks like he’ll be operational between 135 and 140 and go wherever the opportunity is.

THE PAST: The skilled Domincan Republic southpaw was a long-time contender at junior lightweight before moving up to lightweight. He holds wins over Bryan Vazquez (UD 12), Sharif Bogare (UD 10) and Jesus Cuellar (TKO 2).

THE FUTURE: Will face Campbell to earn the right to face Haney. Jorge Linares clocks Al Toyogon with a right cross during his comeback fight in Tokyo. Photo by Naoki Fukuda

THE PAST: Linares has won world titles at 126, 130 and 135 pounds in an outstanding career. Holds wins over Kevin Mitchell (TKO 10), Anthony Crolla (UD 12 /UD 12) and Campbell (SD 12). Has been let down in the past by his fragile skin and chin – all five loses were inside the distance – but arguably gave Lomachenko (L TKO 10) his toughest fight, dropping the Ukrainian wizard in the sixth. Linares is currently on a two-fight winning streak and looked something like his former self against Carlos Morales (TKO 4) last time out.

THE FUTURE: Craves a big fight and may well get one with upstart Garcia this summer.

THE PAST: A professional for over 15 years, he has fought all bar one of his fights in Ghana. Recently signed with an American manager and that will help him gain much needed attention. Boasts wins over past their prime former world titleholders Mzonke Fana (UD 12) and Paulus Moses (UD 12).

THE FUTURE: Had been scheduled to face Rey Perez in Atlantic City on March 19. Perhaps that can be rescheduled.

THE FUTURE: Former two-weight world titleholder is looking for a shot and may head to 140 in search of a third title in as many divisions.

The post The Ring Magazine Ratings Reviewed: Lightweight appeared first on The Ring.