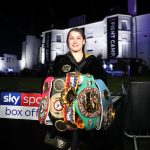 With that acknowledgement, The Ring is proud to announce that the 98-year-old publication has assembled a Women’s Ratings Panel to rank the top female boxers in each weight class, as well as the pound-for-pound top 10.

This week we debut the mythical rankings, which experienced a shake-up at the top of the list with McCaskill’s upset of Braekhus, and the top five of six divisions – flyweight, lightweight, junior welterweight, welterweight, middleweight and super middleweight.

But for now, let’s get to know The Ring Women’s Ratings Panel:

Diego Morilla – a 25-year veteran of the fight game who has covered boxing in the U.S., Puerto Rico and Argentina for major outlets including ESPN.com, HBO.com, Maxboxing.com and The Ring. He lives in Buenos Aires and is the moderator of the weekly debate of the women’s ratings panel.

Thomas Gerbasi – a 25-year veteran who covers combat sports for various publications, including The Ring (where he serves as the women’s boxing feature writer) and BoxingScene.com. An award-winning member of the Boxing Writers Association of America, Gerbasi is also the current Editorial Director for the Ultimate Fighting Championship.

Yuriko Miyata – an editorial staff writer for Japan’s Boxing Magazine since 1997. She has lived between Southern California and Tokyo since 2004, focusing on female boxers as much as the men. Miyata is on the staff of the female boxing website ThePrizeFighters.com and is The Ring’s Japan correspondent.

David Avila – Southern California’s godfather of women’s boxing coverage hails from a boxing family that includes his father, who fought at the Olympic Auditorium during the 1950s, and his great grandfather, Battling Ortega, who fought numerous world champions from 1916 to 1928. Avila formerly wrote for the L.A. Times and has a weekly column for the Riverside Press-Enterprise, La Prensa, Unidos and Excelsior newspapers. He is the West Coast editor for TheSweescience.com and has written for the respected website since 2005. Avila, who has covered women’s boxing since the 1990s, is the new editor of ThePrizefighters.com.

Sue “TL” Fox – a pioneer female boxer during late 1970s and founder of the Women Boxing Archive Network (WBAN), and the International Women’s Boxing Hall of Fame (IWBHF). WBAN, started in 1998, is the major worldwide source of coverage and history for women’s boxing, amateur and professional. The IWBHF was created in 2014.

Malissa Smith – author of “A History of Women’s Boxing”, the first comprehensive narrative of the sport that Ring Magazine dubbed “The Bible of Women’s Boxing.” Smith continues to write about the sport on her popular blog Girlboxing and provides regular commentary on such boxing shows as Tha Pugilist KOrner, Tha DAWG Pound, and Wombat Sports. Smith is also a founding member of the IWBHF Board of Directors and helped develop the Women’s Boxing exhibit for the International Boxing Hall of Fame in Canastota, New York.

Mark Jones – a member of the International Boxing Research Organization (IBRO) whose opinions have been published in The Ring and are posted on the web in a monthly column entitled The Sweet Side of the Sweet Science. Jones writes a boxing blog (www.boxingjones.com) and has posted a monthly pound-for-pound list for the past eight years. He’s also a voter in both the Pioneer and Modern women’s categories for the International Boxing Hall of Fame.

Wildalys Figueras-Snows – a spokesperson on the role of women in the sport from the boxing-rich island of Puerto Rico, Figueroa-Snows created “Boxeo Con Lipstick”, a website devoted to female boxing. She has also served as TV contributor and panel analyst for ABC, Telemundo, and Wapa.

Lupi Gutierrez-Beagle – the daughter of former pro boxer Javier ‘Babyface’ Gutierrez, who boxed at legendary Los Angeles boxing venues, such as the Olympic and Hollywood Legion, during the 1950s. In 2017, Gutierrez-Beagle founded Boxing Meets Beauty, a promotional platform for both amateur and professional female boxers. Gutierrez-Beagle is co-host of the podcast “2-Min Round: Hooks and Jabs on the Female Fight World.”

Yesica Palmetta – started out training side by side with her brother, welterweight fringe contender Alberto Palmetta, in the same gym where former world titleholders Jorge Barrios and Erica Farias used to train. She switched from gloves to laptops when she joined Ring de Ideas, an Argentine boxing website and magazine, in 2008. Later that year she joined the staff of Ring Side magazine under legendary Argentine writer Carlos Irusta, also joining him in the radio show “La Red.” She later became a member of Cerca del Ring and Boxeadoras Argentinas, two radio shows where she currently continues to collaborate. In 2018 she published “La Novia del Boxeo”, a biography of Yesica Bopp. She is also a freelance collaborator of ESPN’s new TV show “ESPN Knockout”.

Irene Deserti – founder and creator of “Rincón Rojo Magazine” in Mexico City since 2017 (which includes a weekly podcast) and director of the female boxing website “Boxeadoras Argentinas” since 2014, Deserti (born in Argentina) is currently one of the most dedicated female boxing writers anywhere in the world.

OK, let’s get to the Women’s Ring Ratings Update: A “ten-point must system” was used in compiling the rankings. The Panel submitted their pound-for-pound top 10 and divisional top fives with No. 1 receiving 10 points, No. 2 receiving 9 points, etc.

Shields replaced Braekhus at No. 1 following the long-reigning pound-for-pound queen’s majority decision loss to McCaskill on August 15 and remained in the top spot after Taylor’s narrow repeat victory over Persoon on August 22. Some Panel members (Morilla, Gerbasi, Jones and Smith) pushed for Taylor to replace Shields at the top spot, however, Deserti, Palmetta, Figueroa, Fox, Miyata, Gutierrez-Beagle and Avila maintained Shields as their No. 1. Braekhus dropped to No. 3, while her conqueror advanced to No. 4.

“I vote for Taylor and Shields to swap places. It is a very debatable change, and I have no problem seeing many of you disagreeing with this. But Taylor-Persoon was awesome enough to warrant the winner some consideration for a bump (to add to the ones they imprinted on each other’s heads) up in the P4P rankings. During her best moments in the fight, Taylor looked truly extraordinary in attack and defense. And even in retreat and under fire, Taylor’s defensive skills and overall boxing ability were superb. I honestly believe that if Claressa Shields had been fighting out of either one of those two corners, we would have seen her ‘0’ disappear.

“I know this may not be a notion that many of you may share, but it is definitely worth discussing.”

“I agree the Taylor-Persoon fight was great boxing. I felt that Katie Taylor clearly won the fight, and except for some of the middle rounds where she got caught inside and fought Persoon’s fight, she showed confidence and ring mastery in handling Persoon’s continuing onslaught. Given her recent fights, her two weight mastery, and her evolution in the ring following her first Persoon fight and the Linardatou fight in-between, I will change my vote to give Katie Taylor the No. 1 spot and Claressa Shields the No. 2 spot. I truly hope that Shields is able to come back into the ring soon.

“I am still rating Braekhus higher (than McCaskill) because of her winning record and longevity as a champion but have moved McCaskill up significantly in recognition of her win. I have her above Serrano, because of McCaskill’s more recent win and the significance of her opponent.”

“Braekhus should remain in third place because what happened on August 15 was not at all clear.”

“I’m not in the minority with the belief that Cecilia Braekhus won that fight. I thought she won seven or eight of the rounds, and McCaskill didn’t do enough to lift the titles from an internationally known champion who is considered by many experts as one of the greatest female boxers of all-time. The bout was held in a state without a vibrant boxing culture and scored by judges who were relatively unknown internationally. The two judges that scored for McCaskill favored her high-volume (200 more punches thrown), ineffective aggression; it wasn’t enough to earn a decision victory over an all-time elite boxer.”

So, to recap our first Women’s Ring Ratings Update, Shields was voted No. 1 pound for pound, McCaskill advanced into the pound-for-pound top five and is now No. 1 in two weight classes. (If Braekhus, who could be considering retirement, elects to stay in the game and enact her rematch clause with McCaskill their return bout will determine The Ring’s inaugural welterweight champion.)

Taylor remains The Ring/undisputed lightweight champion and No. 2 in the pound-for-pound rankings.

Next week we will present more weight class rankings, including junior flyweight and junior lightweight, and we will soon have permanent women’s rankings pages on this website. Stay tuned.

The post The Ring presents its inaugural women’s pound-for-pound, divisional rankings appeared first on The Ring.