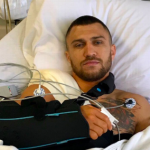 It is Thursday, and there is still some residual chatter going on, from the Saturday night showdown between Teofimo Lopez, the young gun repping a Brooklyn ethos, and Vasiliy Lomachenko, the Ukrainain technical wizard who has always preferred to let his ring generalship speak loudest for him.

I have made my sense of it, mostly. But I’m still mulling. And so, because of that, I did what I often do in such a situation—-I reached out to some people who know their stuff, and also, are not afraid to communicate their truth.

The fantastic four at SiriusXM, Randy Gordon, Gerry Cooney and Ak ‘n Barak, I asked the gents this query:

Is it poor form for a fighter, in this case Vasiliy Lomachenko, to come in to a fight injured and then after losing, announce you were hurt and that you needed surgery?

“It is more than poor form,” Randy Gordon (below) told RING. “It is very wrong to hide a potential outcome-changing injury from everyone. Manny Pacquiao did the same thing against Floyd Mayweather in 2015. Buddy McGirt did the same thing against Pernell Whitaker in 1992. Sugar Ray Leonard did it against Hector Camacho in 1997. Ironically, Leonard and McGirt became Hall-of-Famers. Unquestionably, Pacquiao is headed there, as well. The public forgave each one of them for hinding their injuries and for their deceit. For all he’s done in his amazing short pro career, the public will forgive Lomachenko, too.” “Yes it was poor form,” answered Gerry Cooney. “First of all, he shouldn’t have been in the ring if he was hurt, especially at that level –being pound for pound, so that’s on him. Stop taking the thunder away from Lopez, who did a great job. There is no return clause. Lopez should move on.” Gentleman Gerry says no the the idea of a rematch, and that Teofimo should pick and choose his next foe, leaving Loma behind.

Ak weighed in, as well. “If you watch the featured piece on ESPN YouTube titled “Blood Sweat & Tears Part 2,” Loma clearly stated that he has had injuries and issues in most of his fights .. and that this was the first time that he will be one hundred percent with zero issues.”

“I never showed one hundred percent of my skill,” Loma said 18 plus minutes into that promo program, “because always there was some little problem. The fight with Linares, I had the problem with my shoulder. If we remember, with Pedraza, it was my first fight after surgery. And Crolla, I broke my hand, but I finished this fight. Some guys finish, and said no mas. Now, I’m healthy, and I’m ready mentally for this fight and I want to win. It will be the best fight in my pro career. I will put all my skill on the table.”

Said Barak: “I feel like if anyone should’ve felt pressured to fight even if they are injured, that it would be Teofimo and not Loma. Teofimo could’ve lost all opportunity if he didn’t go ahead as planned,” he told RING. “Loma could always get any fight he wants. So there was no reason to fight injured. Also, I don’t mind if fighters want to fight with injuries, because if they all waited to be totally injury free, then they would never fight. But the shame is in the excuse. Boxing is the most respected sport because it’s the ultimate form of competition; therefore even valid excuses aren’t accepted. This is war and there’s an unwritten rule that whether you win or lose, you must do so graciously. This is why fighters who win who do not hug their opponent after are booed. So when you agree to do battle and lose, it is disrespectful to present an excuse and attempt to diminish your opponent’s victory. Not to mention you dishonor the thousands of fans who placed bets in your name believing that if you decided to step in the ring, then you are prepared.” Ak (top left) and Barak (top right) chatted with Lopez before the Oct. 17 triumph over Loma. Their show runs on SiriusXM and DAZN.

Thanks to those fellas for taking the time. At the Fights with Randy and Gerry runs Monday and Friday nights, from 6-8 PM ET, on SiriusXM Fight Nation channel 156. The Ak and Barak show airs on 156 from 12-2 PM ET Monday thru Friday, and you can watch a video version put out by DAZN.

My Three Cents: The issue is nuanced, to me. Pressure is on any and every fighter to NOT pull out of a bout, after it’s been made, and that much more so the closer it gets to fight night. Sure, you can say, ‘If you are hurt, pull out.’ And in some cases, that’s OK. But for an A sider, there is often even more pressure to stay in, even when injured, because you can’t just plug in a replacement, and the show will go on, without effect.

Yes, when an obvious B side pulls out, a replacement can be inserted, and know what, sometimes that sub can be an upgrade. Like, Custio Clayton may be harder for Sergey Lipinets Oct. 24  (on Showtime) than Kudratillo Abdukakhorov, who couldn’t keep his Oct. 24 date with Sergey, because of a visa issue.

That video evidence, that’s mildly devastating, though I suppose one could choose to argue that it isn’t, if the interview was done, and then only after that did Loma’s shoulder again get to be so deteriorated.

I like Barak’s old school thinking, and I concur. The “right” thing to do would have been to lose gracefully, give the give full props, and go get surgery, get healed, and get revenge.

Yes, it is a nuanced issue…But when it’s boiled down, Loma didn’t make himself look better by publicizing the injury. Maybe it made him FEEL better, but look better? No.

The post The SiriusXM boxing talents weigh in on Loma’s loss explanation appeared first on The Ring.