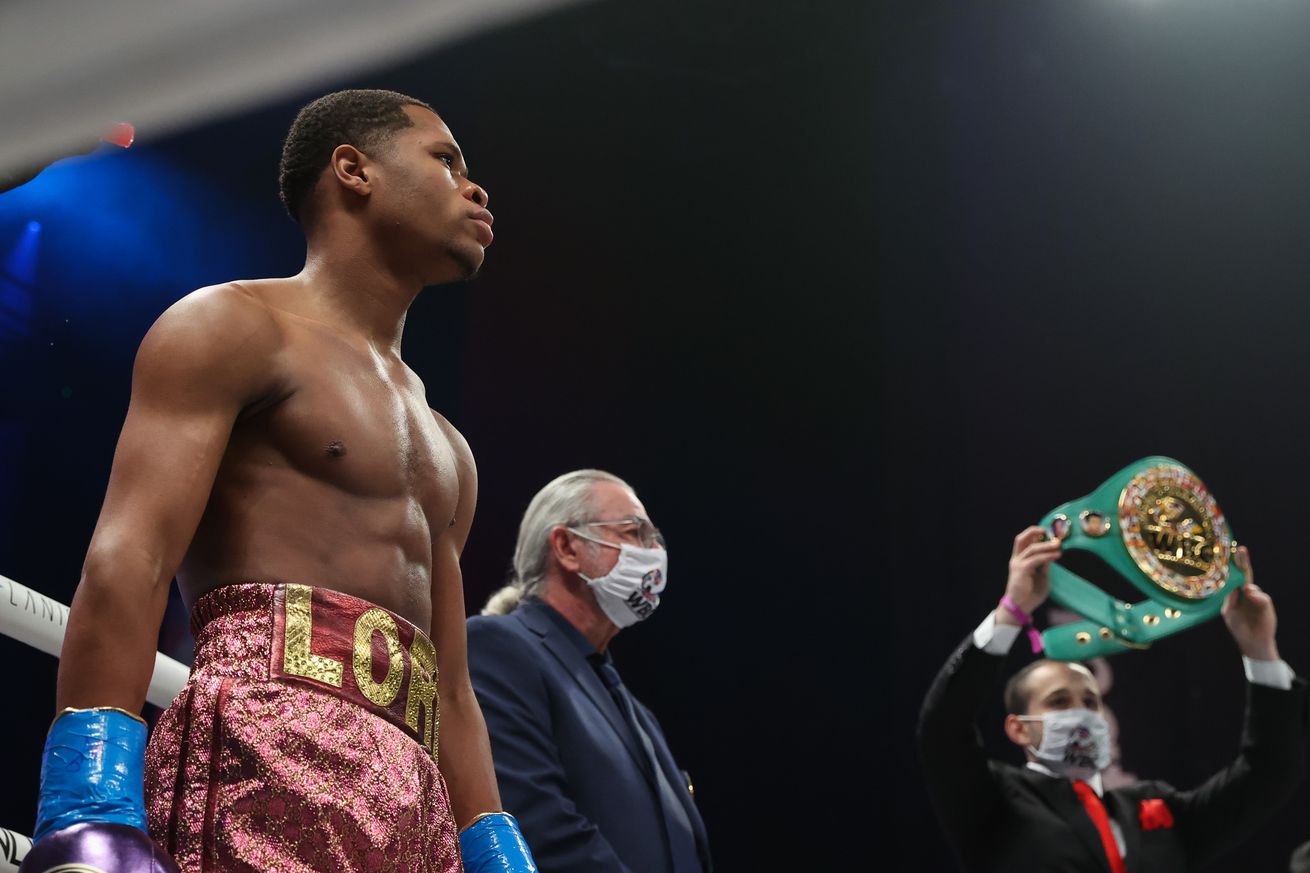 Devin Haney’s made a lot of statements, but hasn’t quite backed up his talk between the ropes.

He holds the WBC lightweight world championship, owns a 25-0 (15 KO) record, boasts the nickname “The Dream,” and, apparently, he believes he is the best 135-pound fighter on this and any planet.

In a press release out Nov. 11, Devin Haney made the contention that he’s better than Gervonta Davis, Ryan Garcia, and Teofimo Lopez, and stated for the record, “All I do is dominate.”

I cringed, literally, when I saw the release, and that bold bullshit headline about domination.

The cringe did not come out of the blue, there’s context to it. The context has to do with what Haney did this past Saturday night against Yuriorkis Gamboa. He labels it domination, and maybe that’s what he was feeling in the ring as he did 12 rounds with the soon-to-be 39-year-old Gamboa. And maybe that’s what his inner circle is telling him, but I’m on the record with an alternate take.

Young gun, you are a talent. But people have been blowing smoke up you for too many years about how talented you are, and I think maybe you have listened too intently.

You beat Yuriorkis Gamboa. Bravo. But I’d advise you poke around some Twitter timelines from Saturday night, because what I was feeling while watching wasn’t an aberration. People were yawning, people were opining that this fight was putting them to sleep, and I don’t see the upside in boasting so about that win.

Everyone expected you to win, and everyone also wanted to see you do it in fine fashion. By fine fashion, I mean not by showing us for 36 minutes that you are a good pugilist. They wanted to see a great fighter, they wanted you to show that what Gervonta can do, you can do better. And you didn’t.

No matter what your crew tells you, you didn’t.

I am not here to just send this message out, to critique and then put Purell on my hands and move on. I must take issue with myself. I haven’t been as honest as I should be, haven’t listened to my gut sufficiently regarding what you bring to the table for a while now. That is to my discredit. I listened to pundits and promoters and marketing more than trusting my own eyes. During too many minutes of too many rounds, in your fights going back to 2016, I sat, watched, appreciated some, but didn’t experience much surge in pulse. Good boxing, sure. But as the wins piled up, and the hubbub grew, I started wondering what was I missing.

And I better figured that out as I looked around on Twitter on Saturday, and looked and listened to what other folks were saying as they watched Haney-Gamboa. The lack of power and aggression in Haney fights means too many of the rounds look just like the one before, and the one that will come. There is just about no drama, because the defense is solid and the chin is good, but the pop is absent, or not being summoned as it could be. So that means you don’t get in trouble in these fights, and the other guy doesn’t get buzzed or stopped too often, either. Purists can watch and gush, but that is not a large crowd, man. They seem like a larger sample than they are, because some of them — not all of them — do a good job in crafting a preferred persona which leaves them feeling self-satisfied.

Not to get too deep on it, but some people advertising how much they adore the subtle nuances of majestic pugilists are painting themselves as a better breed. They sometimes dismiss fighters that guaranteed drama, like Arturo Gatti, and align themselves instead with the Floyd Mayweather types. Why? Because that signals that they are “smarts,” they are in the camp with Floyd, and not with the brutish masses. It’s a contrarian stance, and most are not even aware of the subconscious machinations going on while they proclaim their purity pledge as a “skills pay the bills” card-holder.

Bless those who can fight that style and pay the bills, Devin, because it’s true, down the line it’s the “smarter” way to fight. That is the style that pays off neurologically in 10, 20, or 30 years. Those who say fans and media won’t care so much or clap so loud when your “give and take” style helps result in brain trauma are correct.

I’m trying to say, it is complicated. And I get why more people in the last 10 years are employing a “defense first” fighting style. It benefits them, but doesn’t help build the brand of the sport. Watching fighters be judicious round after round and soak up data to sift and exploit just doesn’t draw in casual fans and keep them watching. And it’s not just you, Devin. What if we had done an exit survey on all the people who gave the Vasiliy Lomachenko-Teofimo Lopez fight a try, because they heard what a wiz Loma is, and then left the event puzzled as to why the guy many called the pound-for-pound best didn’t throw, let alone land, double digit punches in rounds one through five?

But unless more people with platforms actually talk about this dynamic, and push back when they watched a match that a majority of viewers found boring, and push back harder when that same match is pointed to proudly and deemed an exhibit of supremacy, then boxing doesn’t have much of a chance to pivot to go back in a direction that attracts more than about 150,000 hardcore fans in the United States.

OK, maybe it’s a few more than that, maybe less want to be Nielsen families these days and more are watching but not getting counted. But it’s not a big enough number to convince anyone but people with big dogs in the hunt that the sport is truly relevant and healthy and on an obvious ascent in popularity.

Bottom line time: enough of the press releases speaking of your superiority and social media chest thumps. Tell the people that need to be told that for your next fight, you want to fight Gervonta Davis, Ryan Garcia, or Teofimo Lopez. I bet one or two of them would agree to it. Now, you might not make the kind of money you think you deserve to fight one of those aces. Maybe you take $2 million, even though you think you deserve $3.5 million. Prove you want to show us that you are better than those guys.

And that same message needs to go to anyone else to whom it applies.

Way too many fighters come off as Godzilla in interviews, press releases, and social media. And then, come time to showing they mean business, it’s timidity time. Godzilla’s balls shrink down to ant size, and the focus is on check size. It’s boring as fuck, tone deaf at best, and passé as all hell. Everyone — myself and and anyone reading this — wants y’all to make great money for taking the risk. But it needs to be both, it needs to be payment in exchange for taking real risk — to your record and to your ego.

Don’t want to take my word for it, Devin? Take the word of the hundreds of thousands of fans we don’t have, who have given up on us as a sport, or should have been in the fold, but are choosing TikTok or Netflix or Tinder or whatever the fuck else, because they consistently get entertained when they are on those platforms.

I give half a COVID pass, I know that some of the 50-50 matches we all want and need to see won’t get made while this country flails about in response.

May I suggest, firmly, that everyone use this time to get into a reset mode, stop being the social media savages, stop awarding yourself figurative titles as the best in show. Start bringing that attitude to the ring, where it belongs and actually matters.