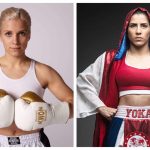 As boxing activity slowly returns to most of the planet, new opportunities have arisen to adjudicate Ring title belts in the women’s realm.

A new championship opportunity has been identified by the Women’s Ratings Panel in the upcoming fight between minimum weight No. 1 Tina Rupprecht and No. 3 Yokasta Valle, who will be fighting on Saturday, December 12 in Germany with the WBC and IBF titles on the line.

A special vote was requested from the panel, in order to comply with rule No. 2 of The Ring’s Championship Policy: “If a fight between the Nos. 1 and 2 contenders cannot be made and No. 1 fights No. 3, the winner may be awarded THE RING belt if the Editorial Board deems the No. 3 contender worthy.”

After a debate and a vote, the panel found Valle to be a worthy contender for the title, and therefore The Ring’s fabled championship belt will be on the line for the first time in the history of the women’s minimum weight division in the aforementioned fight.

“I feel very honored to fight for the Ring Championship belt as the first woman in minimumweight ever,” said Rupprecht, in a text message. “This title means a lot to me, because only the best boxers ever can fight for it. I have dreamed of this since I started boxing and I really appreciate this chance and want to make it come true.”

“I am super emotional and motivated about this possibility,” said Valle in a voice message from her training camp in Costa Rica. “I always saw that belt on other fighters, and I thought ‘I want that belt one day’. It motivates me to train even harder and I will leave it all in the ring to win this belt. This achievement will put me among the best fighters in the world, and there are no words to describe that feeling”.

Rule No. 1 of The Ring’s championship policy calls for a fight between the top two fighters from each division to face each other for the title. But No. 2-ranked Anabel Ortiz, from Mexico, is rumored to be headed towards a fight against Seniesa Estrada in the near future, and the possibility of a bout between two young titlists in a rematch of a close and competitive bout (Rupprecht defeated Valle by a close margin in Germany in June 2018) was enough to convince the panel to give these two fighters a chance to dispute the division’s vacant inaugural belt.

Furthermore, Valle’s career seems to be the one with the most momentum among the top three fighters in the division. The Nicaraguan-born Costa Rican fighter is riding a 7-0 streak after her loss to Rupprecht, including a title-winning effort abroad against Joana Pastrana. In that same period, Rupprecht only managed to go 2-0-1, with all of those outings being title fights at home for Germany’s “Tiny Tina.” Ortiz remains a formidable fighter, being unbeaten in the past eight years, but she has repeatedly signaled her intention to find one final challenge to end her career on a high note, and a bout with Estrada (an instant favorite in that potential clash) may provide her that opportunity.