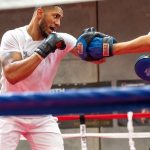 The attack came almost exclusively with right hands as the 2016 Olympic super heavyweight gold medalist overwhelmed his durable compatriot, using overhand rights to initially stun Duhaupas. Yoka (8-0, 7 knockouts) switched it up ever slightly, bringing an uppercut between the gloves to score the first knockdown.

Yoka continued that pattern once the mandatory eight count was finished, getting over to the side of Duhaupas (38-6, 25 KOs) to extend the right before scoring the final knockdown with another uppercut, bringing the fight to an immediate halt.

Duhaupas, 39, challenged for the WBC heavyweight title in 2015, losing by 11th round stoppage against Deontay wilder. In his other high profile matchup, Duhaupas was stopped in six by Alexander Povetkin in 2016.

The fight was shown in France on Canal+, but the 28-year-old Yoka, who is trained by Virgil Hunter, is likely to get a lot more exposure in the United States after signing a co-promotional deal earlier this year with Top Rank.

The post Tony Yoka blasts out Johann Duhaupas with two knockdowns in first round appeared first on The Ring.