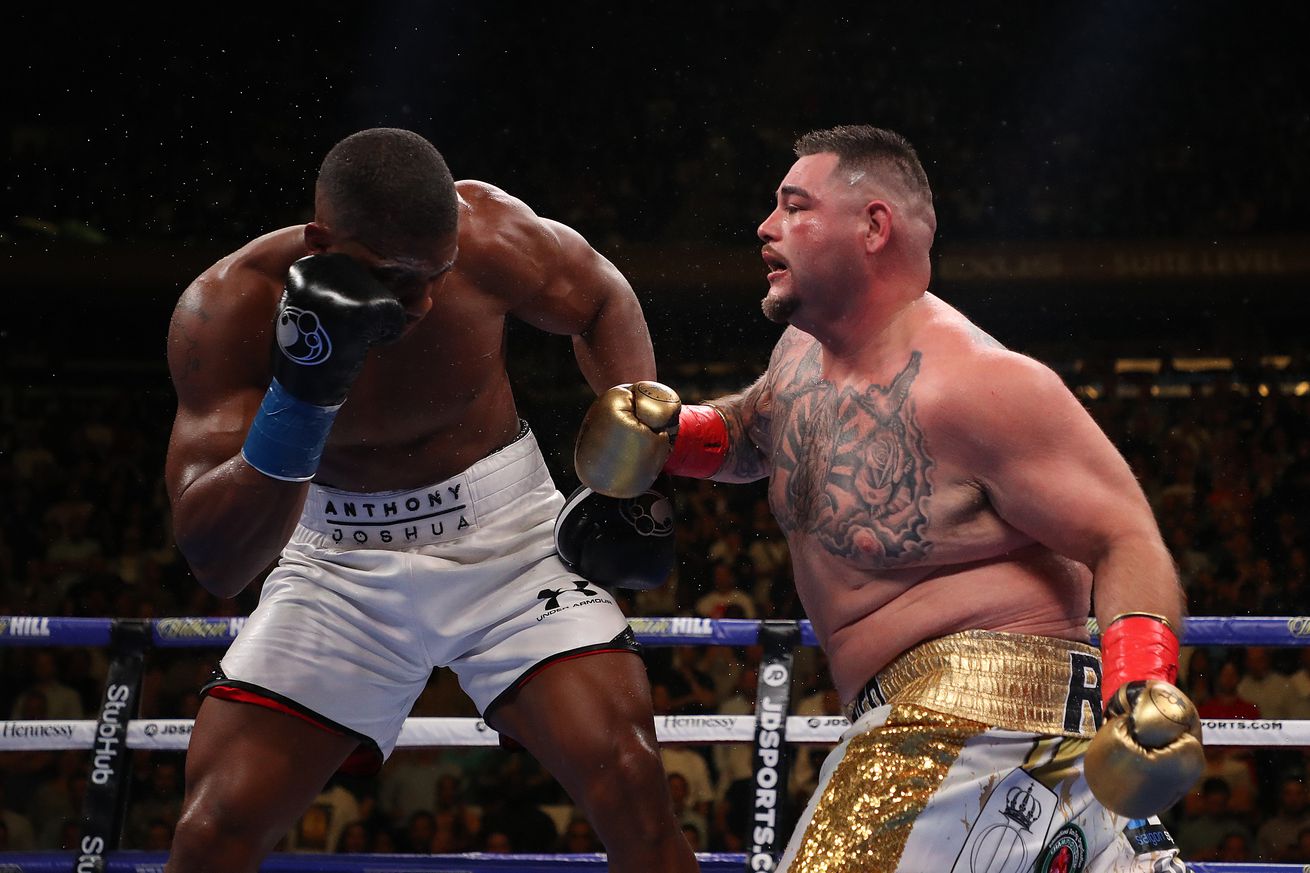 Andy Ruiz Jr stunned the world, and there are a lot of stories that go with that sort of upset.

This sport, this effin sport — it will humble if you take part in it, and if you opine on it from the pundit seat.

In theory, I should know better. I’ve been attending the rodeos for a coupla decades now. I have seen the broncos get busted, and I’ve seen the cocky cowboys get thrown time and again.

So I should have known better when I found myself thinking that maybe Anthony Joshua would be looking to make a statement in his New York debut, and send notice to any ghosts on patrol, the Alis and Fraziers and Louises, that he was also of legendary status, by knocking out chubby Cali boxer Andy Ruiz right quick at “The Mecca.” A part of me, a larger part of me, should have warned myself about books and covers.

Yeah, the sport humbles most all practitioners, eventually — and we in the pundit class quite regularly.

That was my top takeaway as I typed, after picking my damn jaw off that floor, in seeing Andy Ruiz tells the oddsmakers that their 20-to-1 call was asinine, when he shocked most of the world and stopped out Anthony Joshua in round seven of what was supposed to be a warmup to a more massive attraction for AJ, a getting-to-know-you special intro to the Brit for American fight fans.

Instead, boxing fans saw a chubby Snickers gobbler prove, yet again, that you got to fight the fights, because paper is one thing, and trading leather quite another. More takeaways.

This is why you make the fights in a timely fashion, because you just never know. You can build it up, prime the pump, make it so you gain that extra 10 or 20 million. Or maybe the effin thing blows up in your face, and maybe you wish that if you were Teams Wilder and AJ that you had found common ground, made Wilder vs AJ before AJ’s chin had been so checked and (maybe forever) wrecked. Learn a lesson, dealmakers, and don’t let greed override said lesson.

I didn’t like it one bit when I saw Ruiz was 268, weighing more than he did for his April bout against Alexander Dimitrenko. One would have thought he would have been in pare-down mode, and I feared, I admit, that he didn’t fully believe in himself, and thus wasn’t torturing himself properly, eating right in the weeks before this AJ bout. But books, covers. Grandma maybe told you that, and now Ruiz reminds you. “Don’t let my blubber fool ya, I can go.” Yes sir, you weren’t lying. You may be fleshy, but that didn’t hide the grit and ambition and hand speed and belief in self.

”I wanna say to Andy Ruiz, you are the epitome of don’t judge a book by its cover,” said Sugar Ray Leonard on DAZN’s post-fight show. Amen, SRL. (See this pic? They sent out a cropped version which dis-accentuated the extra blubber on the Ruiz torso.)

While we saw Ruiz and trainer Manny Robles celebrate, did you not think of others, people who maybe were in deep thought, and not in a victorious mindset? Eddie Hearn looked mildly shocked, and repeated two, three, six times how AJ would be bouncing back from this. It stings when your cash cow goes down four times. He has to be wondering if AJ is near done-zo at age 29.

Because of all the things to try and tweak or rebuild, the chin is the hardest. You have to work around that by revamping defense so that chin doesn’t get checked so easily again. (Hey, remember how AJ talked about what he’d learned from that Wladimir fight. Interesting in retrospect, right? Is he maybe still too muscle-y? And he said he was wanting to quit the sport if he had another rough outing. Well, that was a mega-rough outing.)

And others who had to be feeling a certain way. Poor Jarrell Miller. That opportunity that Ruiz scarfed up was his for the taking. That had to sting, if he tuned in and watched. And then Top Rank — Ruiz had been a TR boxer, but they didn’t re-sign the kid who had had motivation issues. And maybe that shove was what moved Andy over the hump, gave him the impetus to grind harder. For every guy who exults, there is usually a wake of sorrier souls left behind. Tears of joy, and tears of, well, the other kind, this event prompted both.

So I was on Twitter in the days leading up to this clash, and because I somewhat know better, that upsets do happen now and again, I asked the Twitterati for a show of hands for those picking Ruiz to upset Joshua.

No takers. Then, on fight night, my buddy Abe Gonzalez from Cali raised his hand. He picked Ruiz to win. “Kid is motivated and tough, Woodsy,” he told me via DM. “Don’t write the kid off.” OK, I told him, but without excessive certainty. Abe, you called it, my man. Props to ya.

Fuck it @Woodsy1069 , I’m taking Ruiz in an upset. There is something to be said when you keep hearing that you are “supposed to lose”. Think he will be very motivated tonight and is going to raise some eyebrows. Yea, I said it. lol

NEXT TIME, I CALL CHARR

Ya think maybe Eddie Hearn was kicking himself for that choice of Ruiz? He told Chris Mannix after that Ruiz was a bad style matchup for AJ, and a Trevor Bryan or Mahmoud Charr maybe would have been better suited for the big Brit. Maybe so, but you know what? No second guess from me on Eddie. He said coming in that Ruiz would acquit himself well, give fans a good bang for the buck. And damn it, he did; he gave that Garden assembly more than their money’s worth. But yeah, my guess is that choice ricochets in his head tonight and tomorrow. And maybe for a long spell after that.

Folks, please don’t do that, don’t go after a guy for acting in classy fashion in trying times. I saw people slinging arrows at the Brit for not being suitably crushed after getting stopped. C’mon, can these guys ever win? Hammer ‘em if they act dick-ish after a loss, and hammer ‘em if they act not-crushed-enough?

Listen to Ruiz talk about how he’d fight Joshua, weeks before the bout, on the Everlast TALKBOX podcast