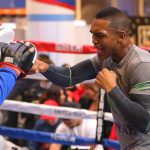 Tureano Johnson believes that Jaime Munguia is only a middleweight on the scale.

Johnson squares off against the former junior middleweight titleholder in a scheduled 12-round main event on October 30, when Golden Boy Promotions returns to the Fantasy Springs Casino in Indio, California.

“Body wise, Jaime Munguia is a full-fledged middleweight,” Johnson stated. “But mentally, he is not ready for this weight class.”

Johnson (21-2-1, 15 knockouts), who hails from the Bahamas but resides in Georgia, candidly explained to The Ring how the two defeats on his resume have become “his greatest victories.”

“I was making a lot of mistakes and getting away with it for a very long time,” he admitted.

In August of 2017, Johnson was dominated and stopped in the 12th round by three-time title challenger Sergiy Derevyanchenko in Miami.

“Sergiy Derevyanchenko exposed a lot of those mistakes, including my preparation.”

“In my 24 professional fights, I have faced more imposing opposition,” he added. “What does that tell you?

“It tells me that Munguia has been fed a lot of easy fights.”

Munguia last fought on January 11, when he knocked out Gary “Spike” O’Sullivan inside 11 rounds in Texas.

“Gary O’Sullivan is not a real middleweight,” Johnson said. “He should have never fought at 160 in the first place.”

In his fourth defense of the WBO 154-pound title in April 2019, Munguia outpointed Dennis Hogan in a highly-controversial majority decision that was widely panned across boxing circles.

“We all know [Dennis] Hogan got robbed,” he continued. “That was clear as day.

“But I love this fight. Jaime Munguia is tailor-made for Tureano Johnson.”

Johnson says that he doesn’t have to expose Munguia because “the world has already seen his flaws.” He adds that he won’t be shocked when his arm is raised.

“I plan to face his best assets head-on and take them away from him,” he added. “I have more dimensions to my game.

“Jaime Munguia is a one-dimensional fighter. When I dispose him, it will not only be a shocker to Munguia, but it will also shock the boxing world.”

But what about age?

Johnson is no spring chicken, and Munguia is 12 years his junior.

The cliché when it comes to boxing and other aspects of life is that “age is just a number.” The 36-year-old Johnson says not to worry.

“I can’t speak for Munguia’s lifestyle, but my body is a temple,” he stated. “I don’t drink, and I don’t smoke.