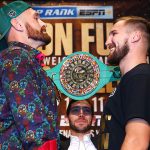 LAS VEGAS – Tyson Fury and Otto Wallin only have one more head-to-head before they headline at the T-Mobile Arena on Saturday.

They squared up at today’s final press conference but there was no bad blood and no ill-feeling, just mutual respect.

Fury is having his second consecutive fight in Sin City having dazzled in a one-sided win over Thomas Schwarz on June 15.

“I thought it was a fantastic evening of entertainment,” said Fury, of the evening he danced his way to the ring dressed as Apollo Creed. “I was here in Vegas and I had to put on a show. “The buzz was amazing, I had a great experience. I don’t know much about Otto but sometimes that’s a good thing. I know he’s good-looking, blonde hair, blue eyes and he’s just my type.

Wallin is grateful to be the man in the opposite corner.

“I was very happy,” he said of hearing the news of the big fight for the first time. “It dropped out of the sky. I talked to [trainer] Joey [Gamache] and he was all for it and it’s a dream come true. I come from a small place in Sweden and now I’m here and I’m ready to put it all on the line.”

Promoter Frank Warren is in town for his man Fury and said Tyson made a splash in the U.S. back in June. Fury is a promoter’s dream even to hall of famers like Arum and Warren, who realize that the heavyweight star has to take Wallin seriously. Photo by Mikey Williams / TOP RANK

“Tyson’s Tyson,” said the International Boxing Hall of Fame promoter. “There’s not another boxer that I’ve been involved with like it. He was punch perfect. [He made a] great entrance but the performance was outstanding. Obviously, we aren’t looking past Otto, anything can happen in boxing and Tyson’s got to be at the top of his game and he’s got to do what I know he can do. If he comes through this one it sets up the big one [v Wilder] Bob [Arum] and I have been working hard to deliver. There’s a lot at stake, Tyson can’t afford to take his eye off the ball.”

Arum, no stranger to putting on big fights in Vegas, said that the best fans in world boxing came from Mexico and the UK, so it made sense to have Fury entertain the Mexicans over Mexican Independence Day weekend.

“What better platform to show Tyson Fury, who we’re building up in this part of the world, then to show him in front of a big, big Mexican audience,” he said.

There’s some talk that Fury may walk to the ring with the legendary Julio Cesar Chavez.

But Wallin’s team are on hand to spoil the party.

His promoter, Dmitry Salita, said his man should not be ruled out.

“He’s beaten everyone in front of him, he’s been trained by Joey Gamache for over four years, he’s 20 and 0 and in the United States not a lot of people know who he is, but on Sunday morning he’s going to be the biggest name in sports,” said Salita.

“It’s a great opportunity,” said Gamache. “Tyson Fury is the top heavyweight out there. “Boxing is the sport of surprises and we’re looking to pull one this Saturday. I knew he [Wallin] had what it takes to be a champion. He had everything, we needed the experience and to build up and get us into that position, now we’re ready to take over.”