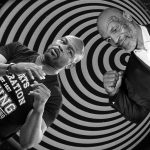 The announcement that 54-year-old Mike Tyson and 51-year-old Roy Jones Jr. will lace up the gloves again for an eight-round exhibition (but nonetheless pay-per-view) bout on September 12 in Carson, California, must have sounded to fight fans of a certain age like a plot from an episode of The Twilight Zone.

In fact, the pairing of these oldies-who-used-to-be-goodies might be just that.

For devotees of the classic television series which ran from 1959 to ’64, Tyson and Jones are standing in for Ida Lupino, a leading lady in films of the 1940s, who played a has-been actress in “The Sixteen-Millimeter Shrine,” which originally aired on October 23, 1959, on CBS. As fiftysomething Barbara Jean Trenton, Lupino’s character hunkers down daily in a darkened room of her dilapidated mansion, watching three-decade-old movies of herself being swept off her feet by dashing and youthful male co-stars. It was her way of refusing to acknowledge that time stands still for no one, that even onetime idols of the silver screen are as prone as anyone to the deleterious effects of the aging process.

This being The Twilight Zone, Trenton’s unrelenting desire to become her former self magically happens, with her middle-aged self transported from her couch in the viewing room onto the celluloid where she would forever remain the young, carefree beauty she had been in happier days.

Perhaps it should be noted that Lupino was 51 when she starred in that episode of The Twilight Zone, the same age as Jones is now and three years younger than Tyson, who, with the whiskers on his chin as stark proof, is literally a graybeard. No one can or should fault Iron Mike and RJJ for dreamily wishing to reach back to a halcyon period in their lives when they were gods of the ring, worshipped by their many fans and fabulously compensated whenever they stepped inside the ropes. Sugar Ray Leonard, now 64, several years ago addressed the inner turmoil that exists for any reasonably accomplished individual who has ceased to be what he once was and desperately wants to believe that past glories somehow can be summoned if only he wishes hard enough.

“You always think of yourself as the best you ever were. That’s human nature,” Leonard told me for a story I authored for The Ring in 2013. “And that’s not just how highly successful people think. Everyone thinks that way.”

It would be foolish, of course, for anyone, even true believers, to expect that the 2021 versions of Tyson and Jones on display will be anything other than pale imitations of their most formidable selves. But just as the fighters can dare to imagine going back to the future, so, too, can prospective PPV purchasers who are just delusional enough to think they can catch glimpses of the late 1980s or early ’90s versions of their  heroes, if only for a night or even a couple of rounds.

And who knows? Maybe boxing buffs who have not been granted live access to the sport’s current headliners because of COVID-19 might be disposed to gorge themselves on the Mike ’n’ Roy Show, which will include a 10-part docuseries on the multimedia platform Triller leading up to the bout.

Consider this: Had not the financing fallen through, there was a very real possibility that heavyweights George Foreman and Larry Holmes, then 50 and 49, respectively, would have squared off on January 23, 1999, in Houston’s Astrodome. That, too, was to have been a PPV event, with a suggested purchase price of $39.95.  One smarmy writer – OK, it was me – opined that the matchup of grandfathers could have been called  “Old Folks Home at the Dome,” but the likelihood is that hundreds of thousands of curious fight fans would have bought it, because it would have pitted two of the better big men in boxing history.

“There was interest, a whole lot of interest,” Foreman said of the proposed fight. “Larry and I were really in the mood to do it. When we met at the press conference in New York, we started selling woof tickets, the whole deal. And it would have sold; I’m sure of that. There was so much name recognition there.”

Here’s the difference, though. Despite the major mileage on both of their boxing odometers, many believed there was still enough of Big George and the “Easton Assassin” to make for an interesting and competitive matchup. There is little to suggest that Tyson – those YouTube clips of him pounding mitts in the gym notwithstanding – and Jones have retained more than tiny slivers of their magnificent primes, if that. Although there was some talk of a Tyson-Jones fight for real in the aftermath of Jones’ dethronement of the much larger (and considerably slower) WBA heavyweight titleholder John Ruiz on March 1, 2003, Jones fought just that one time in the big-boy division. Many skeptics did not think he really wanted to swap punches with Tyson, who even in a somewhat diminished state was much stronger, must faster and much more powerful a puncher than the plodding Ruiz.

No one can or should fault Iron Mike and RJJ for dreamily wishing to reach back to a halcyon period in their lives when they were gods of the ring.

It is only logical to believe that our more recent glimpses of Tyson and Jones, in actual competition, do not offer much hope that the September 12 exhibition will be action-packed. Tyson  (50-6, 44 KOs) lost three of his final four bouts, and while he can be excused for being stopped in eight rounds by fellow Hall of Famer Lennox Lewis, those unsightly defeats inside the distance to Danny Williams (2004) and lumbering Irishman Kevin McBride (2005) indicated that almost everything that had made the erstwhile “baddest man on the planet” had evaporated like morning dew.

Tyson, then 38, conceivably could have gotten past McBride had he fought on – he was ahead on two of the three scorecards at the time of the stoppage – but after six desultory rounds at the MCI Center in Washington, D.C., it was obvious to everyone that he’d had quite enough of trying to live up to a tigerish reputation that no longer fit his flagging mental state. “I don’t want to disrespect the sport that I love,” he said of his decision not to come out for the seventh round. “My heart is not into this anymore. I’m sorry for the fans who paid for this. I wish I could have done better, but it’s time to move on with my life and be a father and take care of my children.”

And what of Jones (66-9, 47 KOs), whose package of skills once was so bedazzling that it called to mind the very best of Muhammad Ali? Beginning in 2004 until his supposed farewell to boxing – a unanimous, 10-round decision over cruiserweight Scott Sigmon on February 8, 2018 – RJJ went just 17-8, including two three-bout losing streaks and all five of his knockout defeats.

“I don’t know of a single soul in our little universe of boxing who wants him to keep doing this (fight),” Jim Lampley, HBO’s longtime blow-by-blow announcer and a friend of Jones, said prior to the Sigmon bout. “We all know realistically that it’s certainly of no value to his legacy as a fighter.

“I’d be lying if I said that I never once made a comment to him or tried to engage him in a conversation as to why he was still doing this. The last time I did so, he made clear to me that, in his view, it wasn’t something he had to defend to me. He was going to do what he was going to do and that within our friendship it was important for me to accept that. I accepted it.”

Fiercely proud, Jones no doubt does not feel the need to defend this most recent puzzling decision to Lamps or anyone else. But if he would have been an underdog in a 2003 or 2004 go at Tyson, it stands to reason he will be much more so in September, even if Tyson is only as reinvigorated as he appeared to be in that YouTube video.

As Twilight Zone creator Rod Serling once said of Ida Lupino’s character in his opening monologue nearly 61 years ago, each participant on September 12 is a “great of another time, a once-brilliant star in a firmament no longer a part of the sky, eclipsed by the movement of earth and time … struck down by hit-and-run years and lying on the unhappy pavement, trying desperately to get the license number of fleeting fame.”

The post Tyson vs. Jones exhibition could be like old episode of The Twilight Zone appeared first on The Ring.