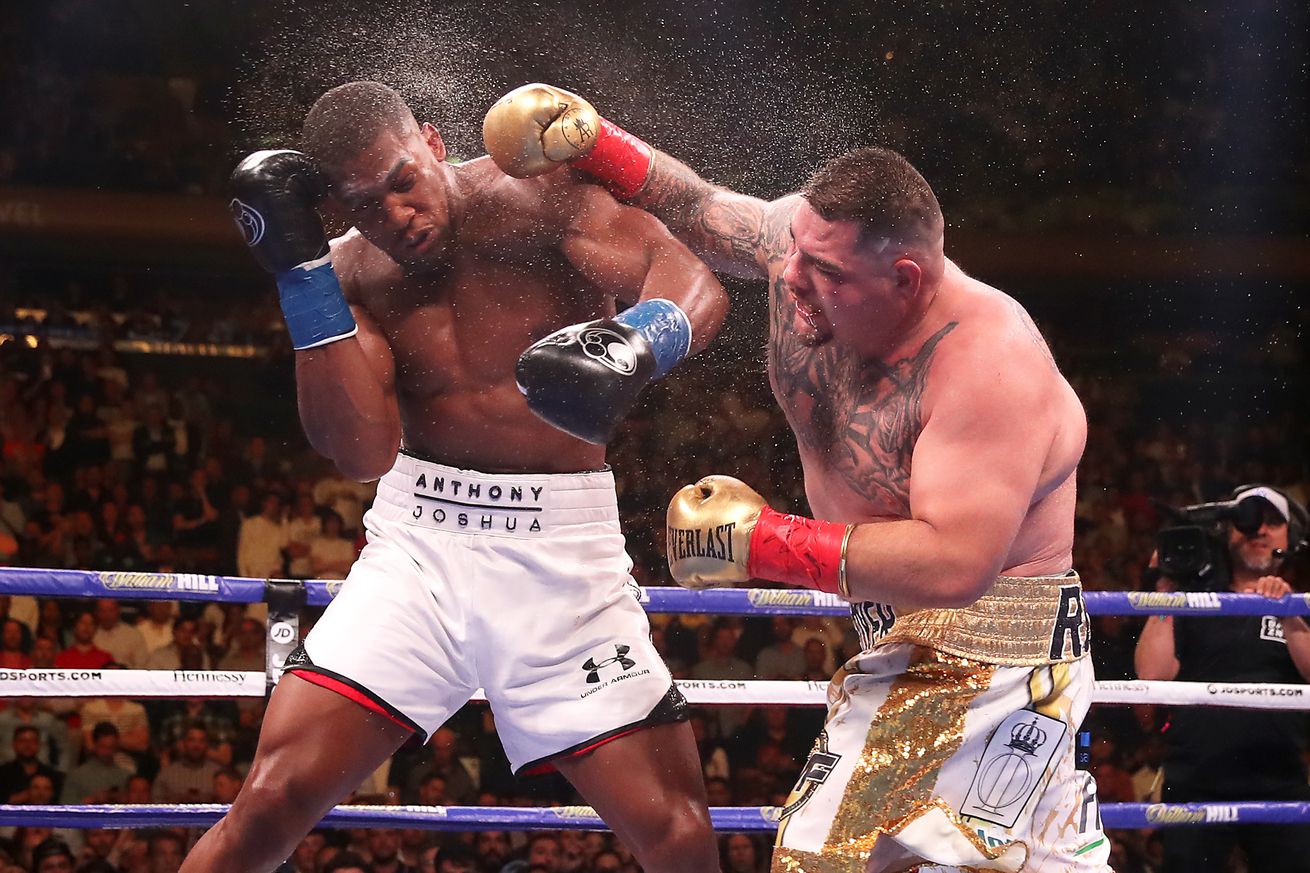 No upset in recent years has been nearly as big a story as Andy Ruiz Jr stunning Anthony Joshua last year.

It’s Underdog Week across SB Nation, and there aren’t many — if any — sports with greater underdog stories than boxing, and boxing’s heavyweight division in particular.

James J. Braddock became “The Cinderella Man” in 1935 when he knocked off Max Baer and became the world heavyweight champion.

Muhammad Ali was a big underdog against George Foreman going into the 1974 “Rumble in the Jungle,” the fight that made the “rope-a-dope” famous. Foreman, at 45, had the “it happened!” moment in 1994 against Michael Moorer, becoming world heavyweight champion again against the odds.

James “Buster” Douglas stopped the sports world in its tracks when he knocked out Mike Tyson in Tokyo in 1990, and Evander Holyfield was a huge ‘dog against Tyson in 1996, too, before he out-muscled “Iron” Mike and bent Tyson to his will. Hasim Rahman stunned Lennox Lewis in 2001. It’s a long list, these are just a few examples.

Last year, we added a chapter to the book in a big way.

Anthony Joshua came in 22-0 (21 KO) for his U.S. debut at the famed Madison Square Garden, where he was set to defend the WBA, IBF, and WBO heavyweight titles. Originally, the British superstar, who had won Olympic gold in 2012, was to face Jarrell “Big Baby” Miller, an unbeaten New Yorker who would have been a sizable underdog, but had a pot stirring sort of charisma that everyone agreed could help sell the fight.

Miller, though, failed a series of drug tests before the fight and had to be removed from the event; sometimes, we’ve seen fighters fail pre-fight drug tests, explain it away, and get to fight. But Miller failed three of them for a variety of substances. There was no saving that fight, but Joshua’s promoter Eddie Hearn set out on an aggressive search to save the event with a replacement opponent.

Various names were bandied about, but Hearn settled on Andy Ruiz Jr, a 29-year-old Mexican-American from California. Ruiz, who had just fought on April 20, so a June 1 dated seemed a bit questionable, but he pushed aggressively for it as soon as he got word of Miller’s failed tests — even before Ruiz’s own April bout.

“If the fight’s off and everything goes good (on Saturday), I’ll be ready for June 1 after April 20,” he said two days ahead of what would be a dominant win over Alexander Dimitrenko.

Soon, he was officially in as Joshua’s opponent. Those who didn’t know much about Ruiz dismissed him immediately just by looking at him.

Let’s be honest here: Andy Ruiz Jr is short and fat for a pro boxer. He does not pass the eye test. He’s not a jeans model. (Although he’s kind of actually become one since then.)

At 6’2” and with a soft, round body, standing him up next to the 6’6” Joshua, sculpted from marble, was a joke in the eyes of many.

And being completely frank, even those of us who warned not to completely dismiss Ruiz because of the body weren’t giving him much of a shot to beat AJ. Ruiz had good hand speed, a bit of pop, and could put punches together in combination. But what would he do against Joshua’s length and power? It was hard to see a path to victory, even if you found it insulting to ignore the man’s skills just because he didn’t, as the famed pro wrestler Dusty Rhodes once said, “look like the athlete of the day is supposed to look,” basically nobody was picking Ruiz to win. We sure didn’t.

“Height and reach-wise, Ruiz is about exactly the same as Alexander Povetkin,” I wrote then, remembering Joshua’s 2018 win over the Russian contender, continuing, “Povetkin was a very good amateur who never quite got over the the last hump as a pro because it’s the era of the giant heavyweights. The Klitschkos have given way to Fury, Joshua, and Wilder, three giants with very different body types. I honestly think Ruiz will do a little bit better than the super doubters expect, but he’s not going to come close to winning.”

Wil Esco added, “Andy Ruiz will come to fight, but he’s overmatched in the talent department, which is exactly what Joshua needs to look good in this showcase outing. I’ve got Joshua stopping him early.”

Patrick L. Stumberg said, “Ruiz has an eight-inch reach disparity to deal with, and though he boasts fast hands, I’m not sure the rest of him is sufficiently agile to weave his way inside without taking heavy fire. I expect a few fun rounds before Joshua catches Ruiz coming in and plants a seed of doubt that neuters Ruiz’s willingness to put himself at risk, leaving Joshua to rack up the rounds at range.”

Rounding out the crew, Lewis Watson wrote, “The fast hands of the Mexican have focused the narrative of a ‘potential slip-up’ for AJ, but without that concussive one-punch power, Ruiz will find himself working overtime trying to land attacks on the champion. He’s likely to fall short and fall in on occasions, leading to a Joshua onslaught. For all his faults, AJ is one of the most clinical finishers in the game — he’ll smell blood within the first three rounds. Joshua should be able to back up Ruiz fairly easily, with the stoppage coming after a barrage on the ropes.”

In short, we tried to be fair, all of us, and had our respect for Andy Ruiz Jr’s abilities and talent. But no, we did not think he would win.

It didn’t look like he would. Joshua dropped Ruiz hard in the third round, and it looked like it was all going the way the doubters imagined it would, with AJ too tall, too strong, and too good for Ruiz. He was going to blow out the “chubby kid” from California in short order.

Andy Ruiz Jr had scored one of the biggest upsets in boxing history. The fight that hadn’t been on the radar for many outside of boxing’s diehard fan base suddenly became the biggest story in the sports world for the next week or so.

In a rematch six months later, things didn’t go quite so well for the new defending champion. Ruiz was clearly and admittedly severely out of shape for their bout in Dec. 2019 in Saudi Arabia, and Joshua was able to cruise to a decision win, taking his belts back and winning so handily, so devoid of any drama, that a rubber match hasn’t even really been considered.

Ruiz also parted ways with trainer Manny Robles — though most are in agreement that the lack of preparation was on Ruiz, not Robles — and recently linked up with star trainer Eddy Reynoso.

The story may or may not end there. Andy Ruiz Jr is still just 30 years old, and could have some great nights ahead of him as he embarks on a comeback. Or he may just have that one truly great night. Either way, he’s got his name in the big book of boxing history for good.