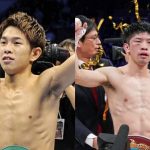 For months it had been rumored that Kazuto Ioka would defend his WBO junior bantamweight title against highly talented compatriot Kosei Tanaka.

Ioka, who is rated No. 3 by The Ring at 115 pounds, finally made the news official on Monday at an online press conference, and the bout will take place at the Ota-City General Gymnasium in Tokyo on December 31.

The 31-year-old claimed titles at strawweight and junior flyweight before losing for the first time to IBF flyweight titleholder Amnat Ruenroeng.

Unperturbed, the Japanese star rebounded to best Juan Carlos Raveco (MD 12) to win the WBA belt in that division. He made five defenses, including a rematch victory over Raveco (TKO 11) and then surprisingly retired from the sport in 2017.

Tanaka won the WBO strawweight title from Julian Yedras (UD 12) in his fifth fight and made one defense against Vic Saludar (KO 6). He then moved up to junior flyweight and won the vacant WBO title in impressive fashion, taking out former beltholder Moises Fuentes (TKO 5). He’s made two defenses, notably outboxing Angel Acosta (UD 12).

The Japanese star soon outgrew that division and edged Sho Kimura (MD 12) to win the WBO flyweight belt. He made three defenses against Ryoichi Taguchi (UD 12), Jonathan Gonzalez (TKO 7) and Wulan Tuolehazie (KO 3) before vacating the title in order to move north one again.

As per WBO rules, Tanaka 15-0 (9 KOs) was installed as the 115-pound mandatory challenger.

The 25-year-old claims to be ready and now seeks to join Ioka as their country’s only male four-weight world titleholders.

This looks like being the jewel in the crown of the now annual Japanese New Year’s Eve fight cards in Japan. It looks to be a can’t miss fight between two excellent professionals in the talent-laden junior bantamweight division.