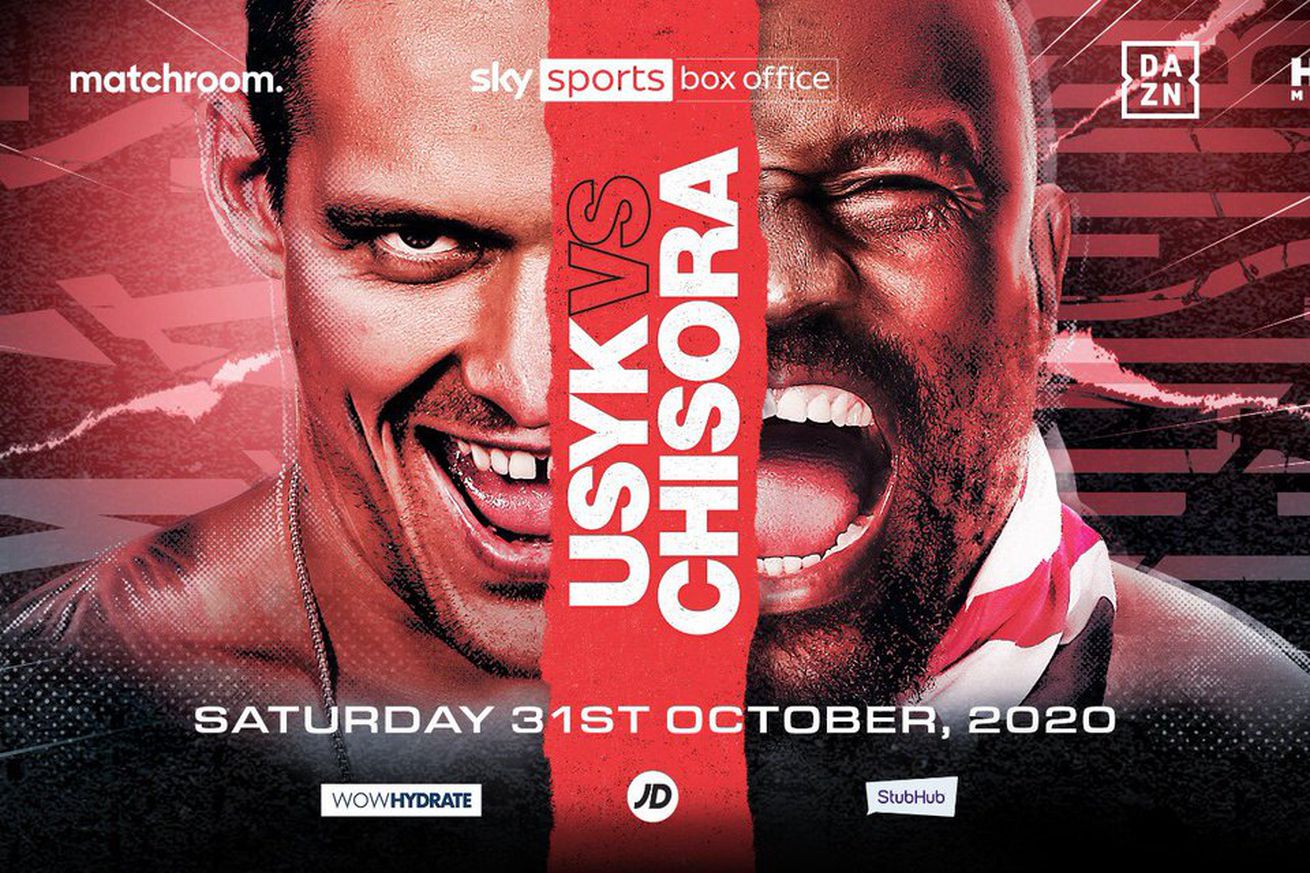 A May 23rd date fell through due to COVID.

Well, they did say it was close.

More than six months after their first date got canceled, Oleksandr Usyk and Dereck Chisora are officially set to go at it on October 31st.

Shamone Motherf*ckers! It’s on!!! Time to hit the accelerator not the breaks! #UsykChisora @skysportsboxing @dazn_usa pic.twitter.com/mrdECaqXqa

Stateside viewers can enjoy the card with their DAZN subscription, while UK viewers can catch it on Sky Sports Box Office.

Usyk (17-0, 13 KO) needed just 16 fights to establish himself as one of the greatest cruiserweights ever, defeating the likes of Krzysztof Glowacki, Michael Hunter, Marco Huck, Mairis Briedis, and Murat Gassiev before capping off his 200-pound run with a one-punch KO of Tony Bellew. With little left to conquer at the weight, he vacated his unified titles and made for heavyweight as Matchroom gleefully announced that “Usyk [was] coming.”

Injuries and opponents withdrawing for various reasons have held him to just one fight since 2018, a seventh-round stoppage of Chazz Witherspoon. He faces a far stiffer test here, which he acknowledges.

“I have really missed boxing,” said Usyk. “I am working hard in my training camp to show a spectacular performance on October 31. I expect a real test in Derek – he is strong, tough and resilient. He is a really big guy and he hits hard.

“As a Cruiserweight, I reached the highest heights as Undisputed Champion and now I am following the same path as a Heavyweight. I need to test myself against world class Heavyweights on my new road to Undisputed and Derek stands in front of me.

“Many people say that Derek is a monster, but deep down he is a kind man. I don’t expect to see that good side of him. I know that he wants to break me, but I am water, wind and fire all together. Derek Chisora, I am coming for you!”

Chisora (32-9, 23 KO) is painfully inconsistent and a remarkably unpleasant fellow outside the ring, but when he’s on, he can give practically anyone issues. He’s 5-1 since a surprise majority decision loss to Agit Kabayel, pushing Dillian Whyte to the limit in that one defeat and scoring some ridiculously brutal finishes along the way.

“Helllllo, Usyk, I’m ready for you, helllllo Usyk!,” said Chisora. “Usyk, I’ve been ready for you all year. It’s my home turf and after such a tough year for everyone, I’m going to give the British public the Halloween party they deserve and finally get revenge for my boy Tony Bellew!”

The UK just released a fresh set of COVID guidelines, forcing the organizers to hold this card behind closed doors, but Eddie Hearn’s rolling with the punches.

“Yesterday’s news from the Government was a kick in the nuts, so to bounce back with this fight at this time is so important for boxing,” said promoter Eddie Hearn. “You’ve either got to sit back and say ‘it’s not possible’ or find a way to make it happen, and I’ve got to say a big thanks to Team Usyk, ‘Del Boy’ and David Haye for staying patient and helping get this over the line.

“It’s an absolute firecracker and a fight that’s so important to the Heavyweight division over the next few months. We saw a stunning victory from Povetkin recently to shake up the mandatory situation, can WAR Chisora spring the upset and KO the undefeated Undisputed World Champ? I know he will do everything he can to try and get the victory and this will be another night of Heavyweight drama!”