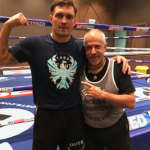 On the way over to the arena, Russ Anber, the mega multi talented Canadian fightgame lifer, who’ll be in the corner for his man Oleksandr Usyk, against the Brit vet Dereck Chisora, checked in with RING.

Chisora may be the leader in the Best Boxer Halloween Costume for his “war” paint look at the weigh in….But Anber, handwrapper, cutman, chief second, is thinking the ex cruiser standout from Ukraine will be the leader in that ring at the SSE Wembley Arena in London, and get his hand raised in the heavyweight tussle put together by Matchroom, and screening on DAZN.

“I think we see Chisora going balls to the wall trying to impose his size and power on Usyk,” said Anber, who you’ve seen in the corner of Vasiliy Lomachenko, and contributing considerably to the growth of Deontay Wilder, before Wilder decided to make his squad smaller a couple years ago. “They don’t think he can take the power for 12 rounds. I see Usyk being wary of getting into a punch-out with Chisora early and then stepping on the pedal and wearing Chisora to the point of exhaustion!” Dereck Chisora’s costume game was ultra strong on Friday. But on Oct. 31, in the ring, will he again get the better of Usyk? (Mark Robinson photo)

Noted; and how has the fight week been in that bubble? Many of you know that promoter Eddie Hearn tangled with COVID. He told Ak and Barak a few days ago on SiriusXM that he went to Antigua for six days after COVID isolation. Out of 650 people tested in the Matchroom COVID bubble, it is funny, he said, that he was the only one who tested positive. His symptoms left him tired and drained. “People say COVID-19 is a joke, and it honestly isn’t,” Hearn said. “I felt like it was just the flu, so the more vulnerable people should be more protected and those who are strong should kick in and get the economy go back to normal.”

“The bubble time has been good,” said Anber, who started working corners in 1979. “The bubble was well done here.”

And Usyk (17-0 with 13 KOs; age 33) always looks calm and collected. Like when Chisora let him smell what he had for breakfast at the weigh in (below, in Mark Robinson photo). Has Anber seen any nerves on display from Usyk during down time at the bubble?

“None that I have seen,” the Canadian pugilism expert said.

By the way, Anbers’ thought this week have been on the Canadian promoter Regis Levesque, who passed away on Tuesday, Oct. 27.

Anber, of Rival boxing gear, told Mitch Melnick that he’d been tested eight times for COVID this month. He called Regis the “greatest boxing promoter” in that region, of all time. “He took boxing with limited talent and he built stars and he made them everyday heroes,” he continued. Levesque did things super savvy, without a marketing degree, Anber said. He’d write an article, basically, and put that in to the newspaper, as an ad. Levesque, who was 85 when he succumbed to cancer, was often the star of a presser, he said, because he was so charismatic. He had more of an impact on the sport, period, for a non athlete, more so than any other being, in the Montreal-Quebec area. (Click here to learn more about Levesque.) Usyk , rated No. 1 by the WBO, read his bible, often making the sign of the cross as he found passages that speak to him in the dressing room. We are guessing he wasn’t thinking much past Chisora (32-9, age 36; has been stopped three times), to what could come next if he wins, which is perhaps a date with Anthony Joshua. (If Joshua still holds the WBA, IBF and WBO straps in a couple months.)

Anber has been with Usyk for about nine fights, and believes rust won’t be an issue. Usyk last fought a year ago, against Chazz Witherspoon.

But tonight, what is Anber thinking will be the result?