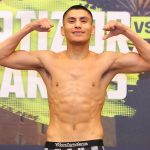 “The Future of Boxing” is ready for a title shot.

The two warriors were initially supposed to square off March 28 at The Forum in Inglewood, California. Two weeks before they were set to do battle, the ongoing coronavirus pandemic shut down their plans, though their willingness to face one another did not fade.

Ortiz entered the ring without head trainer Robert Garcia, who tested positive COVID-19 virus earlier in the week. As a result, his father Vergil Sr. took over the helm, but that certainly didn’t play a factor, as Ortiz annihilated Vargas.

The undefeated Ortiz dedicated the fight to fallen junior middleweight Travell’ Black Magic’ Mazion, who was killed in a car accident on July 16. Mazion, who was unbeaten, would have turned 25 on fight night.

Ortiz, a native of Dallas, Texas, established his dominance from the onset. He popped Vargas with two sharp jabs behind a tight guard.  About 45 seconds into the round, he caught Vargas with a left uppercut. Then Ortiz subsequently battered him with a slew of right hands to the head went downstairs with vicious lefts from the body.

Vargas had a better second round as he moved Ortiz into the ropes and landed with a pair of jabs to the body, but he took some damage to do it. circled around him and took over control in the center of the ring, backing him up with his jab, and bloodying his nose.

The jab continued to have a brutal impact in the third round. Ortiz continued to punish Vargas, but he did his best to try and stay out of range but was often unsuccessful.

Ortiz dished a beating on Vargas in round four. He punished the Toronto-based Columbian with a plethora of left hooks to the head, straight right hands, and a variety of shots downstairs. Somehow, Vargas stayed on his feet and convinced the ringside doctor that he was still in good shape.

Vargas made a good case for himself as he had his best round of the night in the fifth. He landed during several exchanges on the inside. Ortiz was still dictating the pace, but he suffered a cut on his left cheekbone due to an accidental headbutt.

Ortiz went back to the basics in the sixth round, flicking his jab in the face of Vargas, who continued his pursuit of counter opportunities to the body. Vargas managed it to make it out of the round and to his credit, took Ortiz deeper than he ever has in his pro career.

But in the end, it was a small victory, because the seventh round would ultimately be the end. Ortiz wobbled Vargas with a right hand and a left hook. Then he uncorked a huge combination that sent Vargas stumbling to the canvas, taking Ortiz with him. Referee Jack Reiss then scolded Vargas for the foul.

Bur Ortiz (16-0, 16 knockouts), 22, went right back on the attack, pounding on Vargas until the end of the round. Immediately after the bell sounded, Reiss decided he had seen enough and halted the action.

Ortiz, who scored his first win of the year following a four-win 2019 campaign, called out two former titleholders.

“I would like to fight someone like Danny Garcia or (Keith) Thurman,” he added. “I believe that those are very good fighters that I want to see if I can beat, so let’s make the fights happen.”

In the build-up to the fight, Ortiz also said that he would be willing to face WBO titlist, Terence Crawford.

“I want to fight Crawford,” Ortiz said. “He’s a very skilled fighter, arguably among the top five pound-for-pound fighters in the world today, and very smart. I’m very open to fighting him. That’s probably the easiest fight to make in boxing right now.

“I’m ready to take any opportunity thrown my way. I understand how hard it is to make big fights these days, so if I received an offer to face Crawford; I would take it.”